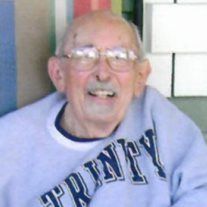 Frank Andrews Stone, second son of Ruth Sherman Andrews and Royal Amidon Stone, was born in Wilmington, DE, January 12, 1929. Barbara May Tinkham and Frank were married on the Tarsus American College campus in Turkey on June 15, 1956.

Frank was appointed as mission personnel to Turkey through the by the American Board of Commissioners of Foreign Mission (ABCFM) a predecessor mission body of what today is Global Ministries.  Frank served in Turkey 953 – 1968 as a teacher and administrator at the Tarsus American College, and as a professor at Hacettepe University in Ankara.

Frank went on to become a Professor of Educational Studies at the Neag School of Education at the University of Connecticut for twenty-five years. After attaining emeritus status, he worked five years as a part-time adjunct professor at Trinity College, Hartford, CT. Frank was a visiting scholar at the Middle East Center, University of Utah, Salt Lake City, UT and at the American College, Tarsus, Turkey in 1992.   He was an ordained minister of the United Church of Christ and did supply preaching and pastoral counseling.

Frank is the author of ten books and many published book reviews. He wrote more than seventy journal articles. He was the founding editor of Current Turkish Thought (Redhouse Press, Istanbul). He was the editor of Cutting Edge, the journal of the Society for Educational Reconstruction (SER), for four years.  He was the organizer of the World Education Fellowship (WEF), Connecticut chapter in 1971. Also in 1971, Frank and his associates formed the World Education Project (WEP) at the Neag School of Education, University of Connecticut, that later evolved into the Isaac N. Thut World Education Center (TWEC).

Frank was able to keep in touch with a dozen of his former students at Tarsus American College. He was the major advisor for about fifty master’s degree theses and doctoral dissertations now in the University of Connecticut’s Babbidge Library. His archive is at the Hoover Institution in Palo Alto, CA. He was recognized with a WEF International life membership, the Gertrude Langsam Award of SER, a citation from Firat University, Elazig, Turkey, and an award from his alma mater, Heidelberg University.

Memorial donations may be made in memory of Frank Andrews Stone to the Andrews International Education Scholarship Fund, which will provide financial support for a graduate student(s) in the field of International Education, UConn Foundation, 2390 Alumni Drive Unit 3206, Storrs, Connecticut 06269.  Memorial donations also may be made to Heidelberg University, Frank and Barbara Stone Scholarship Fund, 310 E. Market Street, Tiffin, Ohio 44883.