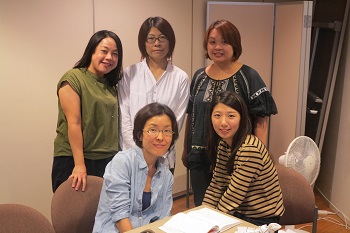 For the past several years I have been involved locally here in Kobe with twelve churches that sponsor an annual Fresh Air Retreat for families from Fukushima. This year six mothers and thirteen children came for a week of fun and relaxation. Kobe City is far to the southwest of Fukushima, which means that mothers feel comfortable allowing their children to play freely outside. Now, five and a half years after the nuclear disaster, most Japanese have stopped thinking about the stark realities in Fukushima. What I share below is a summary of a conversation I had with five women who are involved in hosting the annual Fresh Air Retreats.

Yuri: “I have been involved for the past four years. It has been an eye opening experience for me to realize that these families live in such a different reality from my own. They lack that basic sense of safety which I have taken for granted my whole life. Mothers have to constantly worry about the health of their children. Each time I interact with the children they reveal to me how difficult their lives are back home.”

Satoko: “My role as a yoga instructor has been to lead a yoga class for the mothers. I found that the mothers this year were much more stressed out than ever before. I think our relationship with them will gain in importance with each consecutive year. At first they were so tense. I tried to crack some jokes, but nobody laughed. By the end of our time together however, they were beginning to relax, and the expressions on their faces showed me that the class had been good for them.”

Hitomi: “For me, I think it is important to involve myself in the lives of my neighbors. Most people feel that as long as they don’t go to Fukushima, the realities there have nothing to do with them. But I think that as Christians we are called to see the lives of our neighbors as a part of our own lives. So I want to learn about their lives, and know what I can do for them. As I interacted with the mothers this year there were times that I found myself speechless, lacking the words to encourage and comfort. At such times though, they would reach out to me with kind words. I thought to myself that they shouldn’t have to be comforting me!”

Nobuko: “I am a mother of one elementary school age boy. I grew up near a nuclear plant, and my mother was quite active in demonstrating against the presence of nuclear plants in our rural area. So I grew up sensitized to the dangers of the nuclear industry. For me it is a real blessing to be involved with the planning of these retreats. These mothers are raising their children in Fukushima, just as I am raising mine here in Kobe. They don’t have the choices that I have to buy vegetables from safe areas. I always think about what I can do for them. I live so far away. I know I can show my support and solidarity in a monetary way. These retreats are a way that I can involve myself during the year in their lives. This brings me great joy.”

Keiko: “I am a pastor, and I serve as the representative of the planning committee. I have not interacted too much with the participants, but rather have tried to make sure that the retreat runs as smoothly as possible. One mother told me how impressed she was that Christian churches continue to provide these retreats, and that they are open for anyone who wants to join. This year at the farewell party, I apologized to one of the mothers for not being able to do more for them. She responded by saying, “No, even though you live far away, it is so important for us to know that there are people like you who continue to think of us in this way.”

Most parents in and around Fukushima are anxious to provide a safe environment for the health of their children. Some are more sensitive to the unknown dangers of radiation than others. They know that expressing their doubts and fears about the safety of their living environment can lead to jeopardizing relations with neighbors and friends. At the same time, these parents do not want to leave their homes, because that would mean starting their lives all over again. Such families are caught in a highly stressful situation, and are provided few opportunities to vent their frustration. Three mothers who participated this year reported that they are having difficulties in their marriage. One mother told us that she has had her child wear long-sleeved shirts and long pants all year round for the past five years. These retreats provide a place for the mothers to share their deepest concerns. They are also greatly encouraged to connect with like-minded people.

The realities in Fukushima are so far removed from our daily lives. The women I spoke to who host the annual Fresh Air Retreats shared their own struggles to be mindful of the lives of those who continue to suffer on account of the nuclear disaster. Again this Christmas, UCC and Disciples churches around the US will be sending Christmas cards to our partner churches in and around Fukushima, lifting them up in prayer during Advent. I am reminded of Jesus’ mother Mary who witnessed the sufferings that her son faced, and “pondered these things in her heart.” I am thankful for all people who have the vision and imagination to reach out globally through prayer. I hope Advent this year will be a time where we can “ponder these things in our hearts” as we pray for God’s promise to all peoples “Peace on earth and good tidings to all.”