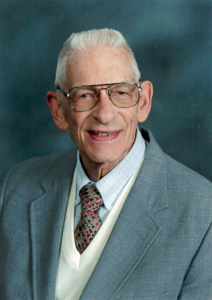 Marshall “Frisco” Gilchrist passed away at home in Indianapolis, IN on August 29, 2016.  He was born August 8, 1922 in Nebraska to the late Allen Kay and Edyth Viola (Wilson) Gilchrist. He was married to Bertha G. Jacobs in 1949; she preceded him in death in March 2006 after 56 years of marriage. Frisco is survived by his brother, Darwin Gilchrist.

Early in life, Frisco served as a mission-appointed pastor for a war-time Community Church in a housing project for the Puget Sound Naval Base. Later, he taught school in Illinois as well as Tennessee. Not long after earning his Master’s degree in Education, he and Bertha accepted a mission assignment to Paraguay in August 1952 through the United Christian Missionary Society, a predecessor mission body of what today is Global Ministries.

Frisco and his wife lived and worked in Paraguay for 24 years, serving with ministries of the Disciples of Christ Church of Paraguay.  Frisco taught several years at Colegio Internacional in Asunción and served as its director.  His work in the field of church leadership training and development of Christian education materials led the Gilchrists to live in Coronel Oviedo in rural Paraguay for several years.  He participated in the writing of Christian Education materials in Spanish that were widely used throughout Latin America.

Frisco was later drawn to a different path in helping disenfranchised people and communities in Paraguay. Through his work in Friendship Mission, Frisco became the coordinator of teams of social workers who developed educational and vocational opportunities for indigenous, rural, and urban poor communities to better their lives. As a result of this work, in 1976 Frisco was detained by the regime of Paraguayan dictator, Alfredo Stroessner.  The late Robert Thomas, former President of the Division of Overseas Ministries, and William Nottingham, who at that time served as Area Executive for Latin America and the Caribbean, obtained Frisco’s release; the following day he was ordered by the regime to leave the country.

After returning to the states, Frisco became Co-Director (together with Paul Wilson) of the International Human Rights Office of Division of Overseas Ministries/Disciples Home Mission, Christian Church (Disciples of Christ). His task was to observe and call attention to both abuses and actions in support of human rights, especially in the Americas, Europe and the Middle East.  He spent several months in Jordan, Syria, Israel and the occupied territories for the purpose of strengthening church contacts.  He worked on bringing about an international presence in Honduras by visiting refugee camps and settlements along the border of El Salvador, and in early 1985 he participated on a pastoral mission of presence in Central America at the request of the Lutheran Church of the Resurrection in San Salvador.  Frisco retired in 1987.

At the time of his death, Frisco was an active member of Central Christian Church, Indianapolis.