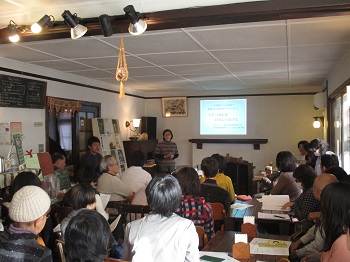 This past year has been a tumultuous year for the world in so many ways. Japan has had its share of issues that are cause for deep concern. At the Bazaar Café, (our church’s coffee house ministry) we continue to be a venue for lectures and forums to inform about urgent and pressing social justice issues, as well as a place for people to come together in solidarity.

One of the issues that unfortunately has been ‘forgotten’ in most parts of the country is the continuing grave situation of the nuclear disaster in Fukushima. The levels of radiation in certain parts of the prefecture are far greater than is safe to raise children, but the government has gone ahead and lifted the evacuation orders in certain towns, which were evacuated after the disaster. This means some families are returning to their homes which are arguably still unsafe. Meanwhile efforts to clean up the nuclear contamination at the reactors continue to discover serious challenges.

On January 7th, we invited Terumi Kataoka, from the Aizu Radiation Information Center, which is a project of our partner church in Fukushima. The Center continues to offer information on radiation levels, counseling and support for evacuees, and advocacy regarding nuclear issues. After five years of meeting energy needs without nuclear power, the government is moving forward to restart nuclear power plants in other parts of Japan despite much protest among citizens. Many citizens believe that nuclear power is too risky in an earthquake prone country and feel the future lies in other natural energy sources like solar and geothermal energy.

Our event at the Bazaar Café drew a crowd far greater than expected. There were families with children, students, and activists attending. Also in attendance were several women from Fukushima who had evacuated after the accident almost 6 years ago. One of the women shared the despair of many like herself who are facing an unknown future at the end of March, which is the time limit the government has set for housing support for many evacuees. The city of Kyoto is also ending its housing support for those evacuees from Fukushima.

However, these women do not feel it is safe to return with their children to the still contaminated town. One real concern is the increased rate of thyroid cancer among children in Fukushima. The government is moving forward as though the disaster is past, but the reality is that many grave issues remain.

That day the Bazaar Café was able to offer a place for people to meet and offer their love and solidarity with those who are in fear and anxiety. Hearing the update from Fukushima gave many of us a renewed sense of conviction to keep up the advocacy for a nuclear free world and to keep speaking the truth to power.

Please keep in prayer Fukushima and all those who suffer from nuclear disasters, as well as all who work for a nuclear free world.

Martha serves at Doshisha University, Kyoto, Japan through the Council on Cooperative Mission. Martha is a professor of social welfare. Her appointment is made possible by your gifts to Disciples Mission Fund, Our Church’s Wider Mission, and your special gifts.