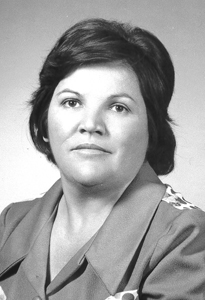 Genoveva (Veva) Cordova Del Pilar was born in Ciales, Puerto Rico.  She graduated from Centerand Morovis High Schools, and then received a BA degree in Education at the University of Puerto Rico.  Veva was married to the Reverend Luis Del Pilar in November of 1953 and they had five children: Reinaldo, Raquel, Abimahel, Ruben, and Alba. Veva was a loving and supportive wife, partner, and mother.

Genoveva taught school for the Puerto Rican Department of Education, the Catano Christian Church Academy, and at the Calle Comerio Christian Church Academy.  In 1973 Luis and Genoveva were appointed as missionaries, through what is now known as Global Ministries, to serve at the Colegio Internacional (International College) in Asunción, Paraguay.  In their October 1974 newsletter, the Del Pilars mention that Veva taught English in the kindergarten and pre-school evening sections of the International College.  They also served the Villa Aurelia Disciples of Christ Church on the outskirts of Asuncion.  Veva was well remembered and loved in Paraguay, especially as a Pre-school teacher in a school sponsored by Villa Aurelia Christian Church.  Also, she helped her husband in tasks related to Colegio Internacional.  The Del Pilars concuded their missionary service in 1982 and returned to Puerto Rico.