Give Back the Song: Choose Another Way Home 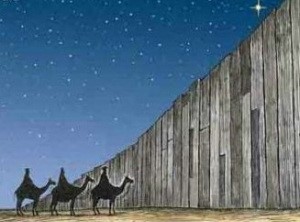 For lo the days are hastening on,
by prophet bards foretold,
when, with every rolling years,
still dawns the Age of Gold,
when peace shall over all the earth
its ancient splendors fling,
and all the world give back the song
which now the angels sing.

Verse 5 from It Came Upon a Midnight Clear

January 6th marks the manifestation of the light, the day in the Western Christian calendar that the Wise Ones arrived at the manger. In Latin America, this is El Día de Los Reyes, a day when the Kings come bearing gifts for the children. When los ricos, the rich ones, bend to something bigger than themselves and share their surplus wealth. Sometimes it is also the celebration of Jesus’ baptism.

In the Orthodox Churches, however, it is Christmas because they are following the Julian calendar. Their epiphany will come on January 18th. And in some parts of Ireland, it is Women’s Christmas, a day when the women take a break from their domestic chores and celebrate together the joy of the season. And still, for others, it is the official end of the holiday season – the taking down of the tree, the packing up of the Christmas decorations, the return to “normal.”

For me, this first Sunday in Epiphany, when the light was manifest to the world, is the anniversary of my ordination, the official recognition by the church of my calling to ministry. It has been twelve years now. I chose this day because it seemed appropriate that I should join the stargazers, the Wise Ones, in their search for truth, the ones that were the first in the New Testament to commit civil disobedience.

When I was young, I loved singing We Three Kings with the alternative verses: “We three kings of Orient Are, tried to smoke a rubber cigar, it exploded and imploded and now we are only two.” Later, I focused on the strange gifts that the kings brought—frankincense, gold, and myrrh. These hardly seemed liked things suitable for a baby.

I rather thought, like Jan L. Richardson’s Wise Women, that the holy family needed useful gifts: water for labor’s washing, fire for warm illumination, a blanket for swaddling.

In seminary, I read commentaries about the gifts being symbolic or suited for the different roles Jesus would play later in life: gold for royalty, frankincense for a priest, and myrrh for embalming; his death already foreshadowed at his birth. Still, I thought some baby presents would have been nice. At least the Drummer Boy gave him a song everyone could enjoy.

The Magi came in search of the Christ Child, the king of the Jews.

They came from the East, most likely from modern day Iraq or Persia. They were seekers, stargazers, priestly pagans, contemplatives seeking truth. They were non-Jews. They were Gentiles. They were us.

I think it is significant that Jewish shepherds and Zoroastrian Magi are the first to experience the light. The secular, the occult, and the sacred compose one whole in Matthew’s birth narrative. All become attentive to the divine and bring gifts in recognition. In a time when religious people and their leaders were fighting about everything, I find it interesting to note that Matthew’s gospel does not mandate either a Jewish or biblical hope before coming to the Messiah. What is essential is to show up, to fall on your knees, and offer something. What is essential is to be ready to sing back the song that the angels sing. Seeing and hearing are not enough. You must make an offering of what you most treasure.

Your star gazing, your trust in dreams, in the road not taken before, in refusing to bend to anyone or anything other than your God will present challenges for you and imperial authorities. Writer John Berger says that tyrants fear storytelling because all stories refer to the story of their fall. Beneath the glitter of oriental pageantry of the Wise Ones is the story of ruthless power and infanticide. Herod cannot bear the story of another king.

From the beginning, the Wise Ones reject paying homage to Herod’s imperial authority by refusing to bow to him and instead bow and worship the newborn king. Furthermore, they refuse to return to the court and tell Herod where he is, so by necessity and conscience they chose another way home.

Father John Dear, a veteran peace activist, in his Advent Reflections for 2007, states that their acts of non-cooperation prepare us for the meeting of the God of nonviolence: “When one first meets the God of nonviolence, one’s first act is to worship. The second is to repudiate the false imperial gods, disobey standing orders to partake of killings, and third head back on a different path, resist the culture of violence.”

Repudiating the false imperial gods of money and security is not easy for any of us. It is easier to sing the tune of Away in a Manger than O Little Town of Bethlehem without a wall. It’s even easier to read about wicked Herod as a tyrant from long ago than see his embodiment today in Israel’s shoot to kill policies which include the targeting of children or to see his inhumanity embodied in our own immigration policies to separate children from their parents at our own border, to lock or cage them like animals.

Jesus, the Prince of Peace was born in a time and place where there was a Roman occupation and no room for his birth. We celebrate his birth with the Wise ones by following our own dreams, stars, roads to new birth, and by returning home another way.

The Wise Ones decided not to collaborate in facilitating Herod’s raid on the Holy Family. Rev. Kate Jones Calone asks us to ponder the significance of the fact that God chose to move this salvation story forward through these holy non-collaborators who understood it was unjust and unwise to serve as Herod’s enforcers.

The question, then, is how are we not only following our own star but refusing to serve as enforcers of injustice? How is the community of Seattle, this church, standing up for asylum seekers at our border who like the Holy Family that fled to Egypt, are fleeing violence in their home countries?

How are you helping your police force draw the line in becoming collaborators with Immigration and Customs Enforcement (ICE) in tracking down and turning over undocumented individuals? How are you making sure they are learning how to de-escalate in times instead of using excessive force? Are you making sure they are not receiving military training from Israeli police forces? Are you standing up for the rights of all our children, including Palestinian children who can be locked up at age 12 for allegedly throwing a stone?

Civil disobedience or holy obedience lies at the heart of our epiphany stories. The Wise Ones received an unjust order from a vindictive tyrant. They disobeyed and defied him. What tyrant leaders do we need to defy or disobey? What unjust laws or practices do we need to challenge? What new lawmakers need our support?

The Wise Ones included women. The Wise Ones today include women too. They include the over five million women in India who formed a human chain of resistance to say no to gender bias and violence this week. They include our newest female representatives in Congress who not only bring different gifts to the table but who want the table to be dismantled or even overturned. They refuse to bow to the entrenched male authority figures of either party and support each other’s right to dance, to call for tax increases for the rich.

We sing back the song the angels have sung by refusing to co-operate with imperial authorities wherever they are and whenever they demand us to bow to them instead of our God.  And like the Wise Ones, who not only followed the light of the star but became lights themselves of nonviolence, we too are asked to return another way home, to reject the path of violence and to bear the Christ light ourselves.

From God’s fullness,
we all receive room.
Life and light,
divine access and grace-filled flesh
belong to us all.

We give thanks for the Word
who assures us that the light
will never be overcome by darkness.
May this light widen our vision.

May we become welcoming fires
in empires’ shadows.
May we see how the story
of God-with-us
invites our participation.

May we live Christmas
all year long.