By Global Ministries (Disciples of Christ and United Church of Christ) on March 02, 2020 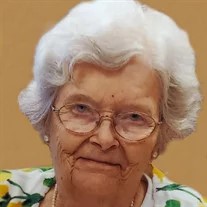 Betty was born January 4, 1931 in Fairport Harbor, Ohio, to Roy and Irene Greig. Betty attended high school in Chardon, Ohio. She then attended and graduated from The Ohio State University in 1952. While in college Betty met James R. Stricker at the Baptist-Disciple Student Center and they were married March 15, 1952.

Betty worked with the Jewish Women’s Council of Chicago as a Nursery School Teacher from 1956 until 1957 and helped to establish the Head Start program at the Cape Girardeau Civic Center from 1968 until 1970. She co-led a Girl Scout troop for many years and was an active member of her church.

In January 1979 Betty and James were appointed by the Division of Overseas Ministries, a predecessor body of Global Ministries, to serve with the United Mission to Nepal. Betty served in various roles to provide support for fellow mission co-workers in the capital city of Kathmandu as well as those working in rural areas around Nepal. Betty and James served in Nepal until the end of their term in 1982.

Upon retirement, Betty and Jim transitioned to life in a travel-trailer and spent 14 years traveling, both domestically and abroad, while wintering in Arizona. After a time living in Boise, Idaho, they moved back to Cape Girardeau in 2013 and settled at Chateau Girardeau.

Betty loved the wonders of God’s creation and wanted to explore as much of it as she could. With their children, the family traveled the U.S. and Europe. She always was quick to notice the beauty of the natural world around her and eager to explore the richness of human history.