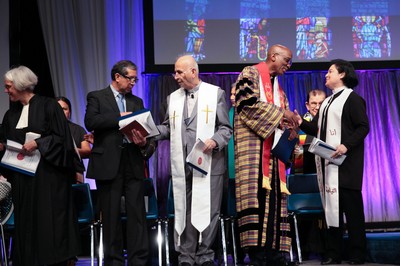 Rev. Victor Makari, a member of Highland Presbyterian Church, Louisville, KY, is a mission co-worker for Global Ministries. He is jointly appointed with the Presbyterian Church (USA) and serves the Diyar Consortium as a consultant for religion and state.

The National Middle Eastern Presbyterian Caucus recognized two Presbyterians for their many years of service to the church ― the Rev. Najla Kassab and the Rev. Victor Makari, who was awarded the Fahed Abu-Akel Award. The honors were announced at a dinner sponsored by the caucus.

General Assembly Stated Clerk J. Herbert Nelson, II told attendees: “We’re in a nation right now that is struggling to get along with its neighbors, whom the United States treats “as if some people are less than others.” Nelson said being in Israel and Palestine recently was “as devastating as being in South Africa during apartheid.”

On a positive note, he added, “I think today was a watershed day for us. … We got out in the streets with the people of St Louis. In the past seven weeks we raised $47,000” (to be used to free people jailed for minor offenses who couldn’t afford to pay cash bail for themselves).

Nelson said his “mama always taught me” that when you invite someone into your house, you treat them right, because you’re representing your house. “In America,” he said, “we are not representing out house well.” In this case he was referring to families being divided by immigration officials at the U.S.-Mexico border.

Rev. Najla Kassab said that when she was in seminary in 1998, she told herself, “If I ever am ordained, I want to be ordained by my people.”

Kassab is the first woman to serve as president of the World Communion of Reformed Churches. After graduating from the Near East School of Theology in Lebanon and Princeton Theological Seminary in New Jersey, she became the first female minister in the National Evangelical Synod of Syria and Lebanon.

“Today is a celebration,” Kassab said, but the greater celebration to come will begin when there is peace in the Middle East, and when women are routinely ordained in the region.

Kassab expressed gratitude to everyone who “hears the suffering and joins the effort” to make that greater celebration happen.

Makari, the Fahed Abu-Akel Award recipient, said: “I cannot take all the credit. … In fact, God chose so many of us to be the planters, thinkers, field workers, for this thing to grow.” He encouraged Presbyterians to keep smaller churches in mind, because such churches “receive little financial support ―very, very little ― but they contribute a great deal.”

Makari has served with the PC(USA) for more than half a century.

Keynote speaker Andrea Zaki noted that the so-called “Arab Spring” started in 2011, almost eight years ago. “Fear is something dangerous,” he said. “The thing with the Arab Spring is, we broke the line of fear.” One outcome of the movement, he added, was “rediscovering (the) role of women and youth.”