God’s Justice: A Note from Tuadale 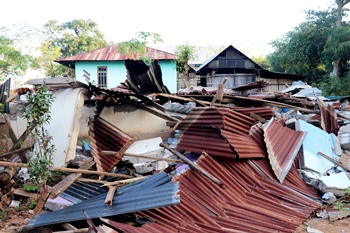 My house* and those of my two children have been destroyed; three houses. I was born here in Tuadale and born in GMIT [the Evangelical Christian Church of Timor]. It was the same for my father. Our principle has always been that GMIT is our church. My hope now is that GMIT members throughout this province will help us. I am 70 years old. As a human, my time is slipping away—my knees are stiff, I’m losing my hearing, my sight is poor, my brain is slowing—my physical strength is eroding. My wife and I can’t move as we once did. Yet God continues to bless us so that we can accept these changes. Facing problems in life is normal, but it was hard when our house was torn down because I want to be buried here on the land I own...God’s justice is eternal.

Grandpa Ferdi (pseudonym) spoke simply, but with passion. I was not the only one dabbing tears on cheeks that did not stay dry for long that afternoon in June. One person after another spoke, with anger, but also incredulity about their plight. How was it possible? Late in May, eleven homes that housed 59 individuals were bulldozed to the ground and the wells in their yards filled with debris by a court order. When I and a small group of pastors from the GMIT Synod office visited, the families had already been living in two GMIT church buildings in adjacent neighborhoods for a week—rolling out mats at night and rolling them back up in the morning, cooking over open fires behind the churches, soothing restless children, making plans for the very pregnant mother in their midst, trying to maintain hope.

The challenges faced by GMIT’s Humanitarian and Natural Disaster Response Unit are not just logistic, but are challenges to faith and justice as well. We learned during our visit that the land in Tuadale has been contested for several years. Despite having land certificates and evidence of residency spanning several generations, people were still forcibly removed from their homes as the result of a successful takeover by the village mayor who even had his maternal uncle’s home destroyed. The mayor, also a member of one of the two GMIT congregations housing the displaced families, claims he is the legal owner of 130 hectares and that all others who live there do so only as a result of his family’s permission (hibah). The land he now claims covers an entire village plus a nearby freshwater lake that has been a major source of income for families who fish there. The land also sits atop a high plateau with stunning vistas of the sea—a prime piece of real estate with great tourism potential. It seems this is, indeed, the backstory, for police, judicial, government, and, perhaps, even some church officials all appear to be implicated in what is unfolding in Tuadale. As of now, details remain sketchy.

Tensions are running high. It was a Monday morning when the bulldozer flattened 11 houses; that night, an unknown individual or individuals burned down the mayor’s house and that of his son. Some of the men who lost their houses and were displaced earlier in the day have been arrested and are being held in jail, accused of arson, but their pastors say they were praying together with these men in church that night. An additional piece of the story is that the mayor’s house was being guarded by two police officers and there is evidence of their presence in the form of a burned police motorcycle and uniform.

The GMIT Synod has mobilized some aid, providing two large fiberglass tanks and water to fill them. Others have donated rice and sleeping mats, and GMIT’s Advocacy and Justice Unit has made initial efforts to provide legal aid for the detainees as well as the displaced peoples. Although some feel the need is urgent to find alternative land for the families to settle on, the families themselves are unwilling to move. There have been believable threats that another batch of houses is scheduled for demolition in September, and more after that until finally the whole village is gone. The local pastors, who exemplify calm bravery in their accompaniment of their parishioners, wonder if the GMIT church buildings will also be targeted. The families living in the churches are concerned that if they move it will simply facilitate the destruction of their village. So, a short-term strategic decision regarding aid is to try and provide the families with tarps they can pitch as tents, still inside the church compound, but that can provide a modicum of family privacy.

Grandpa Ferdi’s statement, simple as it is, is profoundly theological. In the midst of his distress, he has space in his heart to acknowledge God’s blessings. He expresses his longing to be buried, in accordance with a common local practice, on the land where he and his parents before him lived their entire lives. However, the theological punch line is the last thing he said to us the day we visited: God’s justice is eternal. Grandpa Ferdi didn’t want to talk about love or peace or mercy, but about justice because he knows that God’s justice is not the justice of a corruptible judicial system or of angry revenge. It may not be readily visible, but God’s justice will outlast, and outweigh, every single other disaster that may come his way; that may come our way. Once again, it is the victims of injustice who inspire and inform my faith. May they also strengthen yours.

* Photo of one of the 11 homes destroyed in Tuadale Village.
Courtesy of Rev. Wanto Menda, GMIT’s Officer for Information and Communications (Infokam)