Goigoi is in an extremely remote area of Mozambique, cut off from Mozambique’s major city and the headquarters of the United Church of Christ in Mozambique (UCCM). The region is heavily impacted by its history and the decisions made by colonial powers from the 1900s. The Mozambique/Zimbabwe border divides the Ndau people and left the Ndau of Mozambique isolated from the rest of their fellow Mozambicans by geography, and also isolated from the Ndau in Zimbabwe by an international border. The effect of the isolation and having two different colonizers has left the Ndau in Mozambique far less developed than the Ndau in Zimbabwe.

The United Church of Christ in Mozambique has focused priority attention on Goigoi in recent years. The initial phase of development was the building of an elementary school. This was negotiated with the Ministry of Education in Mozambique. Education was the first priority for the community.

The second phase is the development of a farm which will serve as a source for food and employment for the people in the community. The project will serve families in the community and help Gogoi continue on the path toward development and sustainability. The farm is being developed with the help of the United Church of Christ in Zimbabwe (UCCZ) across the international border. The farm at Goigoi in Mozambique will provide food for the 200 to 250 families that live in the community. The current food situation is tenuous at best and families currently scrape out an existence which is heavily impacted by malnutrition and hunger.

The project will employ a farm manager as well as workers, primarily women, from the community. Workers compensation will be modest, provided to recognize time worked during the clearing, planting, tending, and harvesting of fields. The initial plan is for cultivation of crops with the potential to later expand into the raising of animals to provide eggs, milk, and meat, as well as the added income. The farm also will serve as a means for education and training for the community, as a whole, and for its youth, in particular.

Collaborations over the beginnings of the farm at Goigoi have served to strengthen the relationship between the UCCM and the UCCZ. The UCCZ has long been the recipient of mission funding. Assisting Gogoi is an opportunity for them to reach out and help others. While Zimbabwe continues to face its own share of issues, including limited financial resources, their outlook is “the little we have, we share.”

The third phase of building at Goigoi (along with the school and farm project) includes the construction of a church building and the development of a secondary school. As is the case in much of the world, the church building will function not only as a place for worship but as a community center and a base for other development work happening in the community. The work in Goigoi, school, agricultural project, and church community, is a strong expression of the UCCM’s theology, which is very similar to Global Ministries priority of Critical Presence . . . being present to God’s people and creation at the point of deepest need: spiritually, physically, emotionally, and economically.

In order to help this remote area, the United Church of Christ in Mozambique has established the following programs: 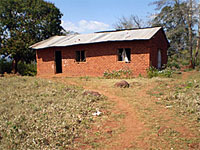 Construction of the Church:  Following the strategy first used by the missionaries to bring the people to God and educate them, the first building to be set up at Gogoi farm was the church.  Although small in size, it had the power to call the community to worship the Lord.   This same church building was also used as a classroom to teach young children, taking them out of the activities of herding cattle and illiteracy.

Construction of the classrooms:  Because so many children began attending classes it was deemed necessary to build more classrooms.  A lack of funds led to the first two classrooms being built in 1993 out of very precarious materials, i.e. rough wooden poles thatched with grass.  In 2008, with the financial assistance from Global Ministries, the church managed to build a modern and beautiful building with three classrooms out bricks, roofed with corrugated iron sheets.  This has encouraged more children to attend school.  The local government was very happy by this very significant contribution by the church to the community and the school building is the best in the area.  More is still to be done with the construction of the Administration office and the Headmaster’s house, which is an obligation according to the Mozambican law.

Water:  Although water is not very far from the mission, the church found it necessary to bring the water nearer to the school children.  Therefore, a well with a manual pump was located at the school premises. 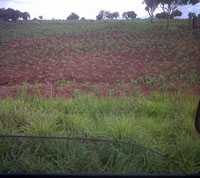 Agriculture:  The church has found it necessary to produce food to feed the local people and others and, since this a non-profit project, the products will be sold at a reduced price enough to sustain the project.  For the agriculture year 2011-2012, and as an experimental step, the church opened a cornfield of approximately 25 acres but only planted approximately 12 acres of corn and two acres of sesame.  The fields were ploughed manually and have no irrigation system.  The first stage of the corn was very promising, giving hope for a satisfactory harvest while taking into account the technology used.

Since this is a nonprofit project, the aim of farming was to sell products at a reduced price but with enough profit to sustain the project.  For the agriculture year 2012-2013, the church opened a maize field of approximately 24 acres but only planted approximately 12 acres of maize and two acres of sesame.  Crops were raised with only manual plowing and with no irrigation system, hoping that there would be enough rain.  The first stage of the maize was very promising and gave hope to getting a satisfactory harvest taking into account the technology used, but at the end of season the result was worse than expected due to drought. unfortunately, there was not any profit.  Due to the negative result in production in this two years of the experiment, there is a strong desire to install an irrigation system at Goigoi farm from a nearby water source.

There is still a problem of housing at Goigoi Mission. There are no houses for teachers and the headmaster. Teachers have to walk long distances to school and this situation affects the educational quality for the children because most of the time the teachers arrive late to the classroom and at times they arrive tired especially during the hot season.  Funds are needed to construct housing for the teachers and headmaster.

For this year's season (2013/2014) 14 acres have been prepared for maize and four acres for sesame, which is an increase from the 2012-2013 season.  A good harvest is expected due to the weather forecast which seems to have good rain predicted for the season.

There is a growing concern about the political stability in this region of Mozambique, which may cause some challenges for the Goigoi farm project, but also makes the produce grown on the farm more important for the surrounding communities.

Goigoi community members, especially in the area of the farm, were very isolated with few encounters and shared discussion of their concerns.  Due to the presence of the church and mission activities, there are now signs of change.  People come to work at the farm and together they discuss their concerns.  Even the issues of land and modern agriculture are being discussed.  There seems to be a transformation in community members with each one seeing the level of his/her responsibility in development issues. 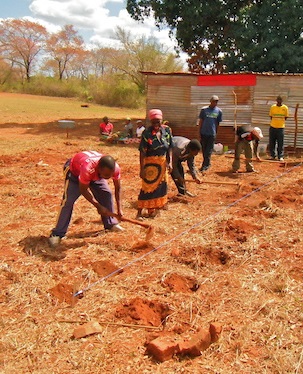 While there are several projects occurring in the Goigoi region, the United Church of Christ in Mozambique has placed a special emphasis on seeing the success of the farming initiative. The Goigoi farm has the potential to provide sustainable food items for the community, such as maize, carrots, cabbage, and spices. The Goigoi farm has experienced low production in the past two farming seasons. The reason for the lack of growth and production stems from having a limited water supply for the farm. An irrigation system is a very feasible opportunity to increase farm production at Goigoi farm. There is a water source close to the farm, where the irrigation system could connect into. The success of Goigoi farm is beneficial to the entire community through providing healthy food options at a low price, offering the opportunity to learn agricultural processes, and uniting the community with a common bond.

The Goigoi Development Project continues to be a priority of the UCCM. In recent years, the UCCM constructed three classrooms for primary school education. Teacher salaries for teachers at the Goigoi primary school are provided by the Mozambique Ministry of Education. Additionally, the UCCM has built restrooms for the school, which were not included in the original construction of the classrooms, and the UCCM has installed a borehole with a manual water pump in Goigoi.

For the agricultural project at Goigoi, the UCCM continues to make every effort to improve the crops each year. After several years of harsh droughts and then the passing of two destructive cyclones in 2019, the agricultural project at Goigoi has faced challenges in producing the amount of vegetables and grains as originally planned. In the 2020-2021 growing season, the UCCM is planting sesame, maize, and potatoes at the Goigoi farm with hopes and expectations for a good season.