Going to Deir Yasin to Remember

Insanity housed
upon atrocity
generations ago
so nothing should show
so no one would know
when those who witnessed are gone. 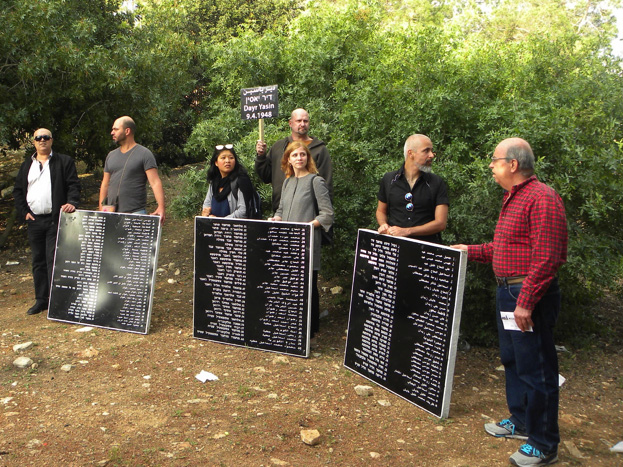 I chose suffering on Orthodox Easter Sunday, on the day we Protestants poke our fingers into the wounds of the still bleeding Christ with doubting Thomas. I chose to go on a different kind of procession - with a group of repentant Israeli Jews and a few interested foreigners to a place that most wish to forget, a kind of hell on earth.

I chose to go to that once prosperous village located on the high ground between Tel Aviv and Jerusalem, the village where 130 commandos of the Irgun and the Lehi (Stern Gang), under the authority of the Haganah, assassinated and burned over 254 men, women, and children. I went to not only one of Israel’s depopulated villages but the village where the largest massacre took place, the one that led to a massive and frenzied exodus of other Palestinians from their homes in fear. I went to Deir Yasin.

I went because I was compelled to go and bear witness and learn the frightening details about why and how they did what they did. With the darkness of tires still burning in Gaza. I needed to go and touch, remember these wounds of the Palestinian people who will never forget what happened to them there---how the women who were baking bread that morning were thrown into the ovens, how the men were paraded into Jerusalem to be ridiculed before being executed when they returned to the village, how those who evacuated were shot along that one road out, how bodies were burned in the village well, and finally how 53 orphan children were dumped outside the Old City walls. I went to stick my fingers in the still gaping wounds of both the Palestinian and Jewish memories.

I went because the Fabric of Our Lives Project features a woman’s story from Deir Yasin and we are busy now redesigning her dress to highlight that beautiful orange/gold couch stitching unique to Bethlehem and Jerusalem. I came to see where Zuhdiyah grew up on the west side of town, which allowed her and her family to escape the soldiers coming from the east. I came to get a felt sense of that tragedy because I am growing numb to the pile up of tragedies that come every morning on my Facebook page.

I went because I needed to know that there are, as Jewish theologian Marc Ellis says “Jews of Conscience,” who care about this past horror and believe, as I do, that the Right of Return is an inalienable right not just for Gazans marching at the border but for all refugees and that what happened at Deir Yasin was not just a massacre but a war crime, an atrocity and it is happening in slow motion now again each Friday at the border between Gaza and Israel when unarmed civilians---men, women, and children are shot by snipers.

So on this cool first Sunday in Eastertide, twenty or so of us gathered on a busy road in the Orthodox Jewish town of Gi’vat Sh’aul (formerly Deir Yasin) and made our pilgrimage to the site of the old village now forbidden entry because it is in a gated mental hospital. We walked past the old school and the bakery. At the bakery a Palestinian bus driver stopped his empty Egged bus and came to tell us that his family was from this village. Later near the hospital we heard from another Palestinian whose family, the Barakats, had come from the village.

There is tragic irony in building an institution for insanity on a depopulated village where a massacre took place. It also is an ingenious way to keep people out, to keep the secrets locked up. Nobody can enter unless you belong there.

The trip was organized by Zochrot, an Israeli organization, dedicated to educating Israelis about the history of how the state was founded and what happened to the Palestinian people as a result. The tour included the viewing of the new documentary Born in Deir Yasin by Neta Shoshani. The film tells the story of young man who was born in the asylum and is interspersed with interviews with the soldiers who were part of the para- military gangs and the Haganah who committed the murders. Their testimonies reminded me of listening to the guards at Abu Ghraib talk about torture. However these men, now in their 90s, close to their own deaths, and free of being held accountable, speak with an openness about the crimes they committed with an unsettling ease. Banality of evil sounds like this I thought.

The older Jewish woman sitting next to me during the viewing almost fainted as we listened in horror to one of the former soldiers stand at attention and sing his Nazi like song of nationalism and Jewish pride. Up to this point, I hadn’t realized I had come to touch her wounds of shame too. She sat next to me silently weeping except for a few gasps of air. What was she remembering? Her tears provoked mine.

I have no memories of this event so can only wonder what it must be like for Jews who have been raised on horrible stories of suffering to hear these stories where they are the perpetrators. My friend Ofer Neuman put it this way, “As a Jerusalmelite, as a Jewish citizen, and a descendant of Holocaust survivors, I see Deir Yassin as the ultimate failure of my society to learn from history. The immense suffering of Jews throughout history should have created a collective psychological impediment to mass killing and expulsion of Palestinians, rather than an excuse for these actions.”

In the dark of the screening room, I realized these Jews I had marched with were there not only to remember but also to hold onto their own humanity in light of those dark times and these new dark times.

On Holy Fire Saturday I went to Bethlehem to receive the blessing of the fire of the resurrection, on the first Sunday in Easter, I went and revisited what hell on earth can look like. My Easter light was challenged by this experience.

I believe, like many others, that reconciliation and peace starts with naming and recovering past wrongs. It begins in uncovering the dark blood splattered truth of what happened in 1948 and in particular on that fateful morning on April in a small village five kilometers outside of Jerusalem’s Old City when men, women, and children were murdered. As our guide said, it means when we stand at Yad Vashem, we must also look out over the ruins of Deir Yassin. We must reckon with both stories of human suffering.