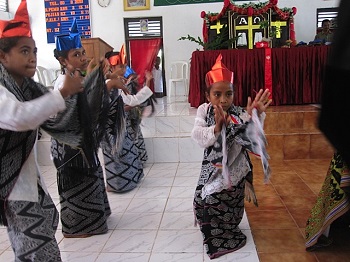 As I write to you, we are in between semesters at Artha Wacana Christian University, but unfortunately that doesn’t mean we have a break.  I still have 75 sermons to read from last semester in order to turn in my grades, and thesis supervision for those who are rushing to make deadlines for graduation later this month.  I am also acutely aware that this next semester will be my last before retirement.  The University has a mandatory retirement age of 65, and I will reach that golden age in June.  I will continue teaching in the graduate program for at least another year, because they still need my doctorate to help fulfill accreditation standards.  By that time we hope one or two faculty members currently doing doctoral study will return and I can well and truly retire.

Reading a stack of sermons and another, thicker stack of theses gives me a sense of how much has changed over the years.  When I first started teaching here 30 years ago (!) students were preoccupied with Christianity’s impact on traditional pre-Christian culture, how much of local culture could be “baptized” and therefore preserved, and how much needed to be 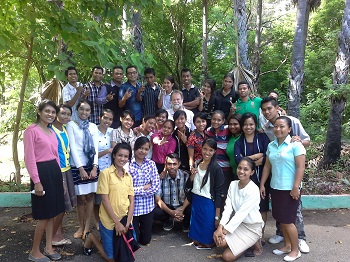 consigned to history.  If any social problems appeared in their written assignments, they tended to be limited to drunkenness, pregnancy out of wedlock, and how the church should “participate” in national development programs.  Any mention in class of the horrific killings of 1965 that brought Suharto to power, the invasion of East Timor, or the corruption of the Suharto regime would be met with fearful silence on the part of the students.  These were things one didn’t talk about in public.

Flash forward 30 years, and I am teaching the children of some of these same students.  And one thing stands out: they are not afraid.  If they still find it difficult to discuss Indonesia’s dark past, it is because they know little about it (but they are curious), not because they are fearful of government reprisals.  For the most part they are also less concerned about the traditions of the past than about contemporary social problems.  Their topics include child laborers in the Kupang market, the stigma faced by those who are HIV positive, human trafficking, the church’s attitude toward sex workers, domestic violence, and a gender analysis of suicide (Why are so many victims women?).  They are also less likely to view the church as a kind of moral police force and more likely to see it as a defender of the oppressed (although often with a shadow of the paternalism of previous generations).

These reflections were reinforced recently when I attended a pastors’ retreat on the neighboring island of Sumba.  The opening worship was accompanied by gongs, traditional dancing, and a shouted call-and-response between the women and the men that gave me goosebumps.  Twenty-five years ago gongs weren’t allowed at Christian wedding parties, much less in church.  Twenty-five years ago they ordained their first woman pastor; today the gender balance is 50-50.

I was there to give a talk about divorce (an added bonus for me was the chance to see former students I hadn’t seen in 20 years).  The pastors were debating whether the church should bless the marriages of people who had once been divorced.  My argument was that divorce is not a sin; it is a confession of sin.  It says, “We have squandered the blessing God gave us and we are powerless to make it right.” The forgiveness that the church offers must surely include another chance at life.  I don’t know how far my argument succeeded, but several pastors later made comments such as this one: “There’s a woman in my congregation who has been beaten by her drunken husband for years, and I always told her divorce was a sin. I felt bad about it, but didn’t know what else to say.  Now I’m going to tell her it’s okay to put an end to her suffering.”

That reminds me of another thing I’ve observed here over the years:  bad theology hurts people; good theology brings them joy and courage.  It’s as important to combat the first as it is to promote the second.  The somber season of Lent is a good opportunity to sort these things out.

My garden is inundated from repeated monsoon rains.  All that remains is some brave sorghum and lentils, and the indestructible basil and eggplant.  But our rice paddies are bursting with life.  As it is with agriculture, so it is with life.  Some things fade, some survive, some thrive, and we give thanks all the same.

God’s blessings to you this Easter.

John Campbell-­Nelson serves with the Evangelical Church of West Timor. He serves as a staff support for the Synod’s Theological Commission and Synod programs. His appointment is made possible by your gifts to Disciples' Mission Fund, Our Churches Wider Mission, and your special gifts.