Greetings from Bogotá. Writing this first newsletter of the year is a great chance for me to take stock of the past year and what I am looking forward to in the year to come. Let me start by thanking each of you for joining me in this journey and giving me support along the way.

2016 was quite a year. Paola and I enjoyed getting to see many of you and spend time with you from January to June as I did my second home assignment after completing my second four-year appointment to Colombia. We got to experience winter in New England, spring in Washington, D.C. and summer with my family in Tennessee. It was a fun time of sharing about the peace process in Colombia as the signing of the peace accord between the FARC rebels and the Colombian government drew near.

We returned to Colombia in July, I with a new appointment, this time to help start a new Peace Studies Center at the Baptist University and Seminary of Cali, a joint-venture between the university and three other faith-based non-profits. Though the Peace Studies Center has its academic base at the university in Cali, Paola and I will still continue to live in Bogotá and I will still be part of the team at Justapaz, the Colombian Mennonite Center for Justice, Peace and Nonviolent Action. 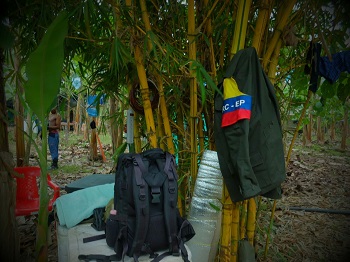 The last three months of 2016 were largely focused on coalition work with DiPaz, the Interchurch Dialog for Peace and its support of the peace accord. Highlights of this work included helping to facilitate workshops on the peace accord in the provinces of Chocó, Antioquia and Valle del Cauca. Despite our efforts to dispel false rumors about the accord, it narrowly failed to garner public support in a plebiscite on October 2nd. This set off a flurry of activity to salvage the peace deal. Thankfully a new accord was quickly negotiated that incorporated changes sought by those who had voted against it and Colombian congress overwhelmingly approved the new peace accord in November and set to work on the legislation needed to begin its implementation.

What a joy it is to share that January 2017 brought us the first images of FARC guerrillas making their way to the 26 different concentration zones where they will hand over their weapons to the United Nations and begin their transition to civilian life. The pictures included here were taken by the DiPaz staff that are monitoring the demobilization process. We are now seeing the fruit of so many years of dogged insistence that peace is possible in Colombia.

Unfortunately this has also brought on a reaction from those who have benefitted from war and who fear the changes that could take place as a result of the peace accord. This has led to an uptick in selective assassinations of community leaders and human rights defenders in the past several months. This is a stark reminder that the successful implementation of peace accords that leads to true and lasting changes is often as hard or harder than negotiating the peace deal. So we still have plenty of work to do. We still need your prayers and support!

As 2017 gets underway we will be working to shape the Peace Studies Center where we will research the impact of violence on churches and their role peacebuilding, training of religious peace workers and taking action for peace. I look forward to sharing these developments with you throughout the year. 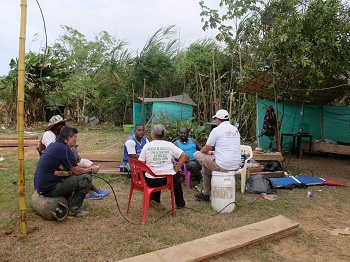 I am also looking forward to hosting a People to People Pilgrimage that will include Rev. Sharon Watkins (General Minister and President of the Christian Church (Disciples of Christ)), Rev. John Dorhauer (General Minister and President of the United Church of Christ), and Rev. Julia Brown-Karimu and Rev. Jim Moos (Co-Executives of Global Ministries) in May of this year. I also look forward to seeing some of you at General Synod and General Assembly which I will be attending this year, along with Jenny Neme, Executive Director of Justapaz.

As always, thank you for your prayers and support!

Michael Joseph serves with the Restoration, Life and Peace Commission of the Council of Evangelical Churches (CEDECOL) in Colombia, South America.