Hearts Ablaze with a Sense of Dignity and Purpose 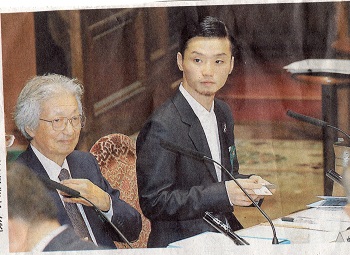 Now wait a minute! How can we let a political party, which only represents 20 percent of the Japanese population, forcefully pass such controversial laws that not only run against our own constitution, but against the overwhelming will of the people? What about democracy? What does it mean to be a constitutional democracy? These were the questions on the minds of the people who took to the streets this summer to protest the passing of the new set of security laws proposed by the Liberal Democratic Party (LDP). The largest protest was held in Tokyo on August 26th when 120,000 people gathered in front of the Diet building. Similar non-violent demonstrations were also held that day in 350 locations all over the country. The nation was afire with anger. And who do you think were standing at the forefront of this movement? It was the young people. Although the security laws (called “war laws” by the opposition because they allow for Japan to ignore six decades of constitutional debate around the peace constitution and to join in US military activities all over the world) were passed on September 19th, the movement has given many people reason to hope. As one of my colleagues put it, “Though democracy in post-war Japan has not taken root within the halls of the Diet, it is promising to know it has taken root in the hearts of the young people.” 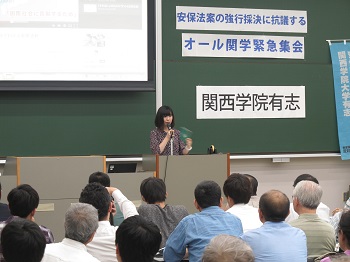 On October 2nd, a gathering was held on our Kwansei Gakuin campus in protest of the new security laws. There were 200 people packed into the classroom that evening. One of the speakers was T, a fourth year female student from our school. She was one of the participants in the student led movement called SEALDs (Students Emergency Action for a Liberal Democracy). She explained that SEALDs does not exist as an organization, nor does it have any representatives. Each young person is acting out of his or her own volition. Young people keep in touch by Facebook, text messaging and twitter. They intend to keep the fire of protest alive so that the LDP will lose its majority in the upcoming elections to be held next summer. I paraphrase her words as follows: “Maintaining peace by fortifying military might is old and outdated. I am tired of the way the United States does things, by going to war to maintain peace. I believe that true peace is built by the relationships of trust that we are able to maintain with our neighbors. The only way others will refrain from attacking us as a nation, is to do away with our arms, and to focus our efforts on humanitarian aid and disaster relief. Then our neighbors will say, “How can we attack them when they came to help us at a time of great need?” 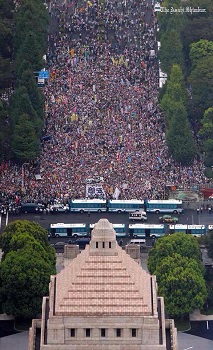 Aki is another college student from SEALDs who had the chance to address the Diet assembly the day before the passing of the fateful laws. He pleaded with the delegates saying; “I ask each of you to stand as one lonely individual. Before you think of factions, political loyalties and power politics, I want you to be your own lonely self as you ponder the choice before you.” Aki’s father is a pastor, a graduate of the university that I work for, Kwansei Gakuin.

This year marks the 70th year after the Second World War. The US and Japan have been close allies, and the relationship has brought Japan economic prosperity and stability. Japan has been ruled by a single party for most of this time, and the people have been able to hold their government accountable to the peace constitution which prohibits Japan from using military force to solve international conflicts. This delicate balance though was disrupted this year when the LDP decided to “interpret” the constitution for their own purposes. It didn’t help that Prime Minister Abe had already promised President Obama in April that he would deliver on these laws, even before he had opened the issue up for discussion within the walls of his own parliament. The public also learned most recently that the head of the National Self Defense Forces had met with the head of the US military in Washington DC last December with promises based on the passing of the new set of laws.

Now the people see that their own government does not intend to listen to them. In Okinawa people are angry. In Fukushima people are angry. In every rural area where there is talk of reactivating nuclear plants, people are angry; and now the anger has reached Tokyo and the major metropolitan centers of Japan. They feel unrepresented by their own government. They see that the government is more beholden to big brother across the sea than it is to its own people. They know that democracy is at stake, and that they need to persevere in the spirit of non-violence. 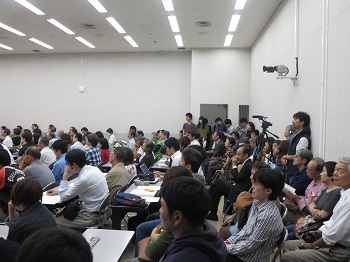 We are witnessing a new sense of dignity and purpose in the air. We do not know where this struggle will lead. I hope the people will be able to withstand the pressure to beat their plowshares into swords once again.