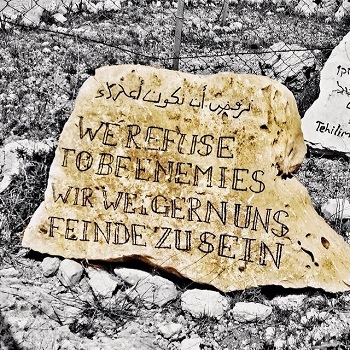 “When Jesus said love your enemies he probably meant don’t kill them.” So the bumper sticker says and our Gospel text from Matthew 5 too. Jesus is interpreting the law for a new group of exiles who are feeling more persecuted than blessed; he is giving them a set of instructions on how to be co-creators for God’s kin-dom.[1]

The whole Sermon on the Mount can be summed up as the following: share what you have with people in need; act toward each other the way God acts towards you; love your enemies; tell the truth; live generous lives. And oh, we are blessed not because we are good but because we are loved.

Others like Lindsey Paris-Lopez from the Raven Foundation see this last section of the Beatitudes as a set of instructions for how to deal with those who wield powers of coercion and domination. [2]

She calls this a theology of resistance for the building of the new community, God’s Beloved Community as Dr. Martin Luther King, Jr. called it.

But how do we do this in a world based on an eye for an eye and a tooth for a tooth, in a world blind with righteous anger and redemptive violence, in a world where profit equals power and enemies are to be made and crushed?

We do it by refusing to see the other as our enemy says Jesus. For as the former Bishop Desmond Tutu says, “When we see others as the enemy, we risk becoming what we hate. When we oppress others, we end up oppressing ourselves.” [3] Jesus rebukes Peter for trying to cut off the ear of the soldier, “Put down your sword. Enough.”  He who seeks vengeance will be forced to dig two graves, says an Old Native American adage, “One for the his enemy and the other for himself.” Or as Gandhi said, “An eye for an eye makes the whole world blind.”

Jesus calls everyone out of empire and occupation, by commanding us to love our enemies because God loves God’s enemies. But truth be told are we really able to do this? Aren’t we a bit more like Mark Twain when he said, “The rain is famous for falling on the just and the unjust alive, but if I had the management of such affairs, I would rain softly and sweetly on the just, but if I caught a sample of the unjust outdoors, I would drown him.” [4] Don’t we resonate with this sentiment? It’s the law of fairness, of balance, the law of retaliation that makes sure revenge is in keeping with the offense. But this is not how God loves.

Jesus’ law of love is not a commandment to become a doormat or a helpless victim however. To not resist with violence not only reaffirms our own humanity but also that of the one that is dehumanizing you.

So between violence and passivity is active nonviolence; what the late great theologian Walter Wink called Jesus’ Third Way.  For Wink and others, including myself, the reign of God, the peaceable kingdom, the Beloved Community, is an order in which inequity and violence are superseded by equality and nonviolence. Nonviolence, then, is not a means to the kin-dom of God but the way itself.

This is not new or exclusive to Christians. The Hebrew midwives and Pharaoh’s daughter were already practicing this when they refused to kill those babies, when they disobeyed Pharaoh.

The classical interpretation of Matthew 5:38-42 suggests only two possibilities for action in the face of evil or our enemy; fight or flight. Many have interpreted Jesus command to not resist evil as a command to become docile or compliant, to allow the oppressor to walk all over us. But the word anthistemi does not always mean lethal or armed resistance. Stasis, the noun form of the stenai means “a stand against.” Jesus is saying, “Don’t react violently against the one who is evil.” He then goes on to illustrate what active nonviolent resistance might look like through three examples.

It is important to remember who Jesus’ listeners were. They were not the ones that struck people or imposed forced labor or initated lawsuits; they were the victims. They were the ones who were dehumanized in a hierarchal system as the result of the imperial practices and policies.

The person who turns the other cheek is saying, “Try again.” I deny you the power to humiliate me. You cannot demean me. The abuser cannot backhand with his right hand; if he hits with his fist he makes the other his equal. Try again.

In second example, someone is being sued for his outer garment. Only the poor gave as collateral their garment for a loan. In a time when indebtedness was epidemic, not unlike today, Jesus is saying strip off all your clothing and march out of the court stark naked. The creditor will stand in shame with both your outer and inner garments in his hands. The debtor will rise above his shame and made a spectacle or protest against the system that enslaved him and created the debt. This unmasking as Wink calls it offers the creditor a chance to see himself and repent. Gandhi calls this showing the fangs of the oppressor.

Last year during the height of the violence in Jerusalem when almost all Palestinian men of a certain age were presumed to be terrorists and thus frisked daily, facebook Palestinian men circulated pictures of themselves in their underwear with their IDs tangling from their necks. This virtual protest was a darkly humorous way to say here I am with my precious ID for you to see.

The last example, go the second mile comes from the practice of forced labor that Roman soldiers could levy against their subjects. Jesus is counseling his listeners to walk the second mile to recover their dignity. By going the extra mile one is insulting the soldier’s strength, trying to get him disciplined for violating the rules of forced labor that only allow one mile.

Jesus is offering his listeners, the people at the bottom, under the boot of imperial forces and powers, a way to recover their dignity. He is offering them a way to liberate themselves from servile mentality and actions.

By refusing to play the opponents adversarial game by their rules Jesus is recommending a way of discipleship that does not only resist the aggressor but also the paradigm of hostility and contempt involved in striking a cheek, suing for a coat, or forcing someone to walk a mile in the first place.

“Do not resist an evildoer,” points to a deeper more radical resistance than violence can ever achieve. These were challenging words for the oppressed of his day and they are still challenging because it is easier to fight or flee; it is easier to demonize the other than to find compassion.

I would like to end with a few examples of how nonviolent resistance is playing out in our world today here and in my country.

Hind Khoury, former director of Kairos Palestine, reminds us that we Christians, we allies, have a right and a duty to act nonviolently through creative means, such as boycotts, divestments, and sanctions and other forms of pressure, to end the occupation of Gaza, East Jerusalem and the West Bank, now almost 50 years old. Khoury says, “We promote such action not as revenge for so much injustice but out of love to help regain the humanity of both the oppressors/occupiers and the oppressed so that all may live in peace.”[6]

My other two examples have to do with putting one’s body on the line. At Standing Rock in North Dakota last week army veterans returned to protect indigenous activists from attacks by militarized police. They came to put their bodies between the native elders and the privatized police force by forming a human shield. They held hands not weapons.[7]

In New York City last week 19 rabbis who are a part of T’ruah: The Rabbinic Call for Human Rights, committed civil disobedience by blocking traffic in front of Trump’s hotel in Manhattan. They put their bodies on the side of those who would welcome refugees from Syria’s brutal massacres. Rabbi Jeremy Kalmanofsky said, “Let us not descend into Trump’s version of race, prejudice, war hysteria and the failure of political leadership we were in the 1940s” when Jewish refugees were turned away from seeking refuge in Europe and the United States. [8]These rabbis got arrested for blocking traffic, for disturbing the peace, for showing compassion for the other whose humanity is bound up in theirs.

God loves God’s enemies. We are called to do the same by exposing the systems of injustice and oppression, by not cooperating, and by practicing God’s unconditional love. It’s that simple and that hard.

Loren McGrail serves with the YWCA Palestine assisting in communication and development. Her appointment is made possible by your gifts to Disciples Mission Fund, Our Church’s Wider Mission, and your special gifts.

[2] Lindsey Paris-Lopez, “The Sermon on the Mount: A Theology of Resistance”, The Raven Review, February 8 2017