Humanity is the Biggest Commerce From Guatemala to Mexico

I'm not from here, nor from there
I have no age, nor future
And being happy is the color of my identity
(Facundo Cabral)

“Now I know we are in Guatemala” was the first thing that I said to my colleague when we arrived at our destination. I said that because I heard the sounds of a Marimba band playing from afar, not because Tecum Uman looked anything like the Guatemala I know. As in many countries, different regions have different traditions and cultures, but the diversity was never as pronounced as it was in Tecum Uman, even after living seven years in Guatemala and travelling to most regions in the country. My colleagues who have lived all their lives in Guatemala experienced the same feelings. We travelled to Tecum Uman, in the State of San Marcos Guatemala, to attend the first “Bi-national Conference on Migration, Children and Border” from the Guatemala-Mexico perspective that took place on September 29th and 30th, 2014. 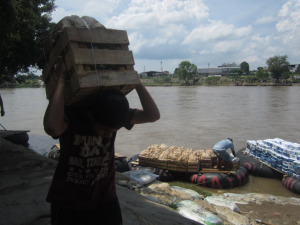 Organized and invoked by the Latin American Council of Churches (CLAI) and coordinated with religious and ecumenical organizations working in Mexico and Central America, the conference was a response to the critical situation of Central American children, women and men who leave their countries in search of peace, a safe place to live and, for many, lost family members.

Cardinal Joseph Cardijn’s “See, Judge, Act” methodology and Liberation Theology tool was the essence of a walking tour of Tecum Uman and the Migrant House and a walk to the Suchiate River to witness everyday life in border regions. In the Guatemala-Mexico border region, the biggest source of commerce from Mexico to Guatemala is the significant transport of Mexican contraband that takes place across the River Suchiate. However, one could say that the biggest commerce from Guatemala to Mexico is humanity, as evidenced by the tense feeling of despair and distress that filled the air from the hardship experienced by transient migrants and by the many families who live from the contraband economy. For example, my whole understanding and perspective of backpacking has changed after visiting Tecum Uman. By standing or sitting in the central plaza for a couple of minutes, one starts to see the different backpackers walking or sitting around and the majority are between 12 to 25 years of age. 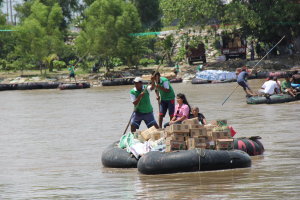 The visit to the Migrant House in Tecum Uman, where hundreds of Central Americans seek a place to rest their feet, their hearts and their uncertainty, allows visitors to have an empathetic and educational experience about the reality of migrant women, children, and men. In the United States context, this testimony reminds me of the prejudice towards contemporary immigrants, many from Central America, which has created imaginary borders over time. This repression is realized now as physical barricades at the US-Mexico border. This testimony also reminds me of a scripture passage from Luke 6: 41-42, which reminds us about judging and witnessing “without that plank that blinds our eyes before we attempt to remove the speck of sawdust from our own brothers and sisters.” As a wider U.S. community, we need to embrace our own truths and the geopolitics of imaginary borders, which isolate us politically, physically, economically and, perhaps more importantly, compassionately. The roots of the problem, according to Fr. Juan Luis Carbajal “are the different manifestations of migration such as forced migrations” which are expressions of violence. After working for more than two decades with Proyecto Vida, a faith-based youth organization responding to HIV in Southwestern Guatemala, Irish Catholic Sr. Dee vehemently responded to “the difference and significance between today’s migration, no longer in pursuit of the ‘American Dream’ but as a way to escape the national nightmare called violence in Central America”.

One of the challenges addressed at the Conference was that in the national Guatemalan sphere, for example, churches have not demonstrated a unified solidarity nor have they pronounced themselves institutionally related to immigration. In fact, some of the challenges stem from denominational issues having to do with the division and isolation between ministries within the Catholic Church, shared Sr. Dee.  But this is not only a problem within the Catholic Church because it is also relevant with Protestant denominations.

An outcome of the Binational Conference was a public declaration on behalf of Latin America calling for a more dignified response to the current crisis affecting Central American nationals who are escaping the great level of violence in their countries. Another outcome was the consolidation of ecumenical efforts at the national and regional levels in Central America. Thanks to the coordinating efforts by the Latin American Council of Churches (CLAI), The Mesoamerican Christian Community (CCM in Spanish), and the Christian Ecumenical Council of Guatemala, the Conference was also made possible by the United Nations Population Fund. This alliance building effort has also opened opportunities for working for and strengthening sustainable dignity efforts in Central America.

Gloria serves with the Ecumenical Christian Council of Guatemala (CECG). Her appointment is made possible by your gifts to Disciples Mission Fund, Our Churches Wider Mission, and your special gifts.