By Scott Nicholson on 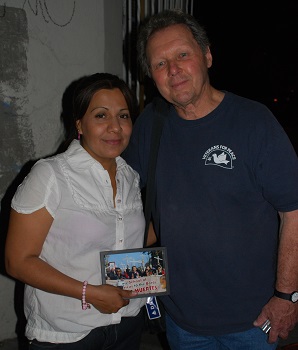 The movement to close the School of the Americas (SOA) training center for Latin American soldiers has held an annual vigil in front of the gates of Fort Benning, Georgia for 25 years.  This year, the vigil will be moved here to the divided border city of Nogales as an expression of resistance to the militarization of the U.S.-Mexico border.  The four-day event will conclude on October 10 – the fourth anniversary of the murder of 16-year-old José Antonio Elena Rodriguez by a U.S. Border Patrol agent that fired into Nogales, Sonora from Nogales, Arizona on October 10, 2012.

The Hogar de Esperanza y Paz (Home of Hope and Peace - HEPAC) hosted a delegation led by Father Roy Bourgeois, founder of SOA Watch, in May 2013.  A vigil was held that evening at the site where José Antonio was killed.  Father Roy presented José Antonio’s mother, Aracely, with a photo of him holding a cross with her son’s name during the vigil at Fort Benning the previous November.

The journey of SOA Watch from its beginning in front of Fort Benning to the border here in Nogales parallels my own life journey over those same 26 years.  My first trip to Latin America was to the Mesa Grande refugee camp in Honduras in September 1989.  The camp was home to thousands of people who had fled from the U.S.-sponsored war and repression in El Salvador.

A group of 500 people were preparing to return to El Salvador the following month and we met with their “mesa directiva” (elected leaders).  Beto, Arturo, Isabel, Neto, Eulalio and Miguel shared their stories with us and transformed my life.  “We are willing to risk our lives, if need be, to bring our people back to El Salvador,” said Beto, the president.  “By claiming our right to live as a civilian community in the countryside we believe we will be contributing to the process of bringing peace to our homeland.”

They returned to Guancorita in El Salvador on October 29, 1989 and found that most of the community had been destroyed by Air Force bombing.  Less than three weeks later, on November 16, soldiers went into the Central America University in San Salvador and murdered Father Ignacio Ellacuría (rector), five other Jesuit priests, their housekeeper and her daughter.  Many of the soldiers had been trained at the School of the Americas.

Three months later; on February 11, 1990; Guancorita was attacked by the Air Force.  Planes and helicopters flew overhead for two hours and fired 15 rockets and 8 bombs around the community.  Four families that were living under sheets of plastic ran to seek shelter in a house made out of brick.  One of the helicopters fired a rocket that exploded inside the house – killing five people, including four children, and wounding 16.

We visited the community the following month and Patrocinio led us to “la casa de la masacre” (the house of the massacre).  We enter the house and there is a huge stain spread across the right wall.  The bricks are pockmarked with holes from the “esquirlas” (rocket shrapnel).  Five crosses with the names of the victims mark the sites where they died: “Isabel Lopez” and “Anabel Beatriz Lopez” (Patrocinio’s 10-year-old and 2-year-old daughters), “Jose Guardado” and “Blanca Lilia Guardado” (father and 2-year-old daughter), and “Dolores Serrano” (10-years-old).

Patrocinio tells us what happened that morning and then takes out his bandana and carefully unrolls it on the ground.  Inside is a piece of the rocket, with the markings in English.  The rockets, the bombs, the helicopters and planes had been paid for with our tax dollars.

We met Patrocinio’s spouse, Maria, that afternoon in the neighboring community of Guarjila.  Tears stream down her face as she tells us about her two daughters.  She is eight-months pregnant and shows us the shrapnel wounds on her chest and upper legs.  “It was a miracle I didn’t lose my baby,” she says.  Maria gave birth to a girl who was named Isabel Beatriz in honor of her two sisters that she never met.

In July 1990, Guancorita was renamed Comunidad Ignacio Ellacuría in honor of the rector of the Central America University and in recognition that both the Jesuit community and Guancorita had suffered massacres.  In November of that year, Father Roy and a few other people held a vigil at the gates of Ft. Benning to commemorate the first anniversary of the massacre at the university.  The vigil would grow over the years with the participation of thousands of people every November.

Twenty two years after that first vigil, a Border Patrol agent fires his pistol between the bars of the Nogales border wall at José Antonio who is walking down below on International Street in Nogales, Sonora.  Lonnie Swartz empties the 13-round clip, puts in another clip, and then fires all the bullets in that one too.  He shoots José Antonio once in the head and seven times in the back.

I visited that site on the sidewalk in front of Dr. Contreras’ clinic ten days later with Jeannette, the director of HEPAC.  The wall on the corner had seven bullet holes, up high, with red circles around each one that had been drawn by police investigators.  A few feet away, the side wall had three bullet holes, down low, at the site where José Antonio died.

On November 2, Day of the Dead, HEPAC helped organize the first procession and vigil to protest the murder of José Antonio.  Other vigils followed to commemorate the six month, one year, year and a half, two year, and three year anniversaries.

We will gather together this October in solidarity with the family of José Antonio and all victims of U.S.-sponsored violence; including Isabel and Anabel Beatriz Lopez, Jose and Blanca Lilia Guardado, and Dolores Serrano.  We will also raise our voices to say “Ya, Basta!” (“Enough!”) to the culture of war and the culture of silence that allows the violence to continue.

Scott Nicholson, a member of University Congregational UCC, in Missoula, Montana, serves as a volunteer with the Hogar de Esperanza y Paz (Home of Hope and Peace) community center in Nogales, Mexico. His appointment is made possible by your gifts to Disciples Mission Fund, Our Churches Wider Mission, and your special gifts.