In the Midst of a Drought.

“The ground is cracked because there is no rain in the land; the farmers are dismayed and cover their heads.”
(Jeremiah 14:4)

These words from Jeremiah reflect the current situation here in Lesotho.   The drought afflicting much of Southern Africa has an unyielding grip on Lesotho.  It is mid-summer here, and while the trees and shrubs are green, the rest of the landscape is mostly barren and

brown.  Late rains or several weeks in summer without rain are not unusual occurrences here but what is happening this season appears to be unprecedented, at least in recent memory.  No one seems to remember anything like it.  During September and October I did not keep track of the rainfall, but I’m sure we did not have more than a couple of days of rain, if that.  In November, in Morija where I live, we had a half-day of rain.  In December we had twenty minutes!  The New Year has so far been dry, too.  Without a doubt it has been the driest summer in memory. 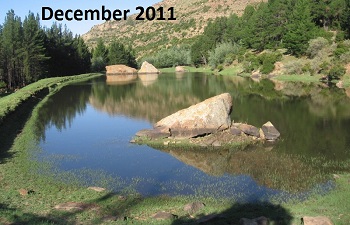 Along with the drought there have been many windy days with blowing dust that turns the horizon into a bleak brown haze.  Temperatures have been in the 90’s instead of the 80’s.  Many springs and dams have dried up.  Rivers have stopped flowing.  The weather forecasters said months ago that the current El Nino would bring us a dry summer, but no one expected it to be as bad as this.  Current predictions are that rain will only come in March, which is normally the end of the rainy season and far, far too late to help farmers this season.

Water shortages, needless to say, are common.  The vast majority of Lesotho’s population does not have piped water in their homes.  People depend on community taps or natural springs to source their daily water needs.  Next door to me is the Morija Theological 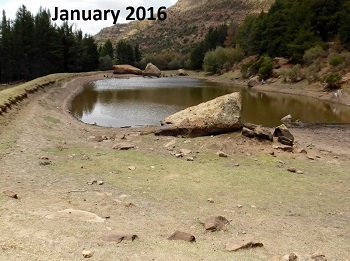 Seminary where pastors and evangelists are trained for our partner church the Lesotho Evangelical Church in Southern Africa (LECSA).  The seminary depends, like many people and LECSA institutions in Morija, on piped water from springs on the Makhoarane Plateau.  But the springs have dried up and water shortages have disrupted classes.

One of the largest rivers in Southern Africa is the Senqu (also called the Orange).  Its source is in the northeastern mountains of Lesotho and then meanders west all the way to the Atlantic Ocean.  Even this river is a mere shadow of itself and can be crossed on foot in some places instead of by ferry boat which is unheard of for this late in the summer.

In the early morning when I drive to work in Maseru, I pass community water points where women and girls are usually gathered with dozens and dozens of large plastic containers waiting to be filled.  Lately, on some days I find no one and realize that there is no water flowing that day.

Lesotho’s Prime Minister, Mr. Pakalitha Mosisili, has declared a state of drought emergency and is appealing to donors for assistance.  Given that a quarter of the population regularly receives, or is in need of, food aid, the effects of the drought could easily double that figure. 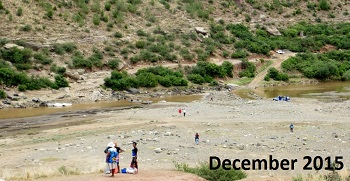 Heat and drought are images that come to my mind when thinking about the story of Jesus being tempted in the wilderness, a story often associated with Lent which starts in February.  This season of the church is traditionally viewed as a time of personal spiritual reflection often accompanied by soul-searching and, hopefully, a sense of renewal as time in spiritual disciplines such as prayer, fasting and reading of Scripture draw us closer to God.  Questions may abound:  “What is God saying to me in my present situation?” “Why have prayers for rain gone unanswered?”  “Should I act in faith (plant, believing that rain will come) or listen to reason (the weather forecaster)?”  Like David in Psalm 63:1, we may want to cry out,  “O God, you are my God, earnestly I seek you; my soul thirsts for you, my body longs for you, in a dry and weary land where there is no water.”  We long for the certainty of God’s presence and love.  While we cannot always rely on the weather or our personal feelings to know God’s will, we can count on God’s promise to be with us in all situations.  Jesus, the promised Immanuel, is “God with us”.  In the midst of our droughts, literal or spiritual, in season and out, let us remember that God really is with us!