By Global Ministries (Disciples of Christ and United Church of Christ) on September 09, 2020 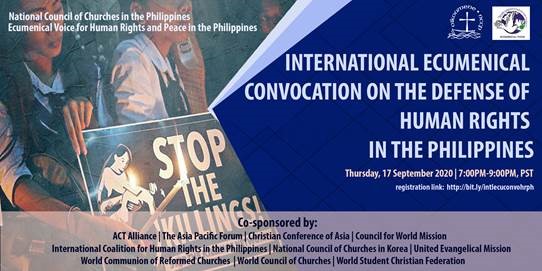 While Philippines is bearing the brunt of the COVID-19 pandemic, the human rights situation in the country has been exponentially worsening. In July 2020 the Philippines government enacted the Anti-Terrorism Act of 2020, which legitimizes unlawful arrests and detention, undermines the due process of law, and runs contrary to Philippine Constitution. Critics say the legislation undermines the Philippine Constitution’s bill of rights guaranteeing to every Filipino basic and fundamental rights and liberties.

In critical times such as these, the NCCP, in cooperation with EcuVoice and international partners, convened the consultation to call on the accompaniment and solidarity of the wider international ecumenical community for the protection and promotion of human rights in the Philippines. Partner organizations and churches are invited into a space of deep reflection and concrete action through an online International Ecumenical Convocation on the Defense of Human Rights in the Philippines.

World church leaders denounce rights violations in the Philippines, echo the call to “Stop the Killings”

Adapted from NATIONAL COUNCIL OF CHURCHES IN THE PHILIPPINES

"It is in the time of crisis that we come together as a people of God and stand in solidarity with one other. The call to end human rights violations is an act of allegiance and faithfulness to God and a call to say no to systemic injustice," said Rev. Dr. Collin Cowan, General Secretary of the Church World Mission in the International Ecumenical Convocation on the Defense of Human Rights in the Philippines on September 17.

World church leaders in the Convocation denounced the worsening rights situation in the Philippines and raised alarm on the violations experienced by rights defenders and organizations. “In the context of COVID-19 pandemic, human rights have been greatly exacerbated and worsened, in which context civil society space has even more drastically reduced,” said Peter Prove, Director of the World Council of Churches (WCC) Commission for International Affairs.

The WCC is one of the partner organizations of the National Council of Churches in the Philippines (NCCP) that are closely monitoring the Philippines at the UN Human Rights Council (UNHRC), and has been advocating in behalf of the rights defenders here in the Philippines to the UN Special Mechanisms for many years. As part of its ongoing commitment, it continues to push and advocate for the members of the 45th UNHRC to vote for an independent and impartial investigation on the killings and Human Rights Violations under President Duterte as reflected on the report of the Office of the High Commissioner for Human Rights last June.

Derek Duncan, co-chair of the Asia Pacific Forum[1]said that “US churches, in particular, are painfully aware of the troubled colonial history between the US and Philippines, which contributes to our nation’s complicity in today’s human rights abuses by both government and industrial-commercial structures in the Philippines”. However, he emphasized that their continued advocacy with the US government remains of critical importance and their current advocacy “focuses on introduction of a robust Philippine Human Rights Act, an instrument which would ‘suspend United States security assistance to the Philippines until such time as human rights violations by Philippine security forces cease and the responsible state forces are held accountable’.”

The World Student Christian Federation (WSCF) also expressed concern “over the rights violations of human rights defenders, particularly the red-tagging of NCCP and the Student Christian Movement in the Philippines. The government’s militarist policies have been an excuse to persecute, to kill and to shrink the space for civil society,” remarked Marcelo Leites, Regional Representative of WSCF-Latin America and the Caribbean.

Christian Conference of Asia General Secretary Dr. Mathews George Chunakara also condemned the “[Philippine] government’s act to stifle the voices and conscience of the people” and called to repeal the Anti-Terrorism Act of 2020. “The subversion of democratic rights during the martial law is back to be seen. There are many indications that the current President is going to the same direction as Marcos during the martial law era.”

Rev. Dr. Chris Ferguson, General Secretary of World Communion of Reformed Churches, responded “If we were to keep silent, even the stones will cry out. We pledge to mobilize our own people, raise the issue to the international forums, bring together our families to advocate and work and be part of the global struggle against authoritarianism.”

These were in response to the testimonies from church workers and human rights advocates who have been red-tagged, vilified, harassed, and charged with trumped-up cases. Among those who gave their testimonies were Sr. Ellen Belardo from the Rural Missionaries of the Philippines, United Church of Christ in the Philippines, Bishop Hamuel Tequis, Rev. Marco Sulayao of the Iglesia Filipina Independiente, Jane Molina Lee, widow of a drug war victim, and Clarizza Singson of Karapatan-Negros. Cristina Palabay of Karapatan gave the Philippine Human Rights situationer and Atty. Ephraim Cortez of the National Union of Peoples’ Lawyers discussed the Anti-Terrorism Act and its impacts on the work of churches and humanitarian organizations.

Filipino church leader, Bishop Reuel Norman Marigza, General Secretary of the National Council of Churches in the Philippines, called on the international community for a continuous accompaniment and greater solidarity with the Philippines. “With you by our side in solidarity, accompanying us in our quest for justice, we may be afflicted and persecuted, vilified and harassed, charged falsely or imprisoned under made-up charges, yet we are not forsaken.”

Before him, The Most Rev. Gerardo Alminaza, Bishop of the Diocese of San Carlos, gave one of the welcome remarks, said that the cries for justice and solidarity ring out and reverberate through the villages in the island of Negros which “shake the Church and quicken the hearts of her people”. Ms. Ma. Cathrine Kay Almario, NCCP Vice Chairperson for the Youth also welcomed the participants who stated that the current administration must be held accountable for its crime against humanity.

The Convocation ended with the launch of a unity statement read by Rosmalia Barus, the Vice Moderator of the United Evangelical Mission, The Most Rev. Rex RB. Reyes, Jr. of the Episcopal Diocese of Central Philippines, Episcopal Church of the Philippines, and WCC Central Committee member, with Ms. Patricia Mari Mungcal of the NCCP. The said statement carries the message that the international ecumenical community will bear witness and keep watch with regards to the human rights situation in the Philippines. The statement also supports the recommendations of the United Nations High Commissioner for Human Rights, including recommendations from at least 24 UN human rights experts for the UN Human Rights Council to “establish an on-the-ground independent, impartial investigation into human rights violations in the Philippines”. The signature campaign, initially signed by 20 international church institutions, will continue until September 24 while the 45th UNHRC Regular Session in Geneva is still on-going.