Read the most recent update

Jackson Clair (Jack) Norment was born in 1928, the second son of Disciples of Christ missionaries to Paraguay, Malcolm L. Norment and Arabella Marvin Norment. Jack first traveled to Paraguay with his family in 1931. They returned to the United States in 1935 when his mother was critically ill. She died in April 1937. Malcolm Norment and his two sons, Malcolm, Jr. and Jack, returned again to Paraguay in 1938, one year after the passing of his wife and their mother.

In October 1942, Jack was at school in Buenos Aires when he became ill with scarlet fever. He died four days later, seven years after the death of his mother. In 1948, six years after the passing of Jack, the Disciples of Christ Church in Paraguay established a camp and named it Jack Norment in remembrance of Jack and the many contributions his family made to the church.

During the summer, camps are held for children, youth, young adults, and families. Several times each year groups of working and street children who have a relationship with the Disciple ministry, Friendship Mission, attend Camp Jack Norment outside of the city for weekends of fun, fellowship, and formation.  Camp Jack Norment also serves as a host and a resource for multiple people and organizations such as the Peace Corps, universities, and churches.

Sixty years after Jack Norment Camp was established, it continues to meet the needs of the people of Paraguay and nearby countries.  The camp currently serves over 17,000 people per year, averaging about 50 people every single day, who benefit from the camp’s life-changing programs.  The camp offers a variety of camps, many of which pay particular attention to the environment. In addition, new programs are providing development opportunities for the region. The camp is thriving under the leadership of the current directors, both from the Disciples of Christ Church in Paraguay.

In 2006, Jack Norment Camp established an educational farm. In addition to educating on best farming practices, the farm has goats that provide milk and meat for the camp, the Saturday Kids' project, and for sale when available. The income generated by the farm helps with the administration of the farm and camp.  Forward thinking and strategic planning have resulted in the barn being expanded to prepare for future farm growth; thereby increasing the camp’s ability to sustain itself in the future.

Groups from around the region use the facilities at the camp for meetings, retreats, and training events. Groups include Disciples, ecumenical, and outside groups who rent the facilities. On Saturdays, the camp serves as the location for an ecological club which gathers kids, age’s seven to twelve from the local community and emphasizes sustainable farming and developing future environmentalists to preserve the earth’s natural resources.  Lastly, a new Disciple congregation has begun meeting at the camp on Sundays for Sunday School and worship services. The Sunday gatherings are very ecumenical, as is the vision of the whole Disciples church in Paraguay.

In the past year, the camp has made many improvements to existing structures.  Despite the progress, there are yet plans for even more work to be completed, as the needs are many and the needs are great. Physical improvements include upgrading the water system, additional cabin remodeling, building a multi-purpose room that will be available for the community, replacing a roof, and building a restroom for one of the cabins. Other strategic social and communal goals include continuing to help strengthen the local church and providing social security benefits for the staff. 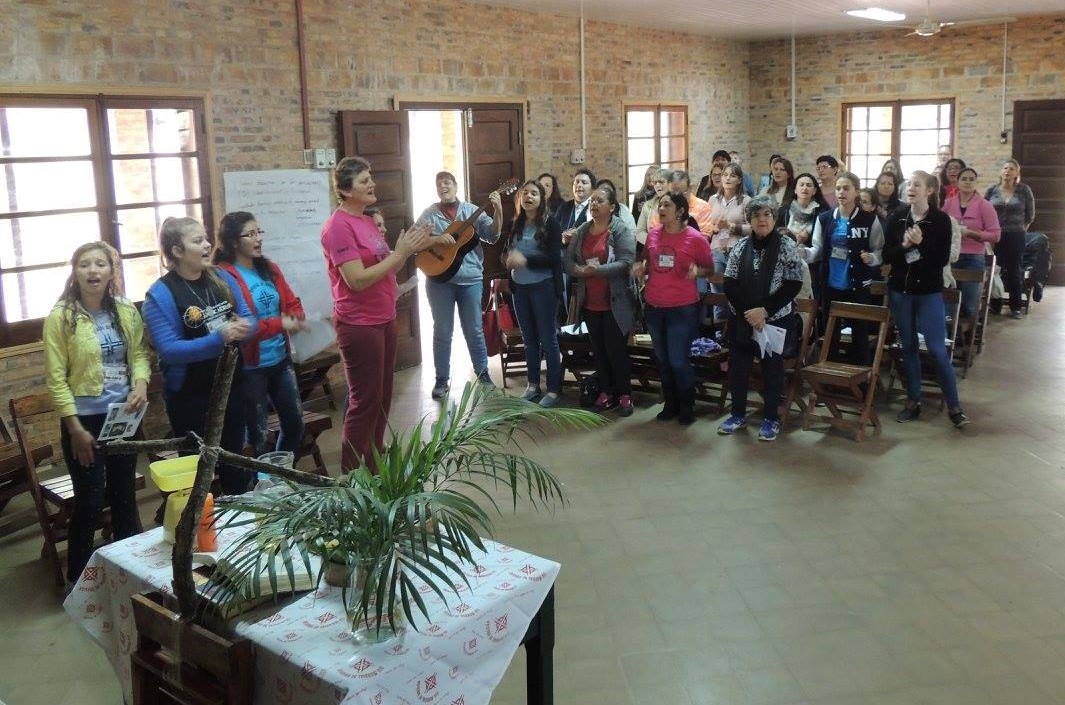 The Jack Norment Camp continues to be a special place where people are able to live in community with each other and with creation. With two areas – Mission Camp and Emaus Camp – Jack Norment can currently host up to 185 people. Facilities at the camp are varied and provide many engaging opportunities for campers including an environmental education center, pool, low ropes course, dining hall, playground, and more.

In August, the Jack Norment Camp hosted a retreat for the annual World Day of Prayer. An ecumenical group of women from all over Paraguay and neighboring countries gathered together to pray and sing and worship together. In 2016, their prayer focus was around Cuba. The same group is beginning to plan and organize next year’s retreat, which will focus on the Philippines.

In early November 2016, the Jack Norment Camp was hit with terrible wind storms that also affected many parts of Paraguay. Campers were mobilized quickly to help clean up debris, replace trees.  Replacing the trees that were damaged by the wind storms is one ways the camp is implementing their new reforestation plan that invites campers to participate in planting and caring for new trees.

In recent years, Jack Norment Camp has been in the process of remodeling significant portions of the camp. It is necessary for the camp to remodel and refurbish the camp’s facilities from time to time in order to keep up with routine maintenance as well as improve the facilities for guests and enable the camp to continue to carry out its mission.

Also, the leadership has made it a priority to carry out these renovations at Jack Norment Camp without taking on significant debt and without many closures of the camp. The camp accomplished this by doing renovations incrementally over time and by using camp staff and volunteers to do much of the work.

During these renovations six cabins, the pool, and the main meeting area were renovated, and a shelter area was built as well.

During the COVID-19 pandemic the Jack Norment Camp has had to cease operations and continues to compensate its staff. It hopes to eventually begin offering services again soon with new safety protocols and measures in place.