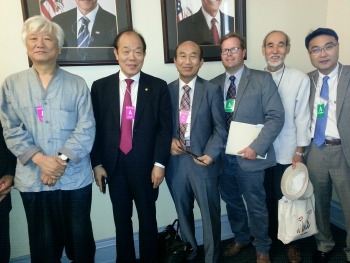 The National Council of Churches in Korea has appealed to international partners to join them in prayer and solidarity for peace during this Lenten season.

NCCK sent a letter asking international partners for solidarity in appealing to the US and South Korean governments to work for peace and reconciliation. The appeal letter and advocacy letters they sent to President Obama and President Park Geun-hye of South Korea are below.

They also shared the following prayer for churches to use on Ash Wednesday:

On this Ash Wednesday, as we consider the ashes of repentance, the National Council of Churches in Korea asks you to join your prayers to theirs for reconciliation between North and South Korea.

People still, after all these many years, live with the pain of separation. Our government will not allow us to send rice and flour to our starving northern brothers and sisters.

Lord, forgive the barriers we have erected against each other and give us the will and show us the way to peace. We pray for those who suffer, and ask for them comfort and relief. Let the ashes of death and fear nourish a glad rebirth.

In Jesus' name we pray ~Jesus who set his face steadfastly toward Jerusalem where he would walk through death to reconcile us to each other and to God.

Letter from NCCK to partner churches

Dear partners in the just work of Christ,

Warm greetings from NCCK in Seoul.  We wish health and peace in all your lives.

Presently, there are so many issues of concern in the world.  We grieve over war in Syria and Iraq and Ukraine, about governments rushing to pass laws about terrorism and committing ever greater funds to militarism, about racism in our societies, about poverty increasing.  Daily we have so many things to pray about, for repentance and new paths to walk.

Brothers and sisters, the NCCK would like to lay before you two issues of present concern for your support and comfort.

We have recently sent a letter to our President Park Geun Hye, asking that she lift the sanctions against North Korea (called the May 24 Measures) which prevent humanitarian aid from going into North Korea to bring relief to the many there who are hungry and sick.  Each year between Christmas and the Lunar New Year celebration the NCCK collects money for food aid to assist our North Korean brothers and sisters who are in distress. The last few years we have had to send shipments of flour from China, through the partnership of Amity Foundation, but this year we long to send it directly.  The governments of North and South Korea have made comments about working toward some understandings, but to our discouragement, nothing has come of it yet.

Therefore this letter is to urge President Park to at least open the border to humanitarian aid and to allow family reunions to take place.

We sent another letter yesterday to President Obama of the United States.  We ask him to give up his isolationist policy toward North Korea, and instead focus on a policy of engagement, as the US has just done with Cuba.

Attached you will find both of these letters.

We would like to ask you, our partners and friends, for your churches to send letters with similar concerns to the White House or the American Ambassador in your country for the engagement policy to North Korea, and write or visit the Korean Embassy in your country for lifting the 5.24 Sanctions.

We also ask that you ask your churches to use the prayer we have included for their Ash Wednesday services.  We value so much the prayers of the global Christian family. We have included a story of a divided family which might be shared as well to help with understanding some of our situation.

And lastly, we invite those of you who would like to share in our fund raising for aid to North Korea.  We will continue our collection through the Lenten period, hoping for the border to open to aid.  If you wish to be part of this [please contact the Global Ministries to make a donation.]

The deepest thanks of the NCCK goes with this letter, for we know of the care of our beloved partners.

NCCK Letter to US President Obama