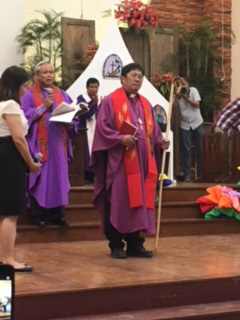 The NCCK will hold a candlelight prayer meeting on 7 June at Gwanghwamun Square in Seoul, in front of the US embassy, and is expecting some 300 people to join. The square is also the same location as the Candlelight Revolution in which more than 17 million people gathered to demand the resignation of President Park Geun-hye and full democracy in 2016-17.

The NCCK is also calling upon its member churches and partners to organize prayer gatherings on the same day, or sometime before the summit. The NCCK has suggested that Korean Christians offer a minute’s prayer each day from 6-12 June.

Prayer cards will be distributed with a flag on the cover that symbolizes a unified Korea that was used in the Pyungchang Olympic games. People will pray for the end of the Korean war, the realization of a peace treaty, denuclearization on the Korean peninsula as well as in the world, and a lifting of the sanctions against the Democratic People’s Republic of Korea, along with humanitarian cooperation to meet urgent needs.

In support of the NCCK and lasting peace on the Korean Peninsula, the National Council of the Churches of Christ in the USA, as well as the World Council of Churches (WCC), invites Christians and people of good will across the world to join in these prayers.The WCC will hold a candlelight prayer service at noon on 7 June at the Ecumenical Centre chapel to express solidarity with its sisters and brothers in Korea.