Lead Us into Understanding 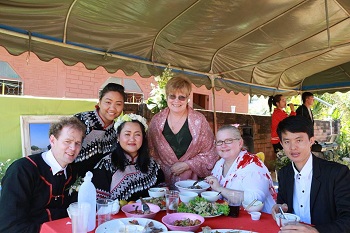 A good chunk of my work as an Ecumenical Officer involves translating—translating of conversations, of documents, of sermons, and so on.

This is a crucial service, in a country that ranks 62nd among the 70 countries in the world where English proficiency exams are most often taken. Thailand is extremely fortunate in that it has never been colonized by a Western power, unlike all of its neighbors in ASEAN (the Association of Southeast Asian Nations). But this may also account for the comparatively low use of English. Why is this important? Because English is the official language of ASEAN, as well as APEC (Asia Pacific Economic Cooperation).

The need to use English has become even more important in 2016, as ASEAN has begun to function as an economic community, a little bit like the Euro Zone.

Yes, I could speak Thai before I was invited to do Mission Work with the Church of Christ in Thailand. But my reading and writing skills were quite slim, since all of my childhood schooling, except for 3 months, was done in the English Language. For that reason, this past year has involved a good deal of Thai language study.

One thing linguists enjoy doing is translating something from one language to another and back again. I remember, years ago, reading a translation of Matthew 26:41b (“The spirit is willing, but the flesh is weak”), from Russian into English. It read as follows: “The wine is good, but the meat is spoiled.” So I’m offering the Lord’s Prayer, as found in Matthew 6:9-13. I had never learned it in Thai as a child, even though I attended and even played the piano for, many a worship service in Thai. But my current Thai teachers have asked me to memorize it.

Here’s what it sounds like to me, translated literally into English (and I admit up front that I will likely get disagreement from every Thai speaker, native or foreign, who reads my version, so please, go easy on the letters of complaint):

9O Holy Father of all of our humble selves, who abides in heaven, [we] ask that your holy name be respected and worshiped.

11Give daily food in your holy way to the people of our humble selves on this day.

It may sound quite odd, or even funny. And I’ll admit it’s fun, for me, anyway. But the truth is, any time I can learn something of someone else’s language, I believe it helps me to understand my own language, and my own thinking, with more depth.

This can hold true for you, too—because all of us do more translating than we might realize. Every conversation finds us talking to someone whose understanding and ways of seeing the world is probably a little different from ours. Anyone who has occasional misunderstandings with friends or family can see that. (After eight years of living in Iowa, I’m still not sure I can speak “Iowan” that well. I think my “Michigan” and “Kentucky” are both a little stronger than my “Iowan.”)

Recently I was privileged to be the pianist in a wedding that was held in a mountaintop village in the far north of Thailand. The bride is a member of a mountain tribal group, the Lahu, and the groom is an Afrikaner, now living and working in the Netherlands. The wedding was held in three languages: Lahu, Thai, and English (since only one person there spoke Afrikaans, and only the bride and groom spoke Dutch). What a joy! The presiding minister spoke all three languages, not requiring another person to translate. Six choirs or duos sang, in Lahu or Thai, and the music I had been asked to play was from the hymnal—all tunes from the Western part of the world (you would have known them). You might call it a different kind of reminder of the Day of Pentecost. The Spirit was clearly present.