Learning about Indigenous Rights in Mexico

I recently interviewed my friend and colleague Elena Gomez Martinez, a 29 year old Maya indigenous woman from the San Gregorio de las Casas/Huixtan, Tsotsil and Tseltal, region of Chiapas, Mexico. I wanted to learn more about her community, family dynamics, the rights of the people, and the discrimination that her ancestors experienced. 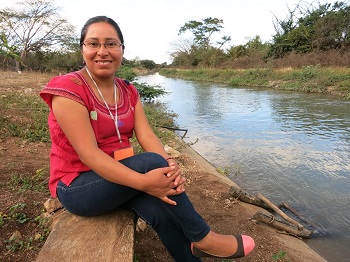 In your community, who has more rights?

What I have noticed in my community, and in the neighboring communities, is that the men are the ones that have more rights to have their voices heard in an assembly of the community. There is participation of women, but only when the husband is trying to find work.  Yet even then they have very little say in these meetings.

Who is in charge of the family dynamic?

I think both are responsible for distributing family activities as the father works mostly with the sons and the mother with the daughters.  However, this does not always happen because many young women are also involved in field work.

Economically speaking, it is the father who decides how money is managed and spent. We must also take into account that in recent years, through the awareness of gender, culture and law concerning the dignity of men and women, the situation is changing. Now it is more equitable for the man and woman as parents to have the same rights and obligations in seeking to care for their home. For example cooking, cleaning the house, washing clothes, bringing firewood, cleaning or grooming the children, etc.

What rights do the women have in the home and in the community?

Is the family / indigenous community increasing, decreasing or remaining the same?

Each culture is different, even if different communities live in the same municipality. In the case of my community, previously one could be married very young at the age of 14 years-old. Now this has changed a lot. Young people now leverage their time to study in the city or, if they stay in the community with their family, seek an informal education in the field of health.

Some municipalities are losing their mother tongue when the parents do not already speak it and so the children don't have the opportunity to learn the language. We can say that the increase or decrease is relative. Perhaps we can say that the number of native speakers has decreased, but that is not to say that those who identify as indigenous have decreased.

Is there a crisis for the continuation of tradition for the future?

From my own experience I have seen an awakening of young people that are recognizing and honoring the beliefs and wisdom of our ancestors because it is the essence of our identity as a people. It’s part of our story, our history. The time has come to return to the path of the indigenous and Mayan spirituality, in my case Tzeltal and Tzotzil. I think that where there is a flourishing of tradition and culture, there is no crisis for the continuation of tradition for the future.

Can you tell me a story of a time when concerns arose about discrimination toward indigenous people?

Discrimination and racism have been with us since the Spanish conquest, so it is not something new. My grandparents had to live as slaves. They had no land and only worked for the land owner, their masters, and they worked hard without rest. They were abused as indigenous people and were viewed as savages.  The owners would not approach them nor let them enter their homes to give them something to eat. They always had to be outside of the house or somewhere else.  The people from Spain and other parts of Europe would take over the indigenous lands and, in turn, the indigenous would become slaves. My mother told me about how my ancestors suffered because they had no land of their own. They could not plant their own corn and beans because they would have to move often and not be able to complete a full planting season.  When my mother was born, my grandfather gained the courage to seek a better life. He went to work in Mexico City to get enough money to buy his own land so that his family could live with peace of mind, thus ending the suffering of my family. Now my family owns a beautiful piece of land in Chiapas, Mexico that will be passed down generation and generation to come.

Lindsey Mercer, a member of St. John’s United Church of Christ, Bem, Missouri, serves with the Institute for Intercultural Studies and Research (INESIN) in Chiapas, Mexico, where she works as the assistant to the Program for Institutional Strengthening.  Her appointment is made possible by your gifts to Week of Compassion, Disciples' Mission Fund, Our Churches Wider Mission, and your special gifts.