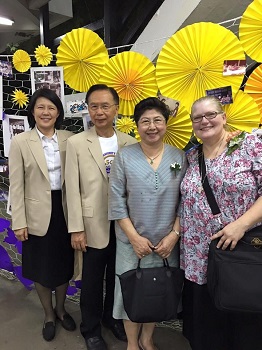 A couple of weeks ago I attended the 50th Anniversary Celebration of the Community Church, in Bangkok. This is the congregation my father helped to start when he was the director of the Community Christian Center in those years.  The Community Christian Center was a neighborhood house which offered a number of ministries—among them, after-school programs for kids, English classes, sewing classes, Vacation Bible School, Youth Group (generally people in their 20s), regular visits by a nurse and sometimes a doctor, and free milk for kids in a culture where that was unavailable and in a time when medical advice strongly promoted it. And eventually, a new church began out of all of those ministries. My father was the first pastor (and the only foreign pastor) and, at the age of 9, I was the first pianist.  Not a very accomplished one, I hasten to add. But a willing one.

Every pastor since the days of my dad was present at that worship service, and the moderator of our national church organization, the Church of Christ in Thailand, preached. Rev. Dr. Thaweesak Mahachavaroj talked of faithfulness through the 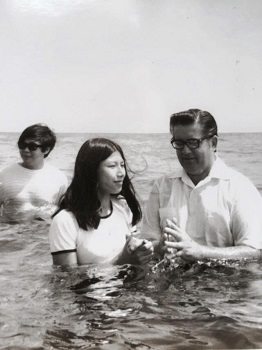 years, and of evangelism throughout the nation, in a country where Christians are 1.2% of the population, and Protestants are 0.58%. Six or seven choirs sang, as well as a nationally-known Christian pop singer.

I brought greetings from my father and spoke briefly about the early days of the congregation, and the memories I have of visiting with the architect when the church bought land and began to build on the current site. The congregation was about six years old at that point. Why I, as a teenager, was able to be present in the meetings with the architect, I don’t remember. The architect, Dr. Songkhun Atthakorn, was a distinguished professor at Chulalongkorn, Thailand’s oldest and most esteemed university. Something about the project interested him, or I would guess that the church could never have afforded his services. 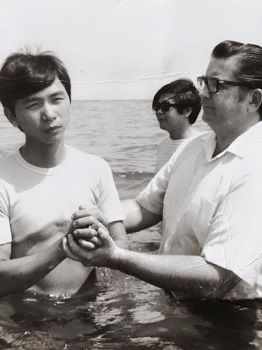 father’s youth group in the early days. One man, Mr. Suwatt Jithavech, often gives rides home from rehearsals of the Bangkok Combined Choir, and insists that everyone in the car sing along with the old camp songs and African-American spirituals they used to sing in English, back in the day.

Imagine a car full of people, some Thai, some German, some American, singing “Home on the Range,” “Swing Low, Sweet Chariot,” “Down in the Valley,” and “We Are Climbing Jacob’s Ladder,” while stuck in one of Bangkok’s iconic traffic jams, here in Southeast Asia. No, we have not sung, “It’s a Small World After All,” and no, not all of us would be aware of the history of some of those songs.

What is the legacy of a missionary? Or anyone who seeks to serve God in this world? Do we expect to be remembered?  I’ve been privileged to see a legacy of Christian love, Christian leadership, and Christian friendship. And I give thanks to God.