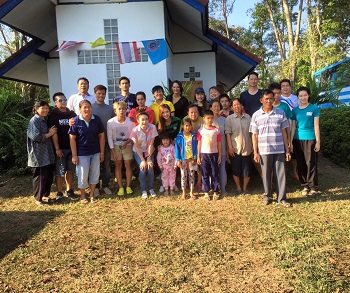 It has been nearly five months since I left the United States to work as a Global Missions Intern in Thailand. I live in a beautiful northern city called Chiang Mai. I enjoy the day to day bustle of street vendors and children on their way to school. Monday through Friday I wake up to the sunrise and the subsequent intercom blasting Katy Perry’s ‘ROAR’ that the children sing along to. I walk maybe a quarter of a mile to the Christian Communications Institute (CCI) office at Payap University. CCI is a Thai folklore biblical storytelling troupe that travels the world telling bible stories incorporating Thai culture, drama, dance, and music. When I arrived they were touring in the schools around Thailand performing 5 days a week, twice a day. They had one show geared towards elementary age children and another for adolescents. The shows included songs the kids would sing along to, a modern drama based on a story from the bible, a sermon by the CCI pastor, and prayer.

The country of Thailand is about .8% Christian, with 95% of the country practicing the Buddhist tradition. When CCI began, most of the team members were Buddhists. Some of these people began performing bible stories through Thai tradition and 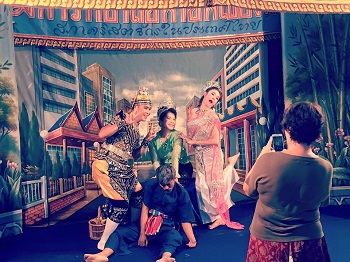 were able to understand and desired to become Christian as a result. The CCI team is now all Thai Christian members who are active in the local churches around their community.

The CCI team is currently travelling in northwestern Thailand performing Ligay, a Thai folklore drama. Ligay is known for its extravagant backdrops, bright colored costumes, garish jewelry and embellishments, and yodeling song style. The music is made by hand drums, cymbals, and xylophone. Ligay brings communities together. CCI is intentional about performing at small rural churches throughout Thailand who willingly open the performance up to the entire community, Buddhist, Christian, or other. This draws people to the church that would normally never attend and they are told bible stories in a way they can understand and receive it openly.

There is food prepared and the people create Prung Ma Lai necklaces for their favorite actors. These necklaces can be made out of paper chains, or leaves, and have gifts or offerings of money attached to them. The audience members do what Western theatre people would call “breaking the 4th wall.” The audience has free rein to interrupt and call things out to their actors, and the actors respond in character. There is no ignoring the audience, the Ligay performers always respond- sometimes verbally, with a gesture or with a laugh, and sometimes by heckling the audience back! It’s exciting and inviting. At whatever point a character strikes the heart 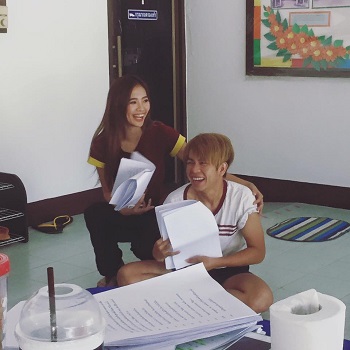 of the people, you’ll begin to see the people leave their seats with their Prung Ma Lai necklaces in hand. They walk to the foot of the stage and hold the necklace out for the actor that inspired them. Sometimes it is the comedian who gets the big adornment, and other times it’s the ingénue, evil character, or person with the most elaborate costume or great singing voice that brings the people to the stage.

The local church will house the CCI team in a large room or provide space for their tents, give them buckets of water to shower and do laundry by hand in, and provide their meals for the duration of their stay for the performance. Once the sun sets, the local church pastor will begin with worship, and then the Ligay begins. What I witness are Thai Christians proclaiming and rejoicing Jesus Christ through their culture.

The CCI team members all have unique testimonies about their faith journeys and sense of calling from God. My hope is that you would keep this team in your prayers and on your hearts this year.

Kristin Wolf teaches English with the Church of Christ in Thailand (CCT). Her appointment is supported by Week of Compassion, Our Churches Wider Mission, Disciples Mission Fund and your special gifts.