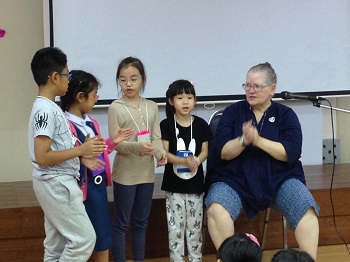 During the month of March, I’ve been working at the YWCA Summer Day Camp for elementary aged children.  (March and April ARE the summer months here.)

This kind of work scares me to death.  Ask me to create a liturgy in a flash, or to drop everything and sing a solo, or teach a Bible study with almost no time to prepare, and I won’t even blink.

Ask me to teach a roomful of 60 lively, bright, energetic 6-11 year-olds how to sing, to act, and to speak English, without sheer chaos, and I break out in a cold sweat.  Well, maybe not cold….nothing is cold in Thailand this time of year. 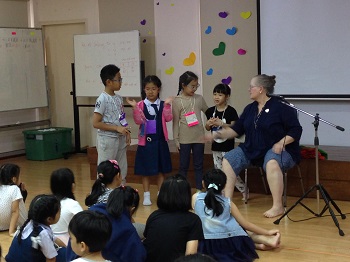 These kids love yelling or playing tag, but teaching even basic breathing, or facing the audience or not upstaging anyone….that’s a bit much to ask.  Especially when we’re all together at once.  Which we are.

Still—such joy and affection.  I can certainly see why so many people love working with young kids.

Today, one of the most affectionate of the little guys came flying into my arms from my blind side.  Thank God I was sitting on a strong chair.  What faith!  His name is “Pooh,” and he just turned 7 years old.  Yeah, just about every Thai person has a nickname, and these days, many of them come from the English language or from Japanese.  And “Pooh” sounds better in Thai.  Trust me.  We also have “Base,” “Milk,” “Inter,” “Ink,” and “Biru.”  None of these is a Thai word. 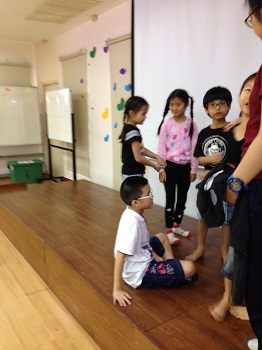 Pooh doesn’t know that a decrepit 60-year-old missionary doesn’t quite have the wrasslin’ strength he might assume I have.  But being hugged by lovable kids is pretty fun.  (For good and ill, they don’t have the same laws here about little children and affection.)

What I didn’t notice was that he had accidentally broken my cross necklace.  This is a necklace I’ve worn for more than 25 years.  It’s on a pretty strong chain.  I was able to fix it later on, though.

Later on, when I’d thought about it, I decided there was a parable here.  The Cross is a sign of death, that Jesus turned into a sign of life.  Christians have used it for almost 2,000 years as a subversive symbol, a way to show the world that we don’t conquer through force or violence, but through love and self-giving.

God’s love doesn’t usually tackle us, but today was an exception, and I’m grateful.  This past year has been difficult for me—particularly with several health issues as well as the loss of my father.  I believe that this Summer Day Camp has been a gift to me, with the love of a huge crowd of little kids.  And as Easter draws near, I’m seeing signs of resurrection.

That’s what I mean when I say, “Love broke the Cross.”