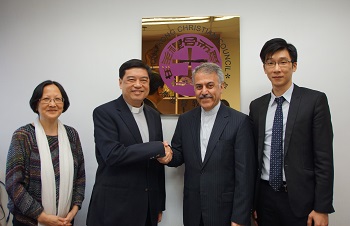 It’s not every day that the Consul General of a Middle Eastern country asks to come for a visit. But that’s what happened recently at the Hong Kong Christian Council. We weren’t sure why the Consul General wanted to see us as we had no prior connection with that country. But we said we’d be happy to meet him. Our General Secretary would be traveling on the proposed date so I was asked to represent the Council along with the HKCC Chairperson.

When the Consul General arrived with his staff, he explained that he was new to his position. Many disturbing events are taking place around the world involving violence and terrorism, and he was concerned about the rise of ‘Islamophobia’ or anti-Muslim sentiment. So he wanted to reach out to other religions in Hong Kong to get to know them and to build better relationships. In our conversation, he learned that the Christian Council is a member of the interfaith Colloquium of Six Religious Leaders, and that we actively seek to ways to build friendship and engage in dialogue with other world religions. We also learned more about his past diplomatic experience and his interest in Hong Kong society, particularly young people’s participation in the political arena.

At one point, the Consul General asked us how Christians viewed what was happening in the world where more and more violent conflicts were breaking out between cultures and religions. I thought for a moment. And the words of a Syrian Christian I had heard just a few days earlier came to mind: “Christians always stand for non-violence and non-retaliation. We must always forgive. We are taught by Jesus in the bible to love our enemies.” And that’s what I told him, because I couldn’t think of anything else that is more central to our Christian faith than loving God, loving our neighbor and loving our enemy.

As I reflected on that brief encounter, I was impressed that the Consul General took the initiative to reach out to Christians in Hong Kong. He didn’t know us and we didn’t know him. But he came in search of peace and a sign of friendship among people of faith. We gave him a copy of our English newsletter, and he asked to be put on the mailing list. I wonder what would happen if local churches and Christians took more initiative to reach out to get to know people of other faiths. We often speak of “extending the right hand of fellowship” to our Christian brothers and sisters in worship. Perhaps we could find more opportunities to shake hands with those in our own city that come from other lands and cultures and faiths. Like us, they desire nothing more than living together in peace and friendship.

In the joy of Christ,

Judy Chan serves with the Hong Kong Christian Council.  She is responsible for communications for the Council. Her appointment is made possible by your gifts to Disciples Mission Fund, Our Churches Wider Mission, and your special gifts.