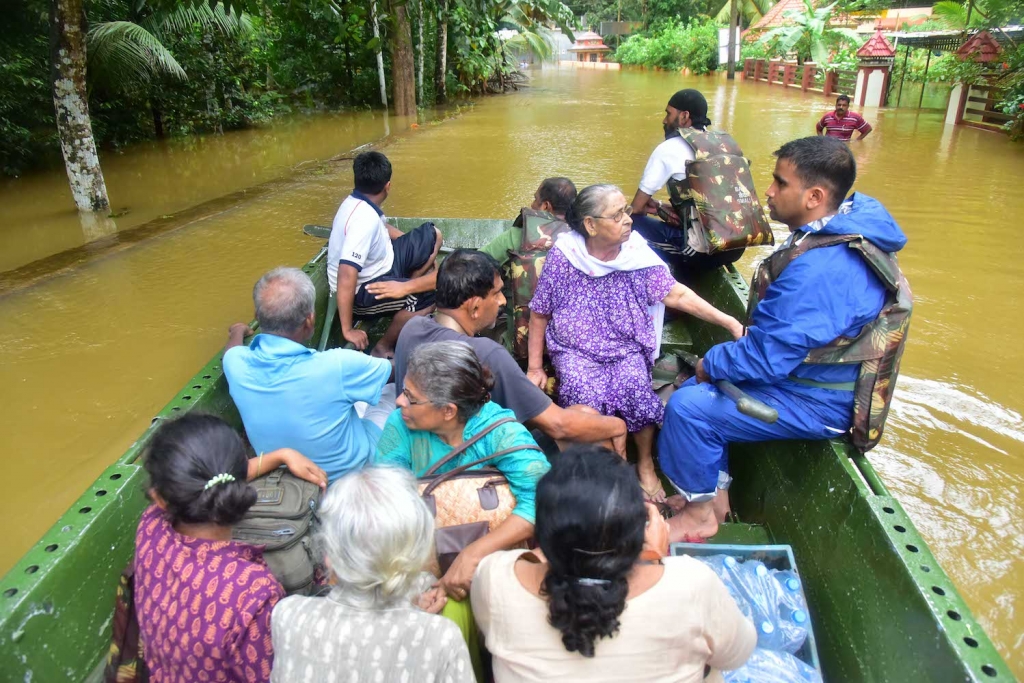 From The Church of South India

Floods in the southern Indian state of Kerala have killed more than 350 people since June. The devastating floods in Kerala peaked last week. The monsoon rains have since begun to ease and rescue teams have been deployed, but thousands of people remain marooned. The following update comes from Global Ministries' partner, The Church of South India.

The floods have caused havoc across Kerala. Places such as Ranni, Maramon, Aranmula, Chengannur, Alwaye, Paravur, Alwaye are all inundated by the floods. The hill stations and the coastal areas are equally affected. Even though the rain is gradually easing, news of the dead recovered, stranded people beyond reach, and the unimaginable number of people who need shelter, medicinal care, and food make the situation even more dire. But there is a ray of hope in that people are setting aside their differences and supporting each other. The matured approach of the state government and the political leaders, the active involvement of the people, especially the fisherfolk from the coastal areas of Kerala, various organizations in the rescue operations, and the support of churches and other religious organizations for the relief work are helping millions of people in this time of grave disaster. The Indian Army along with the state machinery continues the dangerous rescue operations. It was heartening to hear that a pregnant woman, who was airlifted by the Indian Air Force from the sinking house, gave birth to a baby boy at the navy hospital.

Young people are widely using social media to share details of stranded people and their locations and to spread the needs for the essentials in various relief camps. Unfortunately, electricity is unreliable because the distribution system has been badly damaged by the flood and the internet connectivity is low.

Those who have been rescued are being sheltered in camps. The death toll crossed 400 and the news that it may increase beyond  predictions is cause for worry. Flooding has forced the main airports to close, complicating relief efforts. Helicopters and boats have been made available for rescuing those who are stranded. More boats have been sent to Thrissur, Chalakkudi, Aluva, and Chengannur. Some stranded in a few places at Chenganoor and Chalakkudy were airlifted to safer places.

16 wings of the Army are fully engaged in rescue measures. 13 teams of the Navy at Thrissur, 10 teams at Wayanad, 4 teams at Chenganoor, 12 teams at Aluva and 3 teams at Pathanamthitta have intensified their measures. 3 Helicopters, owned by the navy, join the operations. Coast Guard personnel are engaged in 28 centers. 2 helicopters of the Coast Guard are also in the front. 39 teams of the NDRF are also there. NDRF have saved 4000 people and 550 have been saved by the Navy so far.

Most Rev. Thomas K. Oommen, the Moderator of the Church of South India (CSI) expressed his satisfaction that the colleges, schools, churches, and parish halls of the Madhya Kerala Diocese are open as relief camps following his call to help the flood victims. He lauded the tremendous relief works, which are being carried out by the Kerala Dioceses of the CSI and thanked other dioceses outside of Kerala who extend their support and show their solidarity with the Keralites in this time of suffering. He pointed out the need for working together with the government. He visited the camps in Madhuravely and other places, which are low- lying areas in Kerala and as an expression of solidarity with the suffering people, distributed relief kits.

New relief centers are opened such as Changanassery Youth centre and Baker Memorial Higher Secondary school in Kottayam under the leadership of the Diocesan Youth Movement. The relief center in the CMS College is active. Various organizations of the Diocese are actively involved in collecting food, clothing, and medicines and distributing them in the needed areas. Pallom Palliative Care unit of the Dioceses continued with their medical camps with the help of the BJM hospital. CSI Churches in Mumbai actively took part in collecting relief materials and sending to Kerala, which was organized by the Malayalee Samajam (Association of People of Kerala).