Merging the Past with the Present 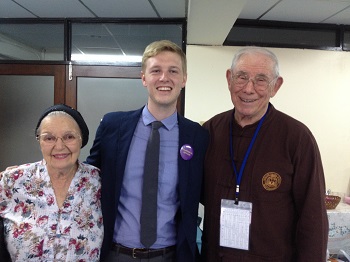 A little over two weeks ago, the Church of Christ in Thailand celebrated its 80th anniversary in the Kingdom of Thailand. For those not familiar with the CCT and its past, the CCT was founded in 1934 when three mainline denominations, the Presbyterians, the American Baptist, and the Disciples of Christ, handed over all of their mission work to the local Thai people, thus forming the CCT as one denominational body. This blending of three denominations, all with different polity, proves that the Church of Christ in Thailand is one of the most ecumenical churches in the world.

During this celebration each historical partner that formed the Church of Christ in Thailand was honored and was presented with special gifts. It was an honor to be able to represent Global Ministries at this special occasional. The Christian Communications Institute (CCI), which was founded by Global Ministries mission co-workers Joan and Allan Eubanks in 1981, showcased each historical partner’s mission work in the Kingdom of Thailand through theatrical performance.  It was
an exciting experience to sit alongside Joan and Allen while they saw what their ministry had evolved into since their retirement. They both served as inspirations to me as I listened to them tell stories of being Global Ministries mission co-workers in Thailand since 1961. 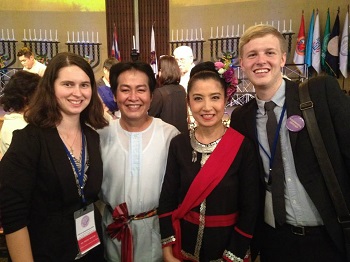 One of the benefits of being in partnership with the CCT is that the church is deeply rooted in its history. Although I was working the assembly as an ecumenical staff member, I was humbled as delegates came to thank me for the presence of the Disciples of Christ and Global Ministries in Thailand since 1903. Many came to tell me stories of mission co-workers past, while often hinting that many before me came here only with the intention of staying “a few years,” but deciding to serve God for their entire life in the Kingdom.

As the work for the assembly has passed and the memories of mission co-workers lives on, so too has my role and its responsibilities. Two weeks ago, I was officially appointed by the officers of the Church of Christ of Thailand to serve as the Ecumenical Relations Officer for Child Protection and Human Trafficking. This is an intentional step by the officers of the CCT to be the leaders of the churches’ response to human trafficking in Southeast Asia.  As I settle into my new role and begin to draft a long term strategic plan for the CCT in addressing Human Trafficking and Sexual Exploitation, the officers and I agree that there are four main objectives.  First, we must be a resource to the churches in Thailand and Southeast Asia, working to gather hard research and stories of those that have been victimized by exploitation. Second is to support the work of current CCT mission co-workers working in the area of Human Trafficking in Thailand and to create a working group of Christian workers on this issue. Working with overseas partners of the CCT is the next major objective. Many of CCT partners, such as Global Ministries, take seriously the concern of Human Trafficking. One goal for the near future is holding a roundtable with each major partner present in Thailand to discuss how we can best work together on this issue. Finally, my work will consist of advocacy, not only here in Thailand but abroad, so that others may come to know the plight of the Thai people. 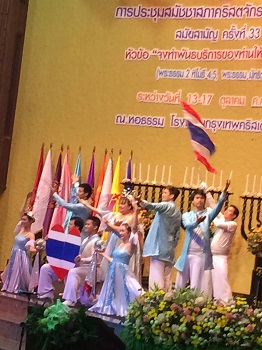 Although my work is vastly different then the mission co-workers that came before me, in many ways it is, as we would say here in Thailand, “Same Same but Different.” Hearing the stories of the past made me realize that we all have come to this country for different purposes yet, in the end, each of us came to work hand and hand with the Thai people to help accompany them as they face the realities of an ever changing globalized world.

Working for justice to preserve the integrity of creation is difficult work. Just today, I received a call from a mission co-worker who is working at a CCT school in one of the most rural parts of Thailand near the Myanmar border. She called to say that upon returning back to her village from a short vacation she was informed by the school director that a girl enrolled in their boarding program was picked up by her mother and taken to Bangkok. Upon further investigation the school came to learn, through the girl’s own brother, that her mother is a trafficker and that she could not meet her demand by her boss and therefore has decided to sell her own daughter into the brothels of Bangkok. This is the story of not only Thailand but of all of Southeast Asia, women willing to sell their daughters, men willing to sell their sons.  We have to remain on the front lines of this issue, working on the grassroots level to stop the selling of the world’s most vulnerable people.

The work of justice is never complete in Thailand or in the greater Southeast Asian region. I turn time and time again to the words that the prophet Habakkuk spoke, asking God:

“Why do you make me look at injustice?
Why do you tolerate wrongdoing?
Destruction and violence are before me;
there is strife, and conflict abounds.
Therefore the law is paralyzed,
and justice never prevails.”

These words that Habakkuk spoke are the same words I speak each day when I am faced with the overwhelming task of justice work in Thailand. Yet, I have to listen and find comfort, as Habakkuk did, in God’s response:

“Look at the nations and watch—
and be utterly amazed.
For I am going to do something in your days
that you would not believe,
even if you were told.”

Adam Royston serves as a Global Mission Intern with the Church of Christ in Thailand. Adam serves as Ecumenical Relations Officer for Child Protection and Human Trafficking. His appointment is supported by Week of Compasssion, Our Churches Wider Mission, Disciples Mission Fund and your special gifts.