The United Church of Christ in Mozambique has a Microcredit program which was started by the church’s Department of Family Development. The program is a source of hope for women and their families. The project was initially started with no outside investment and has grown to additional communities. Now, in order to participate, women must first go through training sessions on how and why one must save. Once women start to save, they are placed within a savings group. Each group numbers 25 women or fewer and the group commits to saving for six months at a time. Women in the group can borrow funds and must re-pay with 10 percent interest. Non-members can also borrow but they must have a co-signer who is a member of the group. Women who borrow funds may use them to start a business or may use them for needed home repairs or other projects. Some groups are also using some of their income to contribute to the construction of churches. The interest paid by borrowers becomes interest income earned by women who have invested in the savings group.

There are now 175 savings groups associated with the UCCM. The women have started to promote the groups by creating t-shirts that read “I am saving. And you?”

The Department of Family Development is working to expand into more communities across Mozambique. They are seeking funds so they can pay expenses to provide more training sessions in new communities.

The women of the microcredit project are staking ownership in the success of their individual and collective projects, causing an exciting growth rate for the microcredit project in the region of Beira.  With 200 women participating in the program, many women are using the microloans to sell vegetables. However, a number of women have been able to grow their businesses to larger shops selling a variety of items. This project is continuing to enable families to move from extreme poverty to self-sustainability. Women in this program now have the ability to pay for their children’s school tuition and items such as furniture and doors.

Global Ministries continues to welcome gifts for the microcredit program through the United Church of Christ in Mozambique. 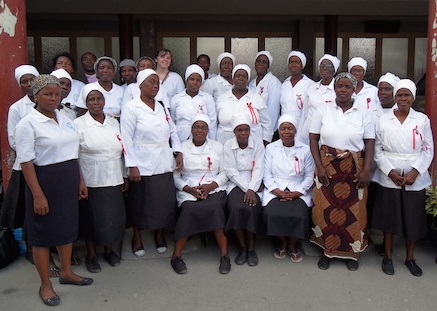 During 2015, funds received for UCCM microcredit projects were used to provide training for group facilitators.  Funds were also used to acquire new manuals for new members, which will help new small business owners navigate best practices for running their new businesses.  These trainings and materials have prepared the microcredit groups to establish their businesses and set up a network of support and community while they run their businesses.

In 2016, the UCCM plans to use their available funds for a new round in the expansion of the number of women in the microcredit program through providing initial loans.  The UCCM believes in this next stage of the microcredit project, the interest from the loan repayments of successful businesses will provide sustainability, and the project will become self-sustaining in the future.  However the serious drought conditions in the country have presented a great challenge for many of the church’s programs this year, including the women’s microcredit program. 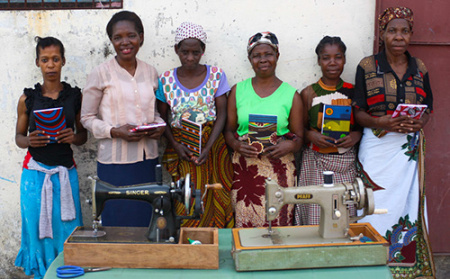 The Family Development Microcredit Project seeks to benefit female church members and their families across many denominations. Initiated by women of the UCCM in 2008, the project has helped lift families out of poverty by entrusting them with small loans for the production of goods to sell in community marketplaces. Thanks to the project, participating families have increased their income, becoming self-sustaining and able to contribute more services to the community and improve the local economy.

This year, the UCCM Microcredit Project is expanding into two new provinces: Zambezia and Nampula.As a result of four new UCCM congregations in these two provinces, one of the first projects the congregations will be offering to families is an opportunity to participate in the Family Development Microcredit Project of the UCCM. Currently, three individuals are assisting in running the microcredit projects throughout the country, and serve in the roles of coordinator, secretary, and treasurer. These three individuals will accompany the new microcredit programs as they are being formed.