새해 복 많이 받으세요  Happy New Years!  Lunar New Year’s Day, also known as Korean New Year’s or Seollal, marks the first day of the Korean lunar calendar.  It’s one of the most important and widely celebrated national Korean holidays. This year, the year of the red rooster (정유년), the holiday was celebrated over 4 days, January 27- 30.  Businesses and ecumenical offices were closed, and subway trains and streets were a little less crowded. Therefore, to the joy of many of foreigners, one could easily find a seat on the buses and subway trains. 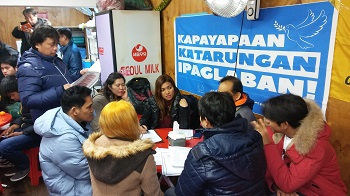 While many Koreans were traveling, visiting family and friends, and celebrating the Lunar New Year; members of the Filipino community gathered together to celebrate the 19th Anniversary of KASAMMAKO (The Unity of Filipino Migrant Workers Association in Korea).  Everyone who entered the basement floor of the KAINAN SA HYEHWA for the event was welcomed with a lot of love, warm smiles, and hugs.

The anniversary program opened with a call to worship and a song of praise, “Purihin ang Panginoon” (Let Us Praise God).  As we lifted our voices together in song, Filipino migrant workers presented items that represented the joys and struggles of living and working in Korea.  A pair of gloves, a roll of ribbon, cloth, and towels were all items which are symbolic of the labor, sweat, and tears poured out each day in the factories and textile industries in Korea. Mr. Laorence Castillo, Rights and Welfare Coordinator, at Migrante International rendered a powerful keynote address, acknowledging that the key to change rests in the hands of the migrant workers. Change can happen by unifying migrant workers globally and empowering them to be actively engaged to break down walls of injustice and move more towards self-sustainability.

The 5th largest group of migrant workers in South Korea is from the Philippines. Over the past 40 years, many Filipinos have journeyed to other countries for employment. The upsurge in migration from the Philippines to other countries for employment came as a result of the Labor Export Policy under President Ferdinand Marcos in the 1970s.  During that time, unemployment rates were high due to a shortage of employment opportunities in the Philippines. The Filipino government promoted and encouraged overseas employment as a viable option to earn a living. Overseas employment became a “system” and the number Filipino migrant workers increases each year.

Many Overseas Filipino Workers (OFWs) are accomplished professionals from a variety of occupations such as: nurses, teachers, CPAs, engineers, IT technicians, and those in the hotel and restaurant management industry.  However, most are not permitted to work in their field. Like the majority of immigrant workers, whether documented or undocumented, they are relegated to the “4D” labor: dangerous, dirty, demeaning, and difficult jobs. Therefore, these professionals are working as domestic helpers or in factories.  Victims of labor, civil, and human rights violations. Migrant workers struggle against poor treatment by their employers, substandard wages and harsh working conditions, non-compensation for work related injuries, overtime abuse, unjustifiable fees added to airline tickets, and scams. 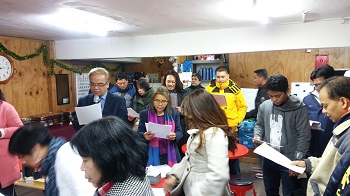 Additionally, OFWs are afflicted with inherent systemic financial burdens from the Philippines.  Exorbitant passport and travel documentation fees and collection of remittance fees and additional taxes by banks are customary. Filipino Migrant organizations such as the KASAMMAKO and member organizations fight for migrant worker rights and work tirelessly to assist them in filing complaints, confronting issues, combating workplace abuse, and legal issues.

The problems that migrant workers experience today are the same problems that have plagued the labor exportation community over the past 40 years.  However, the country began to have a renewed sense of hope with the recent election of President Rodrigo Duterte.  As a Presidential candidate, Mr. Duterte ran on the campaign slogan, “Change is Coming.”  Migrant workers who were apathetic to voting in previous elections, were energized and became active in the election process once again.  Seventy percent of migrant workers voted in the 2016 Presidential Election due to this promise of impending change and the hope that the people would no longer have to endure forced labor migration.  Following his election, President Duterte promised a “Better Philippines,” in which this generation would be the last generation to be sent out as foreign workers.  This promise resonated loudly and fueled the flame of hope in the hearts of the Filipino people.

Today many people, Filipinos and non-Filipinos, stand in solidarity with migrant workers and their advocates in migrant struggles and the fight for justice and advocacy. Currently, there are 9,000 innocent OFWs being detained all over the world without legal representation. They are seen as “property” to be exported. There continues to be many heart-breaking stories but, the people are not deterred! Instead, it causes us all to roll up our sleeves and fight harder, speak louder, and cry out to the Lord more earnestly.    “In our dreams, God whispers promise and hope.  In the waking hours, God calls us, “‘Come, we’ve work to do.’” - 19th Anniversary of KASAMMAKO

Kahala Cannon serves with the Presbyterian Church in the Republic of Korea (PROK). Her appointment is made possible by your gifts to Disciples Mission Fund, Our Church’s Wider Mission, and your special gifts.