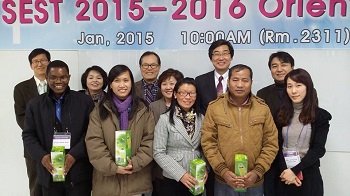 The two-year masters program “Studies of Ecumenism and Social Transformation” (SEST) at the Graduate School of Theology of Hanshin University in Korea, began on January 19, 2015.  Four out of nine students were in attendance and enrolled in the 7 week-long intensive Korean language course during this past winter. Other students are scheduled to arrive before the spring semester officially begins on March 1. Those students will join the class at a later time due to visa issues or miscellaneous family situations in their respective countries. We pray that all the students will be able to meet together on campus with no difficulties. It is amazing that two students from Africa joined our program for the first time. Although the program originally centers on the context of Asia, it is now broadening its focus toward African countries. There are students from Ghana, India, Indonesia, Japan, Malawi, and Myanmar. They will reside on campus for two years and volunteer at local churches during the weekends in order to acquire Korean language skills as well as to become acquainted with Korean culture.

The matriculation service and orientation was held on January 29 to provide words of introduction and welcome to the SEST program for the incoming students. The faculty and students were invited to this special service. Dr. Yeong Mee Lee, the Director of International Academic Affairs, led a prayer that asked God to bless the students and the program. All participants sang hymns in English and Korean. I was asked to preach a sermon for the worship. I chose Matthew 3:13-17, the story of Jesus’ baptism, with the title “A Voice from Heaven.”  I indicated the importance of our faith in God who revealed God’s self through Jesus in the River Jordan. I further explained that the event was carefully orchestrated from Heaven and executed onto the fertile plains of Israel. I reminded them that the same God would be executing intentions for us again this school year; God is the director, and we are all invited to participate in God’s divine drama. My sermon concluded with a prayer that we may hear the same voice from heaven: “This is my Son/Daughter, the Beloved, with whom I am well pleased” (v.16-17).

The dean of the Graduate School of Theology, Dr. Kyu-Hong Yeon, delivered a welcoming message, emphasizing that the students were not guests, but important members of Hanshin University. After worship, the new students had time to introduce themselves and share how they came to join the program. One student from Africa told a moving story about his spiritual journey. He had been reading the Bible since childhood and wished for a chance to study abroad. He wanted to learn more about the Bible during his high school years, but other circumstances led him to enroll in a technical college to further his career. However, he was not satisfied by his studies. He sought advice from a local pastor and was encouraged to enter a seminary. Thus, he became a Presbyterian pastor and served several churches, but his wish to study abroad was never forgotten. He heard about the SEST program of Hanshin University one day at the office of the Church of Central Africa Presbyterian (CCAP) and finally decided to submit an application. Finally, after many years, his life-long wish was granted. He offered thanks to God for guiding his life and for allowing him the opportunity to see his dream come true.

The event was a great moment of excitement and thanksgiving.  We were all called to the Hanshin community as planned by God. I would like to give thanks to God as well as the churches and the individuals who made the program possible. Furthermore, I would like to pray for God’s guidance through this program. I hope all the students and faculty will be strengthened by hearing God’s lovely voice, “This is my Son/Daughter, the Beloved, with whom I am well pleased.”

Daniel Lee serves with the Presbyterian Church of the Republic of Korea (PROK). He serves as chaplain at Hanshin Graduate School. His appointment is made possible by your gifts to Disciples' Mission Fund, Our Churches Wider Mission, and your special gifts.