Moving Forward - and Back - to Beirut 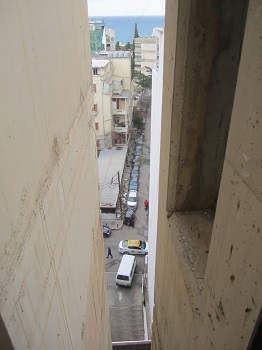 It felt more like a homecoming than a new arrival as we stepped out of the Beirut airport’s customs area and heard a cheer go up from a small crowd holding floral bouquets, gathered to welcome us to Lebanon. Since our arrival only 2 days ago, our time has been filled with reacquainting ourselves with friends and colleagues we have known over the past 34 years, ever since our first excursion to Lebanon.

The year 1983 was Nishan’s first excursion there, as Lebanon is Maria’s birthplace. That year, as a married seminary couple, we traveled to Beirut on a “Fellowship for Theological Study in a Third World Country”, awarded by the United Church Board for World Ministries (the predecessor body to the UCC’s Wider Church Ministries). We were housed at the Near East School of Theology (a partner organization), or “NEST”, as it is known locally, where Nishan continued his M.Div. studies, while Maria worked as a nurse in the Intensive Care Unit of the American University Hospital.

Now, sitting in mid-day traffic jams, inching forward to our destination, we realized how “history was rhyming”. Once again we were heading for NEST, where we are being temporarily housed by the Union of Armenian Evangelical Churches in the Near East (UAECNE), a partner church to Global Ministries, and the calling body for the two of us.

These first few days have been fairly rigorous, filled with hugs and kisses, flowers and food, visitors and invitations, selfies and stories… and much more! After unpacking, we dealt with logistical concerns, things such as Internet access, local phone numbers, exploring the neighborhood while dodging motor-scooters, navigating uneven sidewalks, and running into familiar faces. Since we are only a block away from the American University of Beirut, we are in a fairly cosmopolitan part of the city. Tony, whom we found sitting in his darkened shop during a regular power cut, ironically selling electrical appliances, talked about the city and the changes it has undergone. “You know, the Lebanese are a funny people. They keep leaving Lebanon, but then they keep coming back!”

Along with the many friends with whom we have reconnected in the past 48 hours, we have also gotten to meet some new people (lest you think we know everyone here). Of particular significance was meeting our neighbor across the hall at NEST, Bethany Waggoner, who is a Global Ministries Volunteer working with the Middle East Council of Churches (MECC). We sipped a cup of Arabic coffee and heard about her work and activities since her arrival in September 2016.

Today Maria had an overview meeting with Rev. Dr. Paul Haidostian, President of Haigazian University. Most of her time will be spent assisting the Development Office, and the rest will be with the UAECNE’s conference center and other related institutions. The university is familiar territory to us both, as Nishan served as Haigazian’s Campus Minister from 2000-2007.

Tomorrow Nishan will be attending the UAECNE’s monthly pastors’ meeting, chaired by the Rev. Megerdich Karagoezian, President of the Union. There he will have the opportunity to share with his colleagues a bit about his new position at the church headquarters, where he has been called to help with communications, worship and music, and leadership training.

After a few months, we hope to be moving to our permanent home, on the top floor of the UAECNE headquarters located in the eastern part of the city, closer to the majority of the Armenian community. Yet being where we are now is advantageous at this time of transition and adjustment. Having these few months in the western part of Beirut will help Nishan concentrate on his intensive Arabic study and give him daily contact with the theological students at NEST.

These few months of rapid change in our lives, during which we found ourselves trying to juggle a host of responsibilities, from concluding our church responsibilities, to selling our house, to packing our goods, to focusing on our upcoming work, forced us to rely on the gracious presence of the Lord, who promised never to leave us or forsake us (Joshua 1.5). Too much of what we experienced was more than coincidental – it was the Lord’s guiding hand. It was humbling to witness the One who called us remaining faithful to us each step of the way.

As you make your journey through this season of Lent, whether it feels like you are moving forward or back, may you also experience the faithfulness of God, who in our Lord Jesus showed us what it means to look to God, and not to our changing circumstances, to find the strength to face each day with grace and hope.

Nishan and Maria Bakalian serve with the Union of Armenian Evangelical Churches in the Near East (UAECNE). Their appointment is made possible by your gifts to Disciples Mission Fund, Our Church’s Wider Mission, and your special gifts.