by Global Ministries (Disciples of Christ and United Church of Christ) | published on Apr 29, 2019

On April 29th, Cyclone Kenneth touched down just six weeks after Cyclone Idai. Cyclone Idai displaced thousands and claimed the lives of almost 500 people in Mozambique and Zimbabwe. Tropical Cyclone Kenneth has caused death and destruction in the Comoro Islands, Madagascar, Mozambique, and Tanzania. An estimated 38 people on Africa’s southeastern coast have died due to Cyclone Kenneth.

The United Church of Christ in Mozambique (UCCM), a Global Ministries partner, has shared that the situation in the northern part of the country is getting dire where more than 20,000 families are homeless as a result of Cyclone Kenneth washing away their homes in mudslides.

Reverend Lucas Amosse, president of the UCCM, wrote, “Cyclone Kenneth destroyed everything that was left after Cyclone Idai. We do not know how we shall survive. Only God knows. We ask your prayers for the many broken hearts. There are people who do not know where to go or how to start rebuilding their lives. We are in a real crisis.”

Gifts may be sent for Global Ministries partners in Mozambique, or to Week of Compassion (Disciples) or One Great Hour of Sharing (UCC).

The United Church of Christ in Mozambique (UCCM) has been providing food items and clothes for families displaced by the cyclones. In coordination with the government providing food for families affected by the cyclones through local centers, the UCCM has been able to distribute meals to those who have not been receiving meals from the government or other relief organizations.

In addition to providing food for displaced families, the UCCM has begun reconstruction on the school, church, offices, community areas being used for their relief programs , a nursery, and several homes owned by the church in Beira on their main campus. The UCCM will continue to reconstruct and rebuild churches and homes damaged by the cyclones throughout the country. Additionally, they are making plans to include disaster response and emergency preparedness topics in the next trainings of pastors and church leadership. Below are photos from the UCCM’s food distribution and the reconstruction projects they have started. 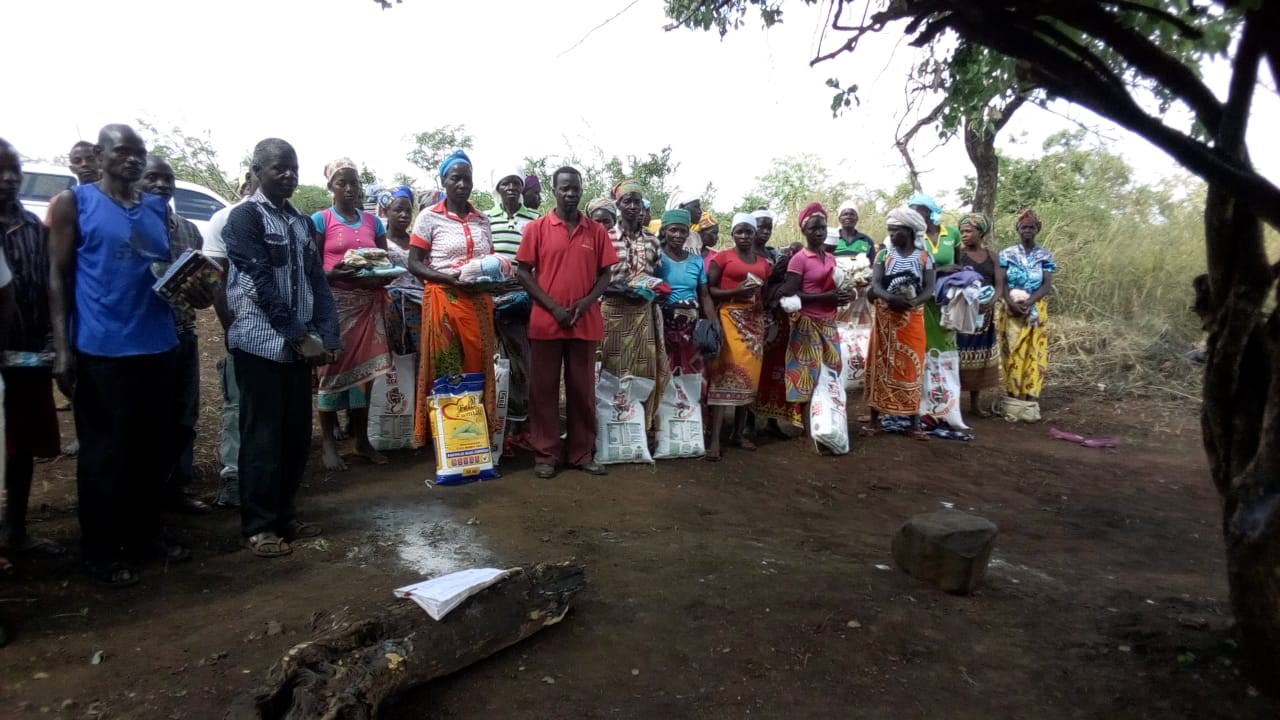 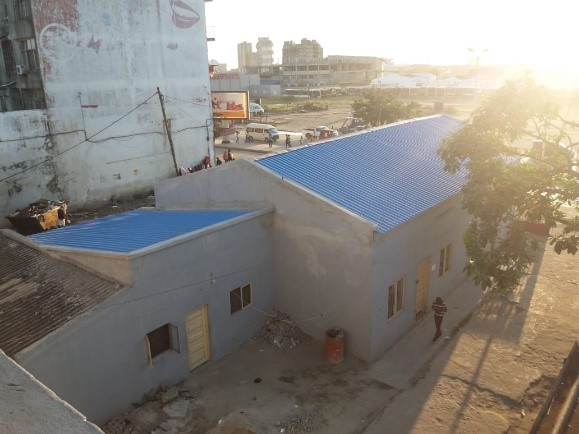 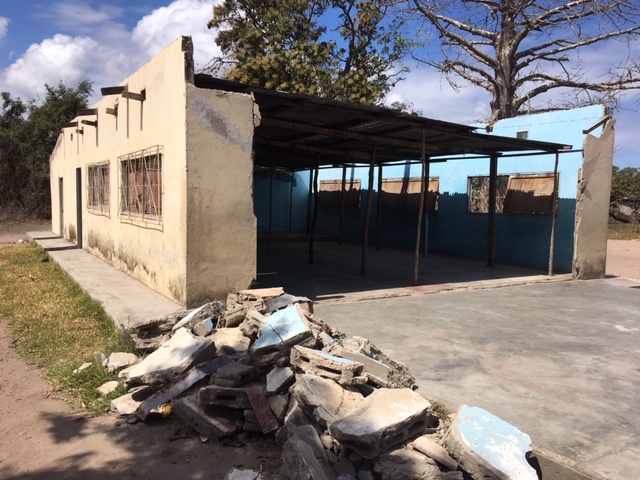 Almost six months following the first cyclone to strike Mozambique this year, the United Church of Christ Mozambique continues to provide relief and accompaniment for families affected by the disaster. Immediately following the cyclones, the UCCM offered an initial response of offering temporary shelter, food, hygiene kits, and water.

Today, the UCCM is focused on rebuilding and repairing destroyed buildings, and offering pastoral care for those affected by the cyclone. Current priorities include the rebuilding homes for pastors, repairing the roofs in chapels, offering financial support for widows, and counseling children displaced by the cyclone. 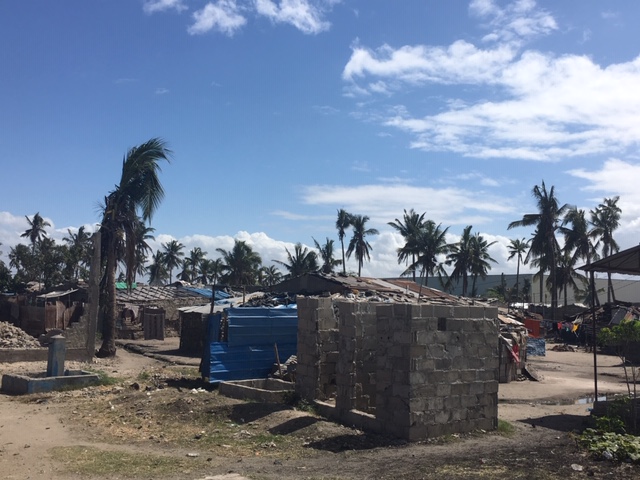 In August, Marco Cable, the Executive for the Global Ministries Africa Office made a pastoral visit to Beira to witness the devastation caused by the two cyclones, see how the church has already provided for communities impacted, and to pray and be present with the church. The church executive and he visited a number of communities in Mozambique. Returning from this travel, Marco shared a reflection about one experience that stood out:

We arrived to a village just outside of Beira City in the late morning to be met by members of the congregations joyfully singing and showering the president of the church and me with rose pedals. They stood in rows to receive us as it is the their custom. I was introduced as the visitor from the United States from Global Ministries. Then the delegation I traveled with received greetings from the local church pastor, the chairperson of the congregation board, and the community elders. As we were concluding our visit, a very elderly lady who was slightly slunched over approached me with excitement in her eyes. With the assistance of a translator she asked: You are from the United States? My son, are you really from the United States? I replied, “yes, Mama, I am from the United States!” She continued with her questions: “So you rode the big plane in the sky and cross the massive ocean just to see me? You came just to see me and all my children behind me?” Again, I replied, “Yes, Mama I came to see you and all of your children.” To which she concluded, “My. My. My. My son from the United States has come so very far just to see me and it makes my heart so very happy.” 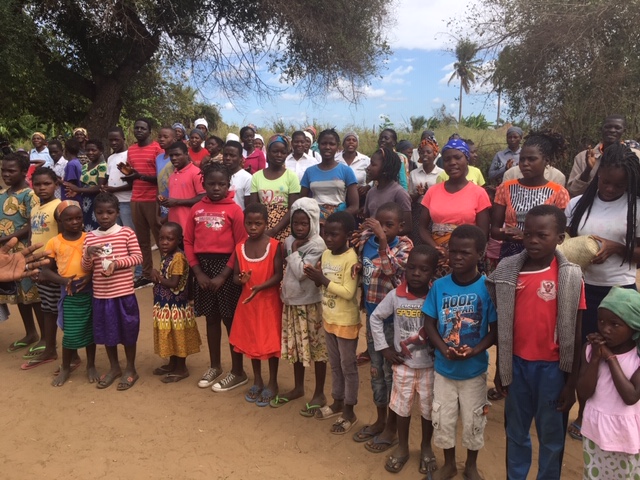 That is the work of the church through Global Ministries. To be present with our sisters and brothers through life’s joys and concerns and to mutually accompany one another which leads to joy, unspeakable joy and the opportunity to be Christ’s presence even if it means traveling on a big plane in the sky and crossing an ocean.

Following the damages caused by Cyclones Idai and Kenneth in Mozambique, the United Church of Christ in Mozambique (UCCM) has been offering relief and long-term recovery efforts to support families and communities most affected by these disasters. Areas most affected by the two cyclones and where UCCM has a presence includes Beira, Dondo, Nhamatanda, Buzi, Sofala and the Chiure district in Cabo Delgado. 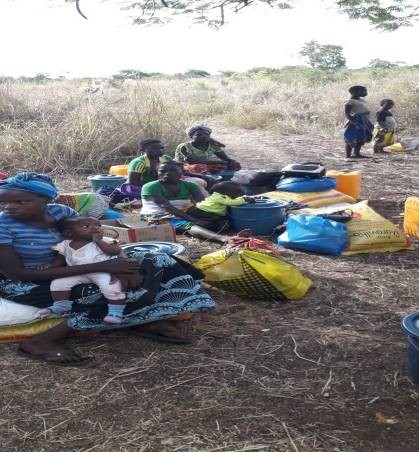 The initial response of UCCM included immediate relief for families who were without food and shelter. UCCM purchased and distributed maize flour, cooking oil, beans, rice, sugar, salt, and clean bottled water. The roof of the UCCM main offices was taken off by the winds and therefore internal rooms filled with rainwater. To create a distribution center for food and hygiene items, the UCCM decided to repair the roof of the main offices first. This way, the church could use this space as a place to meet, host trainings, and to store relief items.

Following the immediate response in the community, the UCCM repaired schools and health centers so that the church could continue offering education and health care. At the same time, the UCCM has been helping families rebuild homes for their families and delivering construction materials to do so.

Together with the Mozambique Ministry of Health, the UCCM offered training for volunteer teams to visit communities and provide public health education. Volunteers learned about topics such as avoiding cholera, boiling contaminated water, and hand washing. Young women and men from inter-religious and non-religious organizations of Mozambique are volunteering to help. Other volunteer groups received training on searching for elderly and disabled community members. Volunteers in these groups are bringing meals and care for ailments of elderly and disabled people, including the arrangement of transportation to health care centers when necessary.

In addition to providing the physical materials and health services to support families and communities, the UCCM has been offering spiritual and emotional support. The UCCM shares, Recovery has not been easy for those who lost almost everything. However, the church continues to console and encourage these communities with the word of God, sharing of food, and delivering construction materials.