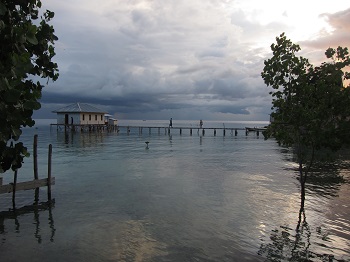 “People want to forgive, but not forget,” said a villager in a community in the Indonesian province of Central Sulawesi in which Muslims and Christians are learning to live in peace again after years of periodic violence between these two faith communities since 1998.

In another village in a “red zone” where there is still conflict, the head of the predominantly Christian village said that the community’s slogan is “We are the same; we are a family.”

In the intervening 17 years since violence first erupted in and around Poso, the largest town in the area, the nature of the violence has changed. Initially, the conflict was between the Muslim and Christian communities, but today it is confined to fighting between the security forces and a small group of 20 men hiding in the nearby mountains.

It is in this context that two members of Interfaith Cooperation Forum’s (ICF) regional network in Poso, in conjunction with other local groups, organized a peace workshop from April 23 to 25, 2015, in the rural coastal village of Kalamalea. Both members of the network—Gunawan Primasatya, a Muslim man, and Suwarti Ningsih, a Christian woman—attended the School of Peace (SOP) conducted by ICF in 2010 in Bangalore, India.

During the workshop, which was attended by 20 Muslim, Christian and Hindu young people, the participants discussed the past and current situation in Poso and the efforts that have been made to bring about peace based on the experiences of the youth. One of the local resource people explained that the government responds to the conflict but not the issues behind the violence, such as high unemployment.

A topic that sparked a great deal of discussion was religion and radicalism that was presented by Tirmizy Abdullah, another 2010 SOP alumni who is from Mindanao in the southern Philippines. Tirmizy noted that religious radicals make the claim, either consciously or unconsciously, that “God is with us and God is not with you; we can do violence because God is with us.” Another aspect of their attitude and actions, said Tirmizy, is an unwillingness to compromise—again, presumably because they believe they have a mandate from God.

As for the causes of religious radicalism, Tirmizy explained that it is a reflection of people’s weakness, that there is often a relationship between a person’s economic well-being and their motivation to embrace religious radicalism. Moreover, based on his experience in the Philippines, Tirmizy added that politicians align themselves with religion, especially during election campaigns. In Mindanao, a predominantly Muslim area of the Philippines, a practice of politicians, he said, is to yoke themselves to Islam. Thus, if a candidate or citizen opposes them, they are, in effect, appearing to oppose Islam as well.

My contribution to this program was to offer an overview of the wars and other violent conflicts in Asia in the past century. Afterwards, I asked the participants to reflect on why people fight wars; what are the conditions that foster war and what are war’s roots causes; what are, in addition to war, other forms of violence, such as poverty, the exploitation of workers, land-grabbing, domestic violence and environmental degradation; and finally, how to promote peace.

Among the answers to these questions was that people go to war to realize self-determination or over territory, natural resources, power and ideology or because of discrimination and exploitation and other human rights violations and, especially in more recent times, to uphold one’s identity. The list of conditions that were discussed and provide fertile ground for war are nationalism, undemocratic political systems, division based on one’s identity (including religious identity), poverty and its various symptoms, such as unemployment, and weak legal systems that foment corruption and impunity. At the root of violent conflicts, however, it was determined that there is injustice and broken relationships. As for ways to promote peace, some ideas that were shared at the workshop included building relationships with other religious and ethnic communities before there is conflict and becoming advocates for those who are marginalized by discrimination and exploitation.  Lastly, it is important to work against corruption and for a democratic political system and a legal system that is fair and speedy.

As noted earlier, the workshop experience also included field visits to villages still facing conflict and to communities that have achieved reconciliation between Muslims and Christians. This exposure gave us new insights into the current reality in the area. In the villages where Christians and Muslims are once again living together, the people explained that both Muslim and Christian leaders made this development possible. Moreover, the villagers are adamant that they do not want the violence to return, that the violence benefits no one.

This emphasis on reconciliation and building relationships was reiterated by two of the workshop resource people—a Lutheran pastor and the leader of the Muslim youth group Ansor in the area. The Lutheran pastor said that in his interfaith program the Muslim youth speak at the provincial Christian council and that Christian youth speak at Muslim centers of theological education. Meanwhile, the leader of Ansor said that part of the annual interfaith activities of his Muslim youth group since 2013 are to protect churches on Christmas.

The program concluded with the participants discussing ways to use the insights they had attained and other follow-up activities, such as conducting workshops in churches and mosques and using social media.

Among the aims and objectives of ICF are to build a network of youth working to address the injustices afflicting Asia’s marginalized people and thus, an important aspect of this program was that it was held at the grassroots level with the participants staying with families in Kalamalea—one of the first ICF programs to do so.

Another important feature of this workshop was the inclusion of Tirmizy, a SOP alumnus from another country as a resource person for an ICF national forum activity—again, one of the first times this has occurred.

This workshop has given me a lot of hope for the future of interfaith relationships in Central Sulawesi. The organizers received 70 applications for the 20 places in the workshop, indicating that there is a lot of interest in the Poso area in maintaining peace between Muslims and Christians, especially among its youth. This sentiment was also true among the people in the villages we met during our field visits in which Christians and Muslims have resumed living peacefully together. Creating and nurturing these relationships are one of the strongest safeguards to ensure that the two faith communities can live together peacefully as neighbors in the future.

Bruce Van Voorhis serves as missionary with the Asia and Pacific Alliance of YMCA’s in Hong Kong. His appointment is made possible by your gifts to Disciples Mission Fund, Our Churches Wider Mission, and your special gifts.