With a tug on my sleeve I turn to face a boy, maybe 14, with an old coffee can under one arm and a wooden polishing kit in the other. Hands dirty and a face thin, he points to himself and says, "I Mahmoud. Suri. Aleppo. Polish? Little money? Schawarma?" Despite my own polishing moments before I left my room, I agree for a touch up. Carefully rolling up my pant leg just above my ankle, Mahmoud begins to carefully handle my shoes like a work of art. First a cloth to rid them of the morning dust, then a toothbrush of polish. And finally another cloth to buff-out a shine. Lowering my pant leg, Mahmoud stands up, and I ask, "How much?" Paying him we part ways. 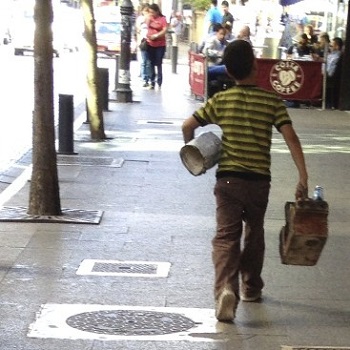 In the weeks since that first encounter Mahmoud always makes an effort to say hello as we pass on the street. As he and his fellow youth walk the streets of Beirut's Hamra district, little doubt remains regarding the effect the Syrian crisis has had and continues to have on those forced to call Beirut their new home.

Over the course of my year in Lebanon, the number of shoe polishers has seemed to steadily increase each week. Though some are from Lebanon, the majority are from Syria. Many have lost portions of, or all of, their families due to the crisis in their home towns and villages. And, knowingly or not, all have joined the quite fraternity of displaced who call Lebanon "home".

Taking shelter in many of Beirut's architectural skeletons, remnants and reminders of conflicts past, the displaced in Lebanon struggle to find employment in an economy already plagued by political stalemate and the fear of sporadic and spontaneous violence.

For those forced to resort to trade on the black market, illegal employment on one of Beirut's many construction sites, or begging on the street, finding enough income to provide basic items for living is a daily struggle.

Although the Syrian refugees are the most visible, they are by no means the first non-Lebanese to call Lebanon "home". Be it Armenians fleeing the atrocities and genocide of 1915, or Palestinians fleeing the Nakba in 1948, or Iraqis fleeing the instability and violence of the 2003 invasion, Lebanon has welcomed, though at times reluctantly, millions of the region's displaced.

This mosaic of residents contributes both to the colorful diversity of Lebanon's domestic, as well as the challenges of navigating a deeply sectarian society; a society that places high value on hospitality, but maintains a degree of skepticism and hesitancy, the result of a tumultuous history.

Despite its current position as a host, Lebanon has also been the source for nearly one million displaced during its own periods of conflict. During the Lebanese civil war (1975-1990) and the weeklong July 2006 war between Hezbollah and Israel, Lebanese, as well as non-Lebanese, found themselves struggling to find refuge from war.

From my current position in Lebanon, both the positives of voluntary and the negatives of forced migration are evident. For many of my friends, the former is viewed as the only way out of a current system blocked by the personal political whims of an elite few.

Whether immigrating or emigrating, the integration of new with existing is often a process breeding contention and at times confrontation.  Here, the struggle lies between the preservation of identity in the face of animosity and prejudice. It is at this intersection where many Lebanese and international organizations, including the Forum for Development, Culture and Dialogue, view a need and opportunity to foster understanding and dialogue between all of those who call Lebanon home. It is precisely this welcoming spirit of solidarity and the bolstering of social cohesion that serves as a counter to those forces seeking to divide.

Especially during this current period of tension and uncertainty, those who call Lebanon home continue to fight to maintain a peaceable existence for all. For everyone, their lives truly depend on it.

Andrew Long-Higgins serves as a Global Mission Intern with the Forum for Development, Culture and Dialogue in Beirut, Lebanon.  His appointment is supported by Week of Compassion, Our Church's Wider Mission, Disciples Mission Fund and your special gifts.