My Peace I Give to You 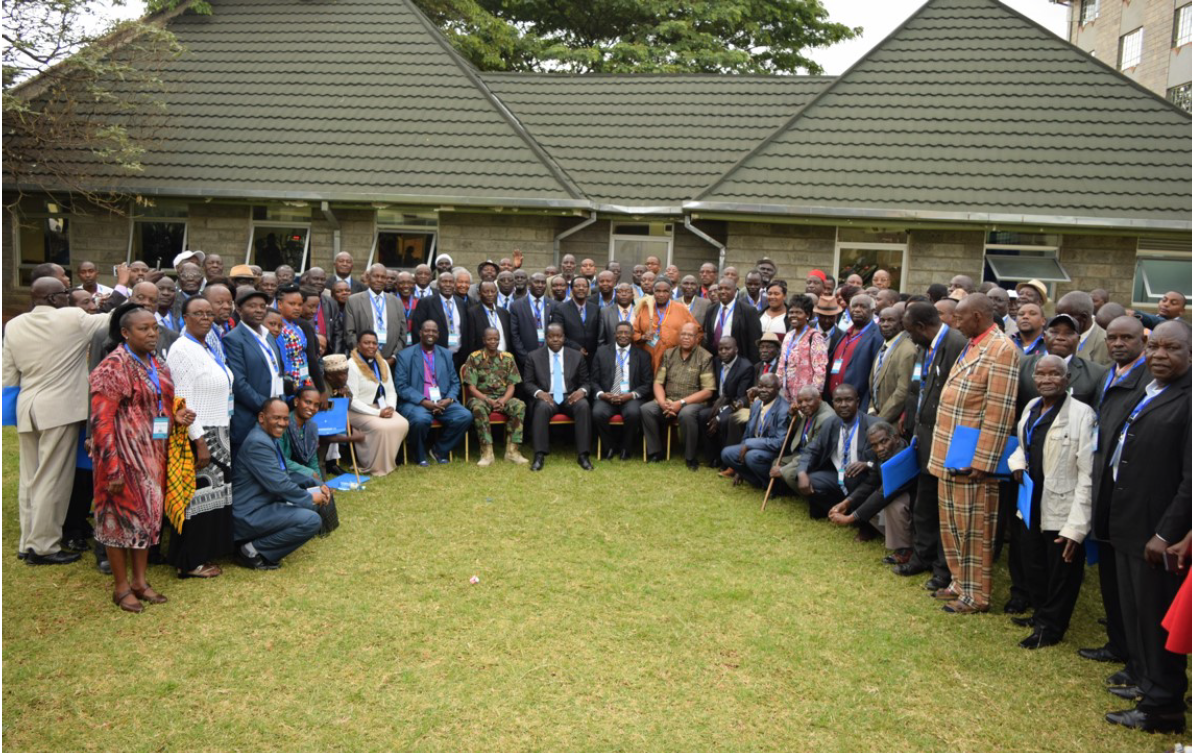 More than 200 senior clergy, elders, women and youth leaders from a majority of the communities in Kenya have met here at All Africa Conference of Churches (AACC) Conference Center from 24th – 26th July 2017 to review the national preparedness for the General Elections. This Consultative Forum was co-organized by the AACC and the National Council of Churches of Kenya.

So that there should be no division in the body, but that its parts should have equal concern for each other. If one part suffers, every part suffers with it, if one part is honoured, every part rejoices with it.

We embraced the lesson of this scripture as we highlighted the centrality of peace in the nation before, during and after the General Elections that will be held on 8th August 2017. Appreciating that we have only 12 days to the elections, we wish to reiterate the following messages as we champion for peace in the country.

1. NO COMPROMISE ON PEACE AND SECURITY

The Constitution of Kenya 2010 provides in Article 81 (e)(ii) that Kenyans have a right to “free and fair elections which are free from violence, intimidation, improper influence or corruption”.

We therefore emphasize that peace and security are paramount during and after the elections. It is the responsibility of every Kenyan, individually and through institutions, to reject every provocation to violence. There is no justification for anyone to foment violence, knowing that whatever grievances they may have with regard to the elections can be addressed through the mechanisms provided for in the Constitution and the Law.

It is on this basis that we call upon all Kenyans to emphatically reject and refuse to vote for any candidate who attempts to provoke violence in the country.

2. PARTICIPATE IN THE ELECTIONS

As Clergy and Elders, we call upon all eligible Kenyans to actively participate in the General Elections by peacefully voting for your candidates of choice. We wish to remind you of the injunction given in James 4: 17

Anyone, then, who knows the good he ought to do and doesn’t do it, sins

As a Kenyan, who is aware that you are expected to vote for good candidates for the different positions, you will have sinned if you don’t participate in the elections.

3. ONLY ONE WINNER PER ELECTIVE POSITION

This meeting wishes to remind all Kenyans, and in particular every voter, that there will be only one winner for each position being contested for. Do not believe a candidate who declares that he is the only one who can win the election. In democratic processes, each candidate has as high a chance of losing as of winning. As a supporter, do not get intensively emotionally entangled with the bravado of the candidate you support or the opinion polls to the point where you will have challenges coping should he not win the position. Support a candidate of your choice, but psychologically prepare that another candidate may win the position. Do not participate in violence or chaos on account of your candidate of choice winning or losing at the elections.

4. ACCEPT THE RESULTS ANNOUNCED BY THE IEBC

As per the Constitution of Kenya 2010, the mandate for organising and managing elections in Kenya is bestowed on the Independent Electoral and Boundaries Commission (IEBC). The IEBC is therefore the only body with authority to declare the results of elections in the country. We call upon every Kenyan to accept and go only by the results announced by the IEBC, and not any figures announced by any other person or body whether identical or different. Where there is a reason for any candidate to question the results announced by the IEBC, then the laid down procedure of filing a petition in court should be followed. No one has a right to cause or participate in chaos or violence on account of being dissatisfied with the results announced. On the same breath, we call upon Kenyans to celebrate candidates who win with moderation and sensitivity that those whose candidates will lose in the contest will be hurting. 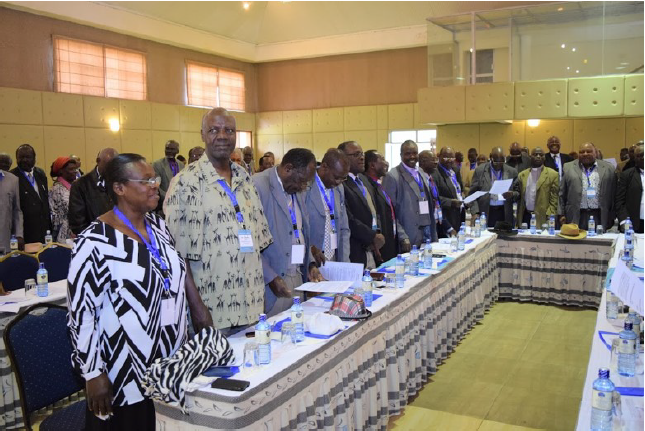 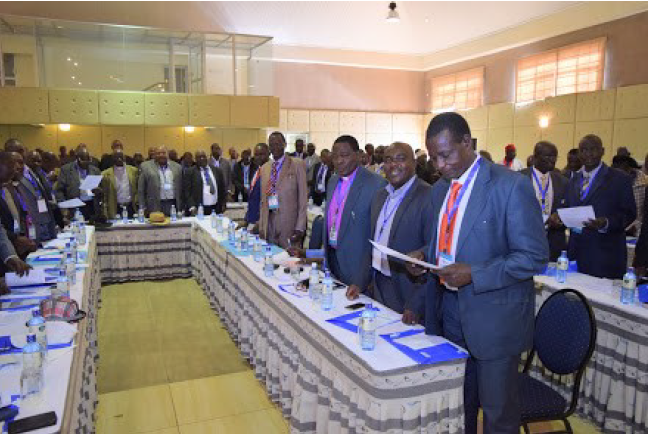 On their part, we wish to remind the IEBC that the lack of information is what fuels speculation and propaganda. As such, the IEBC must ensure that there is a system to continuously update Kenyans on election results and tallies.

We call upon the political parties and coalitions which have chosen to organize their own tally centers to appreciate that the results they arrive at are their internal material for use as they please but not for any mobilisation outside the legal structures.

The nation of Kenya is made up of all the communities that live within our borders. And since the communities will continue to live with each other after the elections, we urge for the reinforcement of frameworks for peaceful co-existence. We must not handle the General Elections as though they are an event that will define the permanent fault lines between our communities but merely a milestone in our national conversation.

We state here our commitment that as Clergy and Elders, we will continue to reach out to community leaders from our neighbouring communities to ensure that there are peaceful relations before, during and after the elections. We have committed ourselves to publicly denounce any candidates who attempt to instigate hatred and violence between our communities before, during and after the elections.

The Clergy and Elders gathered here today wish to remind the Judiciary, the National Cohesion and Integration Commission (NCIC) and the IEBC of the scripture recorded in Ecclesiastes 8:11

When the sentence for a crime is not quickly carried out, the hearts of the people are filled with schemes to do wrong

The greatest tragedy in Kenya has been the consistent failure to have law breakers speedily and harshly punished. This has bred a culture of impunity that has continued to undermine the spirit, aspirations and provisions of the Constitution of Kenya 2010 and the law.

We therefore urge the Judges and Magistrates in the country to speedily determine cases touching on breaches of electoral laws and make their rulings before the elections. Candidates who are convicted of violating the electoral laws should be barred from participating in the elections.

We also challenge the IEBC to impose harsher punishments on candidates who have breached the electoral laws. Imposing small fines on them only goes to entrench their sense of invincibility.

On its part, the NCIC must demonstrate total impatience with those who perpetrate hate speech and incite their followers to violence across the country. The NCIC must work with all other relevant agencies to have all hate speech perpetrators prosecuted speedily and robustly.

7. WOMEN PARTICIPATION IN THE ELECTIONS

This meeting notes with concern that out of the 2,507 candidates vying for the positions of President, Governor, Senator and Member of National Assembly, only 140 are women. It is clear from the outset that the one-third gender rule in the Constitution will not be adhered to, which will open the door for litigation after the elections.

Further to this, the women candidates are experiencing extreme levels of intimidation and violence. This is a major challenge since our communities are patriarchal by nature and thus women political aspirants have greater obstacles to overcome than their male counterparts.

We call upon the NCIC and the National Police Service to put special focus on the women candidates to ensure that they have protection as they finalize their campaigns. Any competitors who hit out against the women on the basis of their gender should be charged for hate speech and gender abuse.

This Forum also wishes to raise concern with the names in the party lists that were presented to the IEBC for nominations. As Clergy and Elders, we know the names of women who have been actively participating in party and community leadership, and are surprised that priority was given to other considerations when preparing the lists. It was our hope that parties would facilitate public participation in the generation of the party lists, which would have ensured that those nominated are those who can benefit both the parties and their communities. We urge that this anomaly be remedied.

This meeting of Clergy and Elders has taken into consideration the wounds inflicted on Kenyans by repeated politically driven ethnic divisions. We thus resolved to take the following measures and strategies:

(v) Encourage Clergy, Elders, Women and Youth to register with the IEBC as observers of the General Elections before the 28th July 2017 deadline. Such observation will be on a voluntary basis and non-remunerative

Kenyans are now set for the General Elections to be held on 8th August. We commend the IEBC for working tirelessly to put in place the framework for the elections in a very short time while being faced by countless obstacles.

We conclude our Forum by urging all Kenyans to remember four key points:

One, participate in the General Elections by voting for your candidates of choice

Two, accept that there will be only one winner for each elective position, and that winner may or may not be the candidate your support

Three, accept the elections results that are announced by the IEBC, and encourage any who are not satisfied to file petitions in court

Four, build bridges with members of other communities, for not only will you continue to live with them after the elections, but you will also need them

Peace I leave with you; my peace I give you. I do not give to you as the world gives. Do not let your hearts be troubled and do not be afraid (John 14: 27)

Signed on this 26th day of July 2017 at Desmond Tutu Conference Center, AACC, Nairobi for and on behalf of the Clergy, Elders, Women and Youth Leaders present: