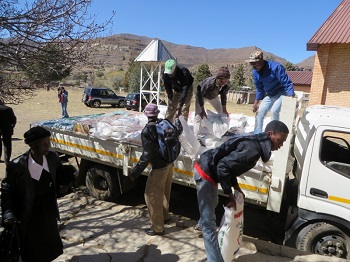 “There are three things that are never satisfied, four that never say, ‘Enough!’:  the grave, the barren womb, land, which is never satisfied with water, and fire…”  (Proverbs 30:15-16)

The land in Lesotho, at least here in the lowlands, never seems to have enough water.  In the Maseru and Morija area we had two days of good rain in mid-October.  But the skies have turned blue again and we’ve already had several days with baking temperatures in the low 90’s.  The landscape looks very thirsty once again. 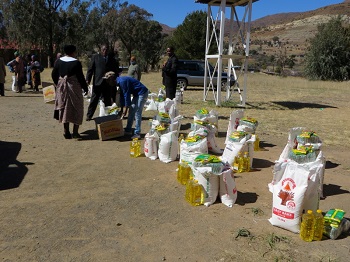 As I have written in previous newsletters, Lesotho had a dire drought last growing season.  The forecast is for more normal rainfall this time around and we are praying that we will be blessed with frequent and soaking rains.  Back in late August the Mothers’ Union fellowship of the Lesotho Evangelical Church in Southern Africa (LECSA) was called upon to coordinate the distribution of donated food aid.  Two hundred and forty households benefitted from this assistance given to recipients, both LECSA and non-LECSA members, in the worst-affected areas of the country. 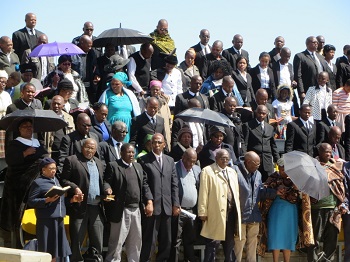 Something else we never have enough of is peace.  On a Sunday in September the LECSA held a walk for peace and justice in the town of Mafeteng prior to holding an outdoor worship service for the community at the local soccer stadium.  The district of Mafeteng has for some years now been plagued by a series of murders involving members of rival famo music groups.  Famo music, which prominently features the accordion, originated with Basotho miners working in South Africa back in the 1920’s and its distinctive style is still quite popular today.  Those attending the service joined hands in praying for an end to the violence that has troubled the area for so long. 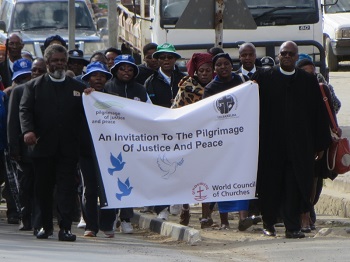 At the end of October the LECSA held its annual Leeto la Thapelo (Journey of Prayer) event.  Thousands of church members gathered from early Saturday morning until Sunday afternoon.  Prayer sessions (right) were held where people were invited to come forward to be prayed for by the pastors and evangelists.  Saturday night these servants of God were kept praying from 11pm until 3am, so long were the lines of people craving intercession.  One can never have enough prayer.

their presbyteries.  When they march in very slowly singing and dancing as they bring their offerings, it is quite a spectacle to behold!  It literally takes hours for these waves of processions to be completed.

Prior to the Saturday night prayer session there were at least 5,000 people, perhaps several thousands more, in attendance for the evening service of Holy Communion.  It was indeed a very holy and moving sacrament seeing the multitudes quietly 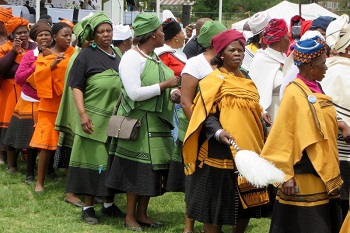 streaming out of the darkness to the light where the clergy offered them the elements in remembrance of our Savior Jesus.  So many people, yet such stillness!  There was a powerful sense of the presence of the Most Holy. 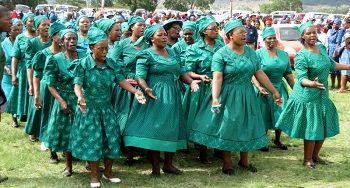 presence:  “My soul thirsts for God, for the living God…” (42:2). A Journey of Prayer is a great way to experience our living God!