New Developments from the Congo

I hope the New Year has greeted you well. I pray that in 2018 you will experience good health and happiness.

It’s been almost three years since I arrived in the Democratic Republic of the Congo.  I continue to be inspired everyday by the faith, spirit, and resilience of the Congolese people.  I want to thank you for this opportunity to work alongside the Community of Disciples of Christ in Congo (CDCC) as a demonstration of genuine partnership, love, and mutual respect between CDCC and Global Ministries.

Political and economic challenges in DR Congo persist, but that doesn’t stop the people from waking up each morning to thank God for another day, and continue the struggle for positive change in their country. Despite poverty, conflicts and everything you read and hear in the news, there is an abiding sense of purpose and pride among the people.  And there’s new hope in the full cooperation of the faithful, both Catholic and Protestant, in calling for democracy and free elections. 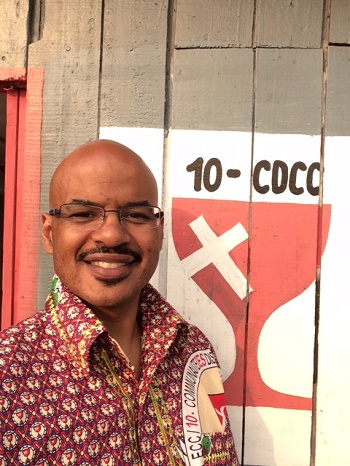 In 2017, I assisted CDCC in creating a Development Office to directly oversee, plan, and report on the myriad of development activities the church was undertaking. The CDCC Development Office made a tremendous impact in the capacity of the church’s sustainable development efforts. For example, several years ago the CDCC Agricultural Training Center in the village of Ikengo (e-kan-go) lost all of its animals to disease. Today, with new vaccinated animals, the center is once again producing eggs and meat products. Food security is atop the list of priorities in the Equator Province, and the center plays a vital role in promoting this priority.

This past year the CDCC also focused on the need for climate adaptation in the Equator Province. The region has been hit hard by climate change, which is causing longer dry seasons in some areas, and unexpected floods in other areas. The unpredictability has upset the cycle of cultivation and movement of goods along the many rivers and waterways in the province. In response, we were able to locate the in-country offices of the Global Climate Fund to begin a conversation about supporting climate adaptation strategies in the Equator Province. 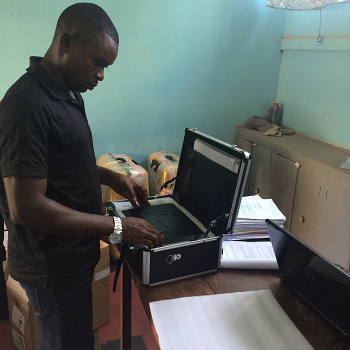 The partnership that formed between the US Embassy Self Help Program and CDCC has also been renewed with more commitments into 2018. The Equator Province is often passed over for international partnerships because there are no open conflicts in here. Instead, the partnerships and the money go east where the fighting is located, and therefore most Non-governmental organizations (NGOs). However, together we are making the case that fighting poverty is the best long term solution that impacts all of DR Congo, and can lead to greater political stability as well.

In 2018, the CDCC Development Office looks to:

o   make use of abundant plantain and bananas to produce flour,

o   assist CDCC posts with climate adaptation and training, and

This is just a partial list of the development activities CDCC is undertaking to improve the lives of people in the Equator Province. In DR Congo, the church remains a trusted and vital institution that is taking responsibility for holistic development, bringing the whole Gospel to the whole person.

Again, thank you for your prayers and support of this critical presence in DR Congo.

Paul Turner serves with the Disciples of Christ in the Congo as a project consultant. His appointment is made possible by your gifts to Disciples Mission Fund, Our Church's Wider Mission, and your special gifts.