Palermo Perspectives: Having to Think about / Deal with Race

As part of my Global Ministries placement this summer, I am to share my reflections. So every couple of weeks, I will also send a “Palermo Perspective” to Old First, sort of a report since you all are making my summer service possible. 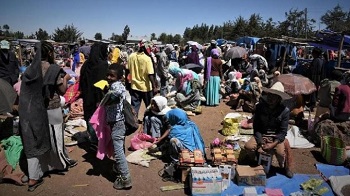 Last Thursday night, we were waiting to go into a play being performed in an decommissioned church building. One of the young men from Casa Mirti (the program for unaccompanied minor immigrants) had a leading role in the play.

It was kind of a long, inexplicable wait (something that’s not unknown in Italy! Or maybe I just don’t understand enough Italian to know what’s going on much of the time!)

But I was hanging outside the church with the young Africans, talking, mostly being silly. I really enjoy my time with them.

But all of a sudden — I don’t know how it came up– Sharif looked at me and said, “We suffer a lot of racism here.”

It was a surprising revelation. Not because I doubted the truth of what he said. But because I thought racial divides in Palermo were significantly smaller or at least less animated than what I know from the U.S.

I had heard a young Italian girl, maybe 10 or 11, asking her parents while we walked in the Santa Rosalia parade, the city’s patron saint’s festival, “Why are there Africans here with us?” Her parents explained they were citizens of Palermo too. The young girl got quite animated and loud while she elaborated on her response of “not really.”

I don’t think I was naive about racism here. The young men won the trophy in an anti-racism soccer tournament — there must be racism! Especially because on top of all the endemic racism in European countries, as in European-American countries, Palermo is feeling the pressure of having received a large influx of ethnically-other immigrants lately. Since most of them are folks of color, it’s too easy a mistake to conflate one’s discomfort or target one’s anger about the influx of immigrants with the race of most of the immigrants.

But only that afternoon had the issue of race ever been mentioned in any conversations with the young men. I was out clothes shopping with Diawara — the man who was staring in the theater performance we were waiting to see — and Kareem (they have a small allowance to buy personal items). I was teasing Diawara about being “Signorle Stylistissimo”! And he looked at me, with his hair in mod, mohawkish dreads and said, “You know, Black men and white men have different styles.” You think? I just laughed.

It happened again a few days later. I was packed into the church van taking young Nigerian men back to the Camps after worship when I heard a young man in the very back of the van refer to me as “that white man.” Apt description as I was the only white person at church in Trapani that Sunday. But more often I’m referred to as “the American” by people who don’t know or can’t remember my name.

Anyway, back to what Sharif said while we were waiting for the theater. “We suffer a lot of racism here.”

He then relayed a story of an old Italian man coming over to him and spitting on him on the street for no reason. I have long worried how difficult it must be for young men (and women) of color, trying to establish themselves as adults, as their own person, to bear the insults and disrespect of racism.
It’s been my concern, at least since I heard Zeke, Elijah and Lionel’s stories in youth group back at Church of the Living Hope in East Harlem.

I wondered if it was harder for Sharif, having grown up in an all (or almost all?) Black world in Gambia to suddenly encounter racism as a young man in his late teens? And also in a time in his life when immigrating to Italy has thrown everything else in his world into chaos…

I was reminded of a former parishioner of mine in Brooklyn, Mary. As part of her Master’s program in public service administration, she as doing an internship in post-apartheid South Africa. As an African-American woman in her late thirties, she was excited about experiencing a Black majority for the first time. She was hoping that in South Africa, issues of race wouldn’t take up so much space in her life.

I teased her that she didn’t have to go so far: Fulton Mall in downtown Brooklyn was an all Black world (in those days, but probably not anymore…)! But I heard her. And pointed out that for most of the other members of our congregation — that was mostly West Indian (or more correctly folks from the Caribbean Community of nations) — they had been raised in majority if not all Black environments. At the time, I wondered if that grounding made encountering racism later any easier? Now I wonder if coming upon it later makes it more difficult?

But unlike Sharif or Mary, we don’t have to think about it. For whites, it’s a choice. An issue or concern that doesn’t have to take up so much space in our lives. Or one which we chose when and where and how to give attention or space to.

White Americans can and often do live in essentially a “whites only” world. Either by conscious choice or by where they find themselves. By whites only, I’m not just speaking of geographical communities that are deliberately or historically-accidentally segregated, like Montana. I am also thinking of places in our society where Blacks seem to not have access.  For example, the graduate school of Arts and Sciences ceremony at UPenn last May was one of the most non-black crowds I’ve experienced in Philly.

There’s rarely a possibility for people of African descent living in North America or Europe to avoid dealing with whites and racism. They have to find their place in and make their way through a world that favors whites. Not because there’s anything in the world that has to find whites favorable, but because that’s racism. Period.

Sharif also told me that night that he believes the racism he and other Africans have to face here in Palermo is much worse than what Blacks face in the U.S. That startled me too.  As I explained, I thought that after milennia of foreigners and their influence had been felt in Sicily, there was a greater “move over and make room” attitude here. But how would I know? How would Sharif know for that matter? I suspect at his age that his viewpoint has more to do with images from Black American music videos and the influence Black culture has in American society and on much of the artistic expressions we export. Anyway, while comparative struggles may be helpful for advancing justice struggles, ranking suffering seems to be less fruitful and more dangerous…

Diawara, the stylish young man who was in the play, has found his place in a diverse activist and arts community. That offers him support for what he faces. Diawara, from this experience, appreciates Palermo for the opportunities living on a border affords.  I feel the same way about my neighborhood in Philadelphia, but I wonder if my Black neighbors feel the same about the advent of us whites.

I don’t know if Sharif has any community like that in his life beyond Casa Mirti, the program he’s in where I volunteer. But Sharif is a smart young man and I pray that he will find his way through the complexities and the unfairness before him.

Not everyone does. For many, racism packs too much punch or takes up too much room in their heads, lives, and worlds…

“We suffer a lot of racism here.”

A hard fact of life that ought not be — an experience that we whites can barely glimpse, much less imagine.

Instead, we — white people — choose whether or not we want to take up the issue at all. Or when and were and how…

I often hear whites disclaim the effects of racism because “I am not my  forebearers who treated Black so badly.” Ok. But doesn’t even our failure to engage — anything less than becoming an active ally — in the anti-racism efforts our Black neighbors deserve,  leave us being part of the problem?

“We suffer a lot of racism here.”

Can we, who do not even recognize the choices we are privileged to make, even begin to understand? Or respond?

Michael Cain is a short-term volunteer with Mediterranean Hope