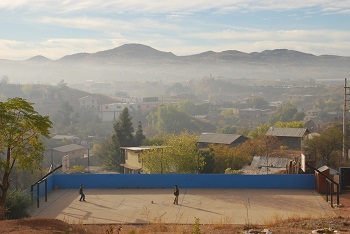 The neighborhood where I live in Nogales is called Bella Vista (“Beautiful View”).  The view disappears in the haze on these winter mornings as desperate impoverished people burn whatever they can to ward off the cold.  This toxic reality of corporate “free trade” was not addressed during the recent “Climate Change Conference” in Paris.

The U.S. government demanded that the emissions reduction targets set by individual countries not be legally binding, and that countries harmed by climate change should not be able to take legal action for that damage.  As reported by Naomi Klein, that’s exactly opposite to the U.S. stance on “free trade” agreements, which are legally binding.

The North America Free Trade Agreement (NAFTA) that converted Nogales into a sprawling industrial city enables corporations to sue governments if the corporations feel they’re not being treated fairly.  The Trans-Pacific Partnership trade agreement that was signed by the Obama administration in October, and the Trans-Atlantic Trade and Investment Partnership that is currently being negotiated, both include legally binding provisions for corporations to sue governments.

Prior to the implementation of NAFTA, there were trees on the hills around Nogales.  Twenty years later, there are nearly 100 “maquiladoras” (assembly plants) and the trees are gone.  The products made in those plants cannot be ones that are needed by the people of Mexico but, by law, have to be exported.  The largest plant in Nogales is Chamberlain, which employs more than 3,000 workers that make garage door openers.  There is only one house in our neighborhood with a garage, and it doesn’t have a door.

Chamberlain; Kimberly-Clark; Master Lock; Becton, Dickinson and Company; and other U.S. corporations have plants here to take advantage of the cheap labor.  The minimum wage in Nogales, Sonora is $4.25 per day as compared to $8.05 per hour in Nogales, Arizona.

The maquiladoras have access to all the water and electricity they need to make products that freely cross the border but the workers do not enjoy that same privilege.  The water in our neighborhood is purchased from tanker trucks that fill storage tanks located on the roofs of homes.  Drinking water is bought from pickup trucks that drive through loaded with 5-gallon jugs.  The price of electricity explains the haze in the air and the occasional house fire in winter.

The U.S. government recently spent $187 million to modernize the port-of-entry to make it easier for hundreds of diesel trucks to cross the border daily with products from the maquiladoras, and produce grown in the states of Sonora and Sinaloa.  The government also spent tens of millions of dollars to install a taller, and stronger, border wall to ensure that workers do not leave the maquiladoras in search of higher pay in the U.S.

As long as “free trade” is protected more than the environment and workers, the toxic haze will continue to engulf Nogales.  However, if we truly follow the call to “love your neighbor as yourself,” we can work together to change those priorities; and to create a future as beautiful as the view used to be here in Bella Vista.  A future in which we care for the needs of all our sisters and brothers, and respect and honor our Mother Earth.

Scott Nicholson serves as a volunteer with the Hogar de Esperanza y Paz (Home of Hope and Peace) community center in Nogales, Mexico. His appointment is made possible by your gifts to Disciples Mission Fund, Our Churches Wider Mission, and your special gifts.