This is Steve. Steve had just touched the sand for the first time and immediately pushed himself along with his little flippers looking for his new home, the great Pacific Ocean. Steve was born among hundreds of Golfina Sea Turtles before dawn on Wednesday morning. I hardly got the chance to know Steve. I really don't know whether Steve was even male. Yet I connected with him. 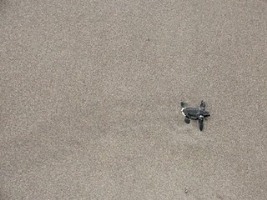 This is Steve.  Steve had just touched the sand for the first time and immediately pushed himself along with his little flippers looking for his new home, the great Pacific Ocean.  Steve was born among hundreds of Golfina Sea Turtles before dawn on Wednesday morning.  I hardly got the chance to know Steve.  I really don't know whether Steve was even male.  Yet I connected with him.

I woke up from my slumber in the hammocks on the beach along with the group visiting from Eugene, Oregon, and set out to take part in the taily turtle release on the beaches of Tasajera Island.  All along the coast of El Salvador, and much of the Pacific Ocean, volunteers stay up all night looking for endangered sea turtles coming ashore to lay their eggs.

The group and I had walked along the beach the previous evening, splitting up.  Half of us walked north, and the other half walked south.  I walked with the unlucky half.  Those who went the other way described the mother turtle they saw and her power and grace as she climbed up the beach and laid her eggs in the flat sand before returning to the sea.  The volunteers, known as tortugueros move the precious eggs to a safe place where they can keep watch, protecting them from poachers and predators.  Those who went north also came across a turtle.  The foul stench led us to the corpse that the tide had brought ashore.  The tortuguero who accompanied us thought it probably died in an indiscriminate fishing net from a commercial boat, an example of just one of the many dangers the turtles face as they fend off extinction.

The tortugueros collect newborns at the break of day and release them into the ocean.  Of every thousand turtles born, only one will form a mating pair that will lay new eggs years later, so the tortugueros protect them as much as possible.  We then followed them to the shore.  They brought buckets full of the little creatures who rhythmically tapped on the plastic as they struggled to make their way forward.  After brief instructions, the group picked up the turtles by their shell and set them on the damp beach.  They had to touch the beach first to imprint it on their "microchip", the chief tortuguero explained.  They then began to run away from the racket of the people and toward the crashing of the waves.  A wave would periodically come up over them and wash them out to sea, where they would live and grow in their dangerous new home.  The group released hundreds of turtles that calm morning, but one stood out.

Steve joined the march as one of the last and promptly commenced his journey.  Waves that should have swept them away would only come in to wash Steve and a few of his buddies back up the shore, ready to try again.  Eventually only Steve remained.  I wanted to help, but also wanted to see him make it, so I watched along with a few others as Steve struggled to find his place in this new and frightening world.  Every new wave that pushed him back brought more and more frustration.  Steve took longer pauses as he regained his energy.  Each new step merely covered the same territory.  His destination seemed out of reach.  And we kept encouraging.  We'd tap the sand if he steered off course, hoping to direct him away from us.  We knew he could make it, no matter how hard the fight.

This trip to Tasajera Island rounded out a series of excursions that filled my latest two weeks in Central America.  I accompanied this group from First Congregational United Church of Christ in Eugene as they continued to develop their partnership with the people of the island, running medical checkups at a clinic they helped construct, and joining in community activities.  Previously I had traveled to Nicaragua to visit my friends at the Iglesia Misión Cristiana (Christian Mission Church), our Global Ministries partner, and to Costa Rica to stay with our partner there, the Latin American Bible University.  These trips helped me broaden my experience and see new perspectives.  I saw struggles, but I also saw faith.

In Tasajera, I saw a very peaceful community that comes together for sporting events, music, and socializing.  The people of Tasajera fish for a living, but the same boats that cast nets on the sea turtles' pursuit of happiness also cast doubts on the island's economic future as they leave less for the locals.

In Nicaragua, I saw the pouring rain as I rode the bus into Managua, the capital city.  I saw the tops of the buildings and houses sticking out of Lake Managua after it had reached record levels.  I learned that entire neighborhoods had been evacuated as they sank under the rising lake.  In Acahualinca, near First Christian Mission Church in Managua, 507 people had been living in the classrooms of a nearby school ground.

In Costa Rica, I saw a group of people who face hardship and discrimination every day.  The university arranged for me to attend a midweek service at a local Lutheran congregation during my short stay.  The church holds a weekly "inclusive service" that focuses on diversity with an emphasis on diversity of sexual orientations.  On the bus to the church I wondered about this.  Shouldn't all church services be inclusive?  Do we need to attach a special name to it and single people out?  It didn't take me long to realize that I was taking part in something special.  I saw people who face hardship and discrimination find common ground with all people in faith.

As though at a campfire, we sat around the altar in a circle and sang hymns accompanied by an acoustic guitar.  When it came time for the message, each person had the opportunity to participate by letting the scripture speak directly to us, so that we could bring our own experiences to it, whether from the point of view of a married woman, a gay man, someone struggling to find acceptance in a society that emphasizes male dominance, or someone from any walk of life in which we might find ourselves.  That week we read from Luke 17: 5-10 and talked about faith.  The faith I saw in everyone's testimonies amazed me.  I now fully understand the importance of a special service for those who might have nowhere else to turn.  We all need a space where we can find our place in this dangerous, frightening world.

I chose to participate as well, speaking from the point of view of a missionary.  In my work I see such difficulties, like the excessive rains that have wiped out crops all across Central America, causing the price of basic staples like beans and corn to soar, yet I see such faith, such constant marching forward despite constant setbacks.  Why can't I have faith like that?  I often approach Jesus, much like the apostles did so long ago, and said, "Increase my faith," and Jesus always responds, "If you had faith the size of a mustard seed, you could say to this tree 'Be uprooted and planted in the sea,' and it would obey you."  I don't need more faith.  I already have the faith I need.  If I put my faith into action, perhaps with the aid of others tapping on the sand to keep me on track, the things that need to happen will happen.  The hardships will not overcome us.

The rest of my travels have shown me the truth in this.  For I have seen people of diverse sexual orientations share in communion with the Body of Christ.  I have seen the members of First Christian Mission Church in Managua find sets of clothing appropriate sizes for each of the 507 displaced people living in the classrooms of a local school.  I have seen those who live in the fishing communities of Tasajera continue their way of life while actively seeking alternative ways to supplement their income.  I have seen the wave that finally uprooted Steve from the sand and planted him in the sea.

Who knows what will become of Steve?  Surely he will find unceasing threats from predators, pollution, and nets.  The odds certainly don't favor him.  He already got off to a late start.  But Steve has found the freedom of the wide blue ocean.  He can feel the joy of his movement through the water, the relief of having overcome his struggles on the beach.  No threat should bother Steve now.  Steve has found his place, the place he needs to be.