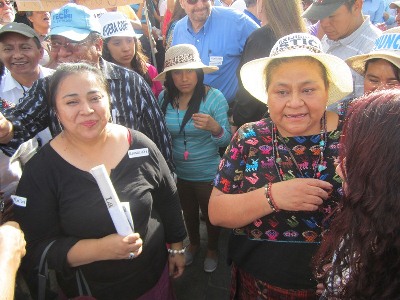 Prayer for Guatemala
Creator God, we kneel before you with humility and ask for your guiding light and power to shine upon the people of Guatemala today when the country encounters a moment of historical political crisis and a moment of discernment as well.  Today, the young population in the country has made it their goal to ensure and demand the accountability from the three branches of their government.  They are feeling frustrated, overwhelmed, and betrayed by the people who have embedded themselves into these branches of government with the end of robbing Guatemalans from their taxes, ridiculing the justice system, and contriving and utilizing the laws for their interests.  They hold the current Administration responsible for encouraging this cancer of corruption that is destroying an entire country’s future and annihilating an already weak and almost inexistent democracy.

We ask you Lord, that the people of Guatemala may find the right path out of this very complicated labyrinth and crisis.  Just like in biblical times when your people had the very God among them and even then they could not distinguish and having the very bread before them and still they did not know it.  Today, we ask you Lord that the Guatemalan people find their way to your kingdom, your peace and your love and only thereafter find an adequate and righteous path out of the current crisis.  We ask this in your name, remembering your Son Jesus Christ, Amen. 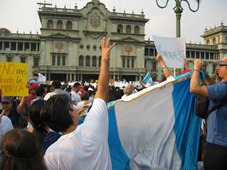 Mission Stewardship Moment from Guatemala
Greetings from Guatemala land of “Eternal Spring, Eternal Tyranny” as Jean-Marie Simon called her book, first published in 1988.  Her book was not only a professional and well researched journalistic work but also one of the most clearly laid out photographic testimonies of Guatemala’s history during the civil war and the government enforced oppression in the country. As I have listened to the news this year and as I have witnessed the number of protests and outcries in the country against many members of government and social service officials, who have been depriving the country from its own wealth and prosperity, this title has continued resonating in my head during the almost eight years of ministry in Guatemala.

Although this is not something new for the majority of the population (mainly Mayan) who during the civil war experienced first hand grave human right violations and were deprived of basic social services like healthcare and education. Almost thirty years after her book was published and more than fifty years after the civil war took place in Guatemala it is evident that the war continues in the already broken country.  A war having to do with massive appropriation and embezzlement of the country’s own wealth and the social outcry by different sectors of Guatemalan society has resulted in many student, academic, religious, artistic, and ecumenical groups to come together in active forms of solidarity.  Despite the outcry and discontent, the massive protests have never violated the law, but have demonstrated how a society can come together despite social and economic stratum, something that had not happened in the country before. 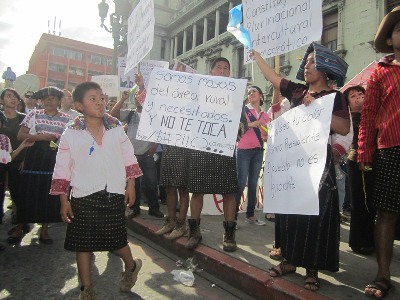 I do not know what this change will mean for Guatemala, but I do know that the country as a whole has woken up and has risen in order to collectively question and demand justice for all acts of corruption in government and respective social service sectors in order to dismantle and restructure Guatemalan society.

Global Ministries Missionaries in Guatemala
Gloria Vicente and Santos Par Vasquez serve with the Consejo Ecumenico Cristiano de Guatemala (CEGG). Their appointment is made possible by your gifts to Disciples Mission Fund, Our Churches Wider Mission, and your special gifts.