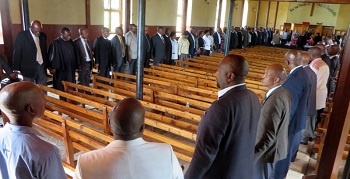 “I urge…that requests, prayers, intercession…be made for everyone – for kings and all those in authority…”
(1 Timothy 2:1-2)

For being such a small country and having less than a million registered voters, you wouldn’t think there would be many political parties in Lesotho.  But you’d be wrong.  Parties have proliferated in recent years.  Many of them have been formed by splitting off from existing parties or by disgruntled politicians who have quit their party to form a new one.  Currently there are around 25 parties and every week the papers have no shortage of political stories and drama to write about.  In November some members of parliament from the ruling coalition broke off to form a new party which, according to most observers, left the coalition without a majority.  Parliament was suddenly adjourned “indefinitely” before a vote of no confidence could take place.  Last week parliament finally reopened and the opposition is pressing hard to see that a vote soon takes place.  The uncertainty which has become the political norm here lately continues to reign.

The Lesotho Evangelical Church in Southern Africa (LECSA), through its participation in the Christian Council of Lesotho, has made numerous mediating efforts at healing political divisions in recent years.  In mid-February, a week before parliament resumed, the LECSA leadership invited all the LECSA members of parliament to Morija for a prayer service.  These members constitute more than a third of the total membership of parliament.  Among these are the current prime minister and the leaders of six other political parties.  LECSA pastors addressed the politicians on the importance of peace, unity and reconciliation.  If they took their church membership seriously, they must be representatives not just of their constituencies but of the church and Jesus Christ.  The biblical message of justice, love and peace must be embodied in how they speak and interact with one another no matter what their political affiliations may be.

The Mountain Kingdom has been bubbling with intrigue, controversy and turmoil for the past 2½ years since the alleged attempted military coup at the end of August 2014 which forced the previous prime minister into exile for about a week.  The assassination of a former army commander in June 2015 led to a regional body setting up a commission of inquiry which made numerous recommendations, most of which have not yet been implemented.  This lack of implementation has possible grave economic implications for the country.

The African Growth and Opportunity Act (AGOA) is a United States (US) trade act which has benefitted Lesotho greatly since it was enacted in 2000.  The act benefits African countries by allowing them favorable access to the US market provided they meet certain eligibility requirements regarding such things as human rights, due process and the rule of law.

The largest private sector employer in Lesotho is the textile industry which exports almost all of its products to the US because of AGOA.  Without the economic advantage AGOA provides, the Chinese and Taiwanese factory owners would likely close up shop and move elsewhere.  Over 40,000 jobs are at stake and each job probably supports four or five family members.  If you add in all the street vendors, food and transport service operators, who depend on the textile workers for business, then you are looking at several hundred thousand people whose lives will be severely impacted if Lesotho loses its eligibility for membership in AGOA.

For the past year the US government has made it clear that the lack of progress on implementing the recommendations of the commission of inquiry, as well as meeting AGOA standards on the rule of law, are putting Lesotho’s status in peril.  These threats have met with complaints of interference by the Lesotho government and resulted in some icy words in the press.  Recently the US stated that Lesotho needed to take further action towards meeting AGOA eligibility criteria in order to stay eligible for AGOA beyond March 2017.   This reprieve was welcomed since there was fear that Lesotho was going to be dropped as of January.  Now it is March and the situation here still hangs in the balance.

The issues threatening Lesotho’s participation in AGOA have already deprived the country of a 2nd compact with the Millennium Challenge Corporation (MCC).  MCC is a US foreign aid agency established by Congress in 2004.  Like AGOA, there are eligibility standards that countries have to meet.  Lesotho received a 5-year compact of $362.5 million in 2008 which vastly improved the water and health services in the country, as well as removed barriers to private sector development.  However, Lesotho’s eligibility for a 2nd compact has been deferred by MCC “until governance concerns have been addressed”.

Political divisiveness is hardly unique to Lesotho, so we can all pray for our leaders no matter where we live, as Paul requests in his first letter to Timothy.  May they be given wisdom and humility to seek reconciliation and work constructively by putting the interests of their countries and people ahead of personal political gains and grandstanding.  And may they discuss the issues “without anger or disputing” (1 Timothy 2:8).  Those are good words for us non-politicians, too!

Mark Behle serves with the Lesotho Evangelical Church. His appointment is made possible by your gifts to Disciples Mission Fund, Our Church’s Wider Mission, and your special gifts.