The conference seeks to understand mission as multivalent. That includes joyful witness to the person of Jesus Christ and his gospel; commitment to working for justice and reconciliation among all peoples; and participation in interfaith, secular, and ecumenical dialogue that seeks mutual understanding and common witness. It seeks to celebrate the unity of all peoples as it marvels at their God-given diversity. It reflects on issues of missionary practice and seeks new ways of being faithful to God’s mission with the leading of the Spirit. The theme of the 2018 Arusha Conference is Moving in the Spirit, called to Transforming Discipleship.

A representative of the WCC Reference Group on Interreligious Dialogue and Cooperation, The Program for Christian-Muslim Relations in Africa (PROCMURA) together with Danmission, and Zanzibar Interfaith Centre (Zanzic) conducted a Warsha (workshop) at the CWME Mission conference in Arusha, Tanzania. The workshop was titled: Christian-Muslims Relations in Africa: Dialogue and Diapraxis as indispensable forms of Christian Mission in Africa.

The lead presenter was Rev. Dr Johnson Mbillah, the immediate past General Adviser of PROCMURA and a member of the WCC Reference Group for Interreligious Dialogue and Cooperation. Rev. Dr Mbillah has a more than 17 years’ experience in advising churches and church-related organizations on how to constructively engage with Muslims on the African contnent. Rev. Dr. Mbillah has also participated in resolving Christian-Muslim conflicts across the continent.

Rev. Dr Mbillah co-presented with Rev. Dr Arngeir Langas from Danmission, who also has a long-standing relationship with Upendo Women Empowerment in Zanzibar, a diapraxis centre that was formed by his wife Dorthe when Arngeir and Dorthe were sent as missionaries to Zanzibar, and to Zanzibar interfaith Centre that Arngeir established at the end of his missionary stay in Zanzibar. Arngeir has also written his PhD thesis on the Joint Committee of Religious Leaders for Peace in Zanzibar, a committee supported by Zanzic. 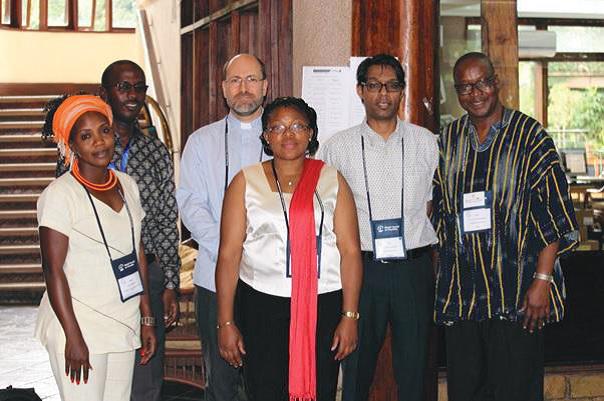 Another co-presenter was Joy Wandabwa, Team Leader, Finance and Administration of PROCMURA. As Team Leader, Joy has first-hand information on the program, and brings in valuable information on how PROCMURA functions. Together with them was Rev. Lusungu Mbilinyi, the study coordinator of Zanzibar Interfaith Centre who provided practical information of the Centre’s operations, and Rev. Dr. Salli Ndombo the Programme Officer of PROCMURA who informed participants of current publications of PROCMURA that they can have access.

The warsha (workshop) was a two-day event, where each day’s session comprised of 90 minutes. It took place on the 9th and 10th of March 2018 at the CWME Mission conference in Ngurdoto, Arusha. The warsha had a triple focus; on Relations, Dialogue, and Diapraxis as theological, missiological and existential imperatives in the churches’ engagement with Islam and Muslims in Africa. In Christianity and Christians’ encounter with Islam and Muslims, PROCMURA focuses on Christian constructive Relations with Muslims as a foundational base for interaction. The WCC sub-unit on Dialogue with People of Living Faiths and Ideologies, on the other hand, focuses on ‘strengthening inter-religious trust and respect’, while Danmission, in conjunction with the Eastern and Coastal
Diocese of the Lutheran Church in Tanzania, evolved the Diapraxis programme with the understanding that building relations and engaging in dialogue find added value in Diapraxis – tangible action.

On the first day Rev. Dr. Mbillah highlighted the historical importance of Africa in the development of both Christianity and Islam. He further pointed to the presence of God and of Jesus the Christ in Africa prior to the coming of Islam and Christianity. What Christianity did was to alert Africans of the presence of Christ and what Islam did was to get Africans to refer to God as Allah. As God was already in Africa, Islam and Christianity only brought additional perspectives on who God is as they brought the two different religions.

Dr Mbillah also highlighted some important principles in Christian-Muslim Relations in Africa, as they are put forward by PROCMURA. These include not accepting theological relativism that says “all religions are the same”, and rejecting the two approaches of either “Convert them all” or “Leave them alone”. In the context of Africa, the missiological consensus is such: conversion is an act of God, not of a human being. If we leave them alone, we are restricting the work of the Holy Spirit. In that way, building relations with Muslims is compulsory; on the other hand, also being faithful witnesses to the gospel of Christ amidst the Muslim presence is mandatory.

Dr Langas, building on the theological foundation that Mbillah had already laid, continued to show how diapraxis can be a way for Christians to do both; witnessing to our Christian faith while building relationships with Muslims. He did this by drawing examples from his personal experience from his missionary stay in Zanzibar where he used the diapraxis approach to work with the Joint Committee of Religious Leaders for Peace. Lusungu Mbilinyi further cemented on Langas’ presentation by showing how the diapraxis approach helps Christians to be a readable letter to the Muslims (2 Corinthians 3:2). Without diapraxis, we remain a closed letter, so diapraxis is a letter-opening ministry. Joy Wandabwa showed how PROCMURA work with churches and national councils of churches to promote their constructive engagement with Muslims and their programme focus on women and youth in intra-Christian and inter Christian-Muslim collaboration for peaceful coexistence in the thirty (30) countries that PROCMURA operate.

On the second day the workshop concentrated more on the phenomenon of violent radicalisation and violent extremism in which religion has been heavily implicated. Dr Mbillah highlighted the fact that being radical or extremist is not wrong in itself, but expressing radical extremist views in the form of violence leading to mayhem is the problem. Furthermore, he pointed out that radical violent extremism has been linked to both Christianity and Islam in Africa. Pointing out examples from all over Africa, he showed how some practices encourage the use of religion as a mobilization tool for political goals in what he called the Politicization of Religion and the Religionization of Politics. In his presentation he made it clear that this process is not only the fault of politicians who instrumentalise religion, but also religious leaders who get involved in partisan politics for personal gains.

The attendants of the workshop included missiologists, Christian scholars in Islam, Christian-Muslim relations practitioners, African religion(s) scholars, theologians, philosophers and enthusiasts. The sessions were very interactive, and contributions from the workshop members included concern on forms of proselytization from both Christian and Muslim groups that triggers violent conflicts between Christians and Muslims. Structural injustices were cited with participants making it clear that there are lessons from the two days workshop that Europe can learn from Africa today, as Europe experiences a change from a mainly mono-religious continent to a multi-religious one, with the influx of refugees and migrants to Europe. The facilitators of the workshop insisted that solutions to the above-mentioned challenges cannot come from such a workshop but must be home-grown. However, experiences of the workshop can be used as a starting point and point of reference when working on a home-grown solution on the said challenges.

Generally speaking, the presentations and contributions from participants of the workshop led to a general consensus that building relations engaging in dialogue and diapraxis do not jeopardize mission but are crucial and indispensable parts of mission in the African missiological landscape, where both the Great Commission (Make disciples…) and the Great commandment (Love your neighbour…) are upheld.