"And now I am no longer in the world, but they are in the world, and I am coming to you. Holy Father, protect them in your name that you have given me, so that they may be one, as we are one." John 17:11 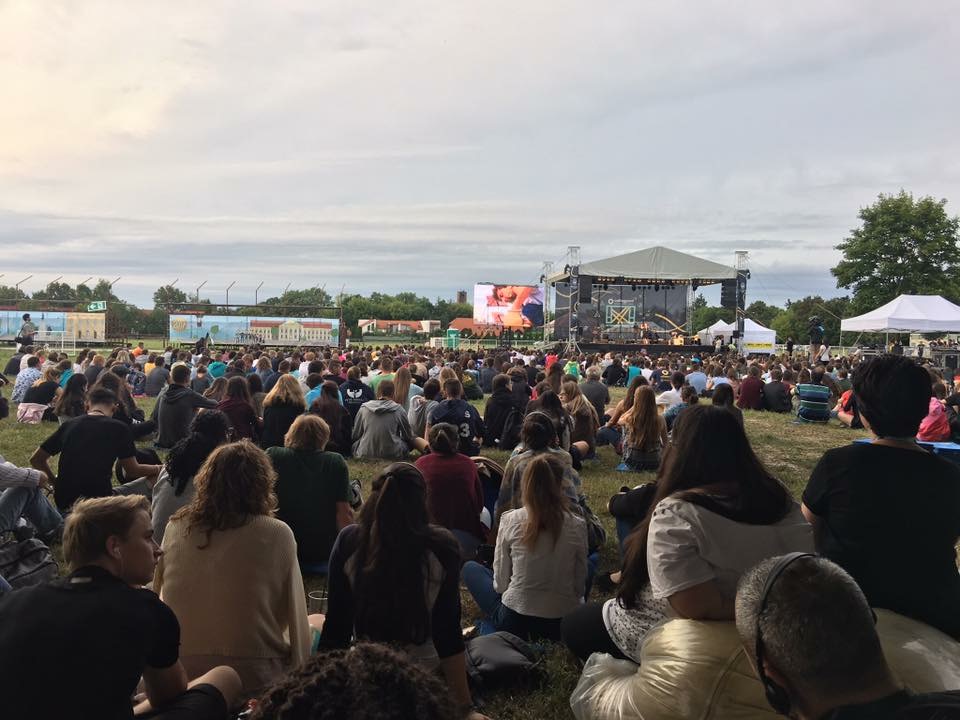 This particular scripture seems to have followed me around for the past 6 months. It was read during Easter celebrations at church, the Disciples’ General Assembly in Indianapolis, and even halfway across the world at the Csillagpont (Starpoint) Youth Festival in Debrecen, Hungary. Each time I listened to this message I was reminded of the value that comes from intentional unity. During the first two instances that I had heard this scripture, I was surrounded by other Disciples of Christ who (roughly) have the same theological views as me. The third time I heard this passage I was surrounded by people who could not have been more different from myself. Sitting in a field in the middle of the University of Debrecen’s campus surrounded by young adults from all over the world and having to use a translator just to hear the scripture had the potential to make me feel like an outsider. This trip was my first outside of the United States. I traveled for almost 20 hours across the Atlantic away from the only part of the world I had ever known. I was determined to embrace every minute of my trip yet I’ll admit to having my doubts on whether I would be accepted and loved and welcomed in the same ways that I had been back home. I was intentionally becoming an outsider and I had no idea what was going to happen over the next week.

I had no reason to be worried. From the moment I got out of my taxi into the Protestant Dormitory in Budapest I was welcomed and loved as though I was an old friend returning home. The international English-speaking group spent the first few days sight-seeing and shopping but my favorite part of those first few days was staying up all hours of the night just talking with my new international friends. By the time we were headed on the bus to Debrecen the entire group had become a family. From there we met with the French-speaking group and spent the next 4 hours singing popular and traditional Christian songs and hymns in our respective languages watching one another’s face light up as we recognized the tunes and joined in with our own language. I was in awe of God’s love at work on that trip. By the time we got to the festival I knew that I had found an authentic Christian community.

The morning devotions were introspective, the daily keynotes were bold and energetic, my small group was a place for vulnerability and grace, and the evening worship would send me off feeling fulfilled and excited for the next day. I am so grateful to say that I enjoyed every moment of that festival. The final keynote ended with what felt like the perfect scripture. Calling for intentional unity from our community of faith and breaking down our separations. The Reformed Church of Hungary was so committed to valuing that ideal that EVERYONE who attended that service was allowed and encouraged to take communion. Despite our theological differences I was still welcomed to their table just because I showed up.

I am so humbled to have had this opportunity to witness Christ’s church internationally and I have spent every day since my flight home attempting live out that kind of unity. I pray that the church can continue to do the same.

The Starpoint Festival was an astounding end to my summer and beginning to my senior year at the University of Northern Iowa. As I made my way to Budapest, Hungary I was absolutely scared out of my mind for what the next ten days would call for. I had never been out of the country before, nor had I met many people from different countries. Being from small town Iowa has many advantages, but being exposed to diversity is not necessarily one of them. 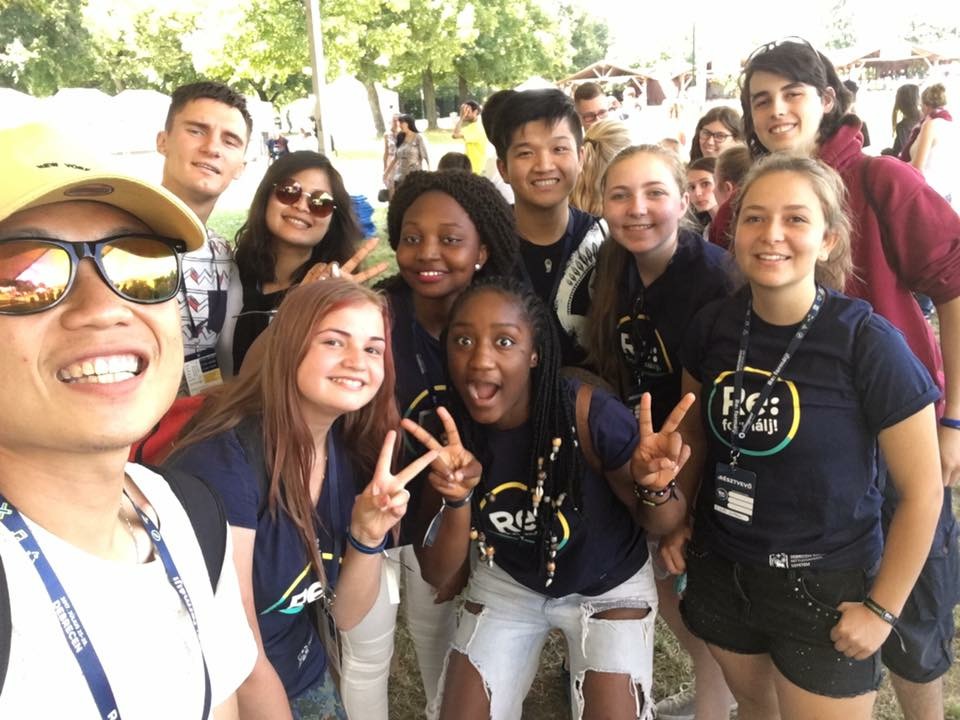 As luck would have it I was wide awake for the entire plane ride so I spent my time thinking about what this mission experience would entail, what the people would be like, what we would be doing. I also spent a lot of this ride talking to God about the various anxieties building up in my heart as we inched closer to a new and exciting adventure. When I got off the plane I was greeted by the sweetest face, Balazc, eager for the week's adventure. Being the first person to arrive to the dorms I was lucky to snag a couple hours of sleep, only to wake up to a room full of excited, nervous, kind, and joyful people. Not only did we all come to a country we had never been to before but many of us came not knowing another soul. Being in a state of vulnerability like we had never experienced before. We had people from Lithuania, the Czech Republic, Taiwan, Germany, the United Kingdom, Syria, Scotland, Canada, Russia, the United States, and of course Hungary.

After a summer of working in outreach ministry and making relationships with people from all over the world I now have a better understanding of what my calling is. To forget about all of the extra political, social, economical, (the list goes on and on) problems of this world, to let God be God, and to focus on the truth that I am simply called to LOVE God and LOVE God's people. The Starpoint Festival's theme was Reformation, and specifically how we change our hearts for the better. One of our daily devotions was focused on where we individually fall short from meeting Jesus at the cross but then recognizing that when we surrender our weight of sin to Jesus we are set free.

Isaiah 64:8 says, "Yet, O Lord, You are our Father; we are the clay, and you are our potter; we are the work of your hand." And that's just it. We're all a work in progress. The key is knowing that progress means while we're all immensely broken and unworthy of God's love and guidance, God chooses us over and over again anyways. That this world is broken and we're stuck in the pit, but at the same time Heaven IS here. Heaven is now. Heaven is in conversations about how our food is completely different from someone across the ocean. Or over a conversation about how we can better take care of the homeless by listening to how other countries help differently. It's over conversations about how age, marriage, children, universities, activities, all look different. It's in the celebration of God's creation. It's in the celebration of being the work of our potter.

Erica Fernandez, member of First Christian Church (Disciples of Christ), Cedar Falls, Iowa, is a senior at the University of Northern Iowa.

Why do we simply remain curious? Why not travel and find the answer? Over the past few years, I have developed a deep love and aspiration to travel to discover the unknown. Learning is a beautiful thing, but it becomes even more fascinating when you can explore and become the knowledge. That’s why I believe in the beauty behind traveling. You get to be part of a whole new world, gain experience, positively make an impact, and become the story. Traveling, to me, as an art, is a Godsend gift to explore this wide world we live in.

As I was preparing to travel abroad, I began questioning myself. I felt nervousness leading me into fearing the act of stepping into the unknown. For a person who loves traveling as much as living, this feeling was unusual. Realizing that God will provide wherever I go gave me a reason to stop worrying. And from there, I gained the courage and open mind to leave for Hungary when the time came.

Being home is beautiful feeling, but I cannot deny that being in a different (new) part of the world is magical. Participating in the Starpoint Festival in Debrecen, Hungary was one of the most memorable and great learning experiences I have been part of. As a recent high school graduate, this opportunity allowed me to begin to find myself as an individual while also “reforming” my faith. Likewise, the international delegates also got the opportunity to explore the capital (Budapest) and the city of Debrecen. I loved every second of the festival. You not only meet people from different backgrounds, but you also get to see how different cultures can blend in together and interact, which, to me, was/is beautiful. And more importantly, you come together as young people and witness the words of God through an entirely different culture than your own. From that, you also share ideas on how you can become a voice for others (including our home church). I am grateful to have met a large group of people from around the world through this amazing opportunity. Today, I feel blessed to know that we are “a close community/family from far away.”

Hans Christian Anderson once quoted, “to travel is to live,” and I believe in growth through learning. When in doubt or just out of curiosity, travel the world. Just go. The answer is out there; the words of God can be found anywhere. Lead your life through faith and God will provide, always.

Sabrina Ebengho, member of First Christian Church (Disciples of Christ), Tacoma, Washington, is an incoming student at the University of Washington.