Reflections on a trip to Turkey May-June 2017 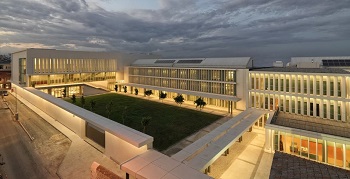 Five years after retiring to California from our appointed work in Turkey, we unexpectedly received an invitation to return. The Health and Education Foundation in Turkey asked us to join them on a weekend in May for the historical dedication of a new school campus (see photo). We had worked as colleagues with the Foundation for several years before our retirement, so we knew what this invitation meant, and we were honored to accept.

To make such a long trip after five years of separation meant that we had to reunite with as many of our friends as possible, and see all the places where we worked and lived. What differences would we find? How have the lives of our friends changed? Our excitement resulted in planning a trip of nearly four weeks. Here are some of our impressions for those readers who have been following the history of Global Ministries involvement in Turkey.

Over a period of years, the Foundation had been buying land adjacent to the historical high school campus of the Tarsus American College in the south of Turkey. As part of the expansion process, the Foundation built several school buildings on the 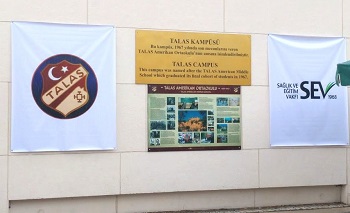 new property, one of which has won several architectural awards. (http://tinyurl.com/ycadlpb3).

On the day of the Tarsus homecoming, with hundreds of graduates present, the Foundation named the new portion of the campus as “Talas,” in honor of the middle school in Talas that had to be closed by our predecessors in 1967. The Talas school name will now live on in Tarsus on as future generations use it to navigate the campus.

Our presence at the dedication ceremony meant that ours were the faces of the historical legacy lying behind these events. We brought greetings from Global Ministries and the pride that it and we feel in the way the Foundation has cared for the schools and grown the endowment it received. There is a certain spirit of humanistic and internationally-oriented education that we see embodied in the Foundation’s schools of today. Whereas the Foundation received three high schools from the American mission board, today it supervises a total of ten schools, including one brand new high school in Istanbul.

We visited each one of these schools during our trip and met with many of their principals. Betty was impressed with their libraries and was thrilled to meet with those with whom she had worked. We also saw that the Tarsus and Izmir high schools have increasingly strong boarding programs that allow them to recruit students from all parts of Turkey. In addition, teachers from mainly North America and the UK are part of the staff of all schools. If you know of credentialed teachers of English, math, and science who would consider teaching abroad, please inform them of this opportunity.

Of course we revisited the Izmir high school where we lived and worked for 22 years. It was a delight to renew several long-time family and professional friendships and to learn of recent school successes and achievements. For instance, about half of the high school students now enroll in the IB program. Acceptance rates at universities in Turkey and abroad are impressive.

In Istanbul we visited the Foundation’s publishing company, which many readers will know as the Redhouse Press. It’s another success story, having become one of Turkey’s largest book publishers with its dictionaries, children’s books, and English language learning materials.

When we lived in Istanbul we headed the mission board’s office, which we eventually had to close prior to our retirement. The office’s library and archives have remained in Turkey. They are lodged with an American research institute in Istanbul. Some of this material has been digitized and made available to researchers on the internet (http://ccat.sas.upenn.edu/ARIT/Library.html). Much work remains to be done in making more of these archives accessible online, a task for which volunteers are always needed.

Also in Istanbul we had served with an ecumenical church program to assist the many refugees and migrants who were often stranded in Istanbul and lacked adequate resources. We revisited that program and found that this work continues vigorously with the help of many church volunteers. Food, clothing, medical care, and education continue to be offered to those in need, whose numbers have swollen with the influx of refugees from the war in Syria. Turkey has welcomed about 3.5 million such refugees and is taking steps to help them make their lives in the country. We are glad that our church can play some small role in that drama.

Betty and her predecessors collaborated with women from several different Christian communities in Istanbul who courageously reached out to each other and cooperated in staging the annual World Day of Prayer. She learned that this program of ecumenical leadership is also alive and well and an important inspiration to the women involved.

Other Americans besides us have a history of service in Turkey. We hope this picture of what we found assures them that their efforts have been fruitful.