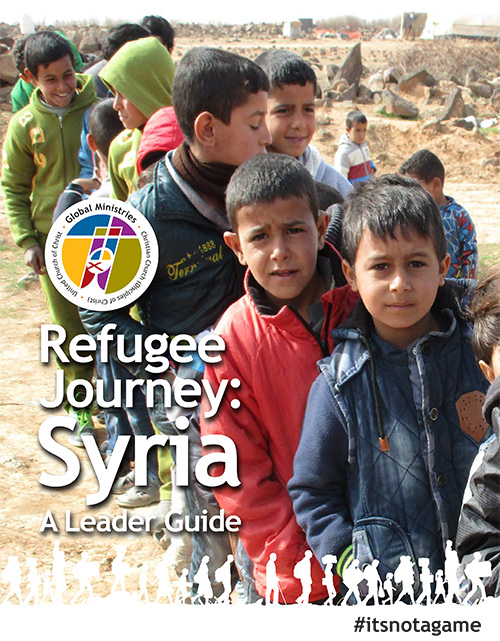 This simulation activity allows you to experience what a Syrian refugee might experience when fleeing violence in Syria and looking for a peaceful place to call home.

The crisis in Syria dates back to the early days of 2011, when peaceful protesters expressed their hopes for political and economic reforms, in the spirit of the so-called Arab Spring that was sweeping the Middle East and North Africa. The situation became violent within a few months. Since then, more than 400,000 Syrians have been killed, half of the Syrian population has been forced from their homes, and hopes for a resolution of the conflict remain dim.

The Christian Church (Disciples of Christ) and United Church of Christ have been involved in response to the crisis since the
beginning of the conflict, and continue to be involved. Our response includes prayers and education, advocacy for an end to  violence and a responsible US role, and support for the work of partners in the Middle East who continue to provide humanitarian aid to those in need.

You are encouraged to get a glimpse of what life is like for many refugees fleeing Syria through Refugee Journey: Syria, available as a free download from Global Ministries.

The following suggested links share information that may be used with Refugee Journey: Syria as introductory resources and resources for further study.

Introduction to the Syrian Crisis

Understanding the Refugee Crisis in Europe, Syria, and around the World (video)
Author and activist John Green discusses the Syrian refugee crisis and the growing number of refugees from Syria, Afghanistan, and Eritrea crossing the sea with the help of smugglers to seek refuge in European Union nations. (10 minutes)

The European Refugee Crisis and Syria Explained  (video)
A graphic primer on the situation in Syria, how it began and why it has become such a large refugee crisis. Published in 2015, keep in mind that there have been many changes in the situation since this was made. (6 minutes)

The Waypoint
In this visual essay, The Washington Post follows refugees on their journey through Lesbos to Europe. This resource accurately depicts the experience of many refugees who travel to Greece via inflatable raft, including where they stay and the conditions they live with, and illustrates the process that many go through in order to get to Europe.

A Syrian Story About The Future (video)
Syrian refugees talk about how they envision their future. (5 minutes)

Leaving Syria: Fleeing war and remembering home (Global Ministries' video)
Jade lived in Aleppo, Syria, most of his life until the war and violence there became too much for his family to bear. Now a college student living near Boston, Jade shares the story of life in Aleppo, the pain of displacement and leaving, and his memories of home. Millions of Syrians have been displaced and have become refugees as a result of the war, making Syria a tragic humanitarian crisis. (7.5 minutes)

The Journey (video)
A six-part documentary about the dangerous paths of Syrian asylum seekers in the E.U. from The New Yorker. Includes personal stories. Each part is approximately 10 minutes.

Syrian Refugees in the United States: One Family's Story (video)
Author and activist John Green meets with Syrian refugees Mufak, Nada, and their five kids in Amman, Jordan, and then a few months later shortly after the family's resettlement in Rockford, Illinois. (3.5 minutes)

We Are Displaced: My Journey and Stories from Refugee Girls Around the World (book)
In her powerful new book, Nobel Peace Prize winner and New York Times-bestselling author Malala Yousafzai introduces some of the people behind the statistics and news stories about the millions of people displaced worldwide.

Holy Discontentment: Advocacy and Action for Syria
How you can take action and advocate for an end to the conflict in Syria and for Syrian refugees.

Where is God? By Razek Siriani (Bible Study)

On Justice and Peace By Dr. Mary Mikhael (Bible Study)