Hong Kong is no stranger to refugee and asylum seeker issues. Many residents today were refugees or children of refugees fleeing mainland China in the late 1940s when Hong Kong was still under British rule. More recently, Hong Kong was a Port of First Asylum for Vietnamese refugees from 1975-1998, receiving more than 200,000 people from Vietnam who were housed in both open and closed camps. During the final years of the Vietnamese refugee era, public opinion on the issue was overwhelmingly negative. There were complaints that the cost to taxpayers was too high, that most asylum seekers were economic migrants rather than ‘genuine’ refugees, and that the Vietnamese were involved in crime and illegal activities in the community. 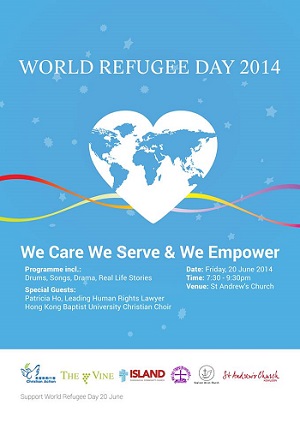 This mixed legacy of welcome and rejection impacts the current group of refugees and asylum seekers in the city who have come in the past 10-15 years. Even though Hong Kong does not accept refugees for resettlement, there are around 6000 persons living here seeking asylum and roughly 100 who have been given refugee status by the local United Nations’ office. The majority are from South Asia and Africa. However, since Hong Kong has not signed the Refugee Convention, the government says it has no obligation to care for any refugee or asylum seeker who lands here. In fact, they are subject to arrest and detention. The government claims that this strict policy is necessary because Hong Kong is a small, crowded place that cannot take in everyone who wants to come.

Public opinion is still overwhelmingly negative towards this group, but they have been helped by human rights lawyers, NGOs, and Christian churches and organizations in order to survive. The system for processing asylum claims and refugee resettlement is extremely complicated and may take years to resolve. It may also involve arrest and detention as part of the process, with release into the community afterwards. In the meantime, Hong Kong is an expensive city. It is difficult to stay here without a job, relatives or friends. After court rulings, the government finally began to offer bare minimum support to refugees and asylum seekers for legal aid, housing, food and medical care. The amount is so small that recipients are forced to rely on charities or to work illegally in order to make ends meet. It is not a situation that promotes respect, fairness or human dignity.

Christians have been active in caring for refugees and asylum seekers in congregations and through support of Christian NGOs that serve this vulnerable population. The Refugee Concern Network was established a few years ago to coordinate efforts and share resources. Hong Kong Christian Council, a partner of Global Ministries, is part of the network and is involved through one of our member organizations – Christian Action.

World Refugee Day 2014 drew a crowd of over three hundred on June 20th to St. Andrew’s Church in Kowloon. During the lively program of music, drama and real life stories, the director of the refugee program of Christian Action gave a message to protection claimants in the audience: “Be strong. Truth will never fail.” That brought tears to the eyes of many. Then she told those who are concerned about refugees and asylum seekers that there were three things we could do: (1) Be better informed. (2) Show hospitality to the stranger, and (3) Stand up and speak out because you can make a difference.

One refugee who shared his story spoke of the importance of Christian faith in keeping him from giving up. He fled his country 10 years ago in order to save his life, leaving behind everything including his wife and five children. He has not seen them since. Recently he was the first among a handful of refugees who have been given the right to live and work in Hong Kong. Through all the fear and hardship, he trusted God to make a way out of no way. In closing, he asked us to join him in singing “Spirit Song”, a praise hymn that sustained him in times of trial. The words that hit me hardest were from the second verse:

O give Him all your tears and sadness

Give Him all your years of pain

And you'll enter into life in Jesus' name

What a moving testimony to the strength and courage of asylum seekers and refugees in Hong Kong seeking a safe place to call home. May we welcome them in our midst that we too might enter into life in Jesus’ name.

Judy Chan serves with the Hong Kong Christian Council in the area of ecumenical communications, bringing Christians from the Protestant, Anglican, Orthodox and Roman Catholic churches together in ministry through radio broadcasting.